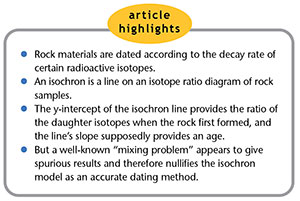 Radioactive dating is based on the decay rate of a starting radioactive isotope (the parent) into its stable counterpart (the daughter). An age is assigned to an object by measuring the quantity of each isotope and calculating how long it would take for the parent to decay into the daughter. Since the mid-20th century, the isochron age model has been the standard for dating rocks, minerals, and crystals via the decay of certain radioisotopes they contain.

This model had its origins in a rather obtuse paper published in 1960. Ironically, even the authors of this paper admitted that the potassium feldspars from the granitic rocks they analyzed gave a wide range of supposed ages. It’s widely claimed that this model eliminates the need for any assumptions about the initial amount of the daughter isotopes when dating an object using the decay of specific isotopes within that object. But does it?

In the next two articles we’ll take a closer look at the isochron age model and evaluate its ability to accurately assess the absolute historical age of an object. We will use the Rb-Sr (rubidium-strontium) decay pair for demonstration since it employs the least number of secondary assumptions among the various decay pairs used in radioisotope dating.