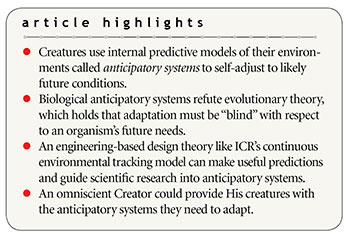 On January 1, 2019, the American spacecraft New Horizons gathered close-up images of a rocky object over four billion miles from Earth. New Horizons launched in 2006 and was guided over three billion miles to rendezvous with Pluto (less than 1,500 miles in diameter) in 2015. Then it surpassed that accomplishment by traveling another billion miles to intercept a mere 21-mile-long, snowman-shaped rock as 2019 dawned.

The engineering prowess it took to achieve this is staggering. Engineers used mathematical models to anticipate the future locations of all three objects. A high-tech tracking system monitored New Horizons as engineers on Earth made extremely fine course corrections. The same engineering principles that govern these advanced human-engineered systems likely underlie the sophisticated anticipatory systems inside of creatures so they can both predict and then prepare for future environmental conditions—but through fully self-contained mechanisms. 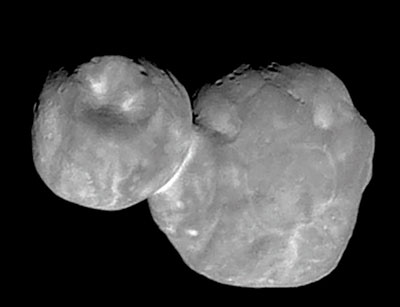 Previously in this article series, we’ve considered the way organisms use innate logic mechanisms to rapidly produce solutions to environmental challenges that are so targeted they can be predicted.1 This observation deals a serious blow to the central anti-design tenet of evolutionary theory, which holds that evolutionary change must be random with respect to an organism’s future needs.

Now we’ll see that many adaptations are not just reactive in real time but rather flow from logic-based systems that give creatures foresight—both conscious and unconscious—of how they ought to preemptively self-adjust to predicted external conditions. Given that biological anticipatory adaptive systems are both predictive in nature and extend the design features of reactive systems to new heights, their impact is substantial support for ICR’s design-based continuous environmental tracking (CET) model and against chance-based evolution.

A distinctive tenet of the CET model is that it predicts a tight correlation between the elements in human-designed systems with those in biological systems that perform similar functions. Therefore, if humans develop complicated models to forecast the weather or celestial motions, and if creatures are expected to continuously track changing conditions, then a design-based theory should predict that organisms would also have innate anticipatory systems.

We’ll consider the basic elements of these fascinating systems and how they fit into the CET model. But first, we need to simply observe organisms. Are there any indicators of an internal capability to forecast impending challenges and then—in clear anticipation—tailor their expression of suitable traits and behaviors? Yes! 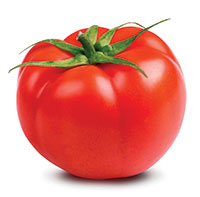 A report in 2018 described a study showing how tomato plants can detect snail mucus that is merely in close proximity rather than in direct contact. It stated:

New research now shows some flora can detect an herbivorous animal well before it launches an assault, letting a plant mount a preemptive defense that even works against other pest species….“None of the plants were ever actually attacked,” [lead investigator John] Orrock says. “We just gave them cues that suggested an attack was coming, and that was enough to trigger big changes in their chemistry.”2

Orrock’s paper in Oecologia points to innate anticipatory logic coordinating “a defensive response in plants that have not been attacked.…Plants integrate the many sources of information regarding attack in their environment to optimize investment in defense…[so] that plants prioritize risk information…whereby information that is likely linked with greater imminent risk triggers a stronger defense.”3

Most organisms are constantly faced with environmental changes and stressors. In diverse organisms, there is an anticipatory mechanism during development that can program adult phenotypes. The adult phenotype would be adapted to the predicted environment that occurred during organism maturation.4

Developing honeybees responded in this manner when they were exposed to nutritional deprivation. An Arizona State University news release reported:

Wang’s technical article notes that anticipatory self-adjustments are not trivial, but “that adaptive phenotypic changes are induced at the physiological, molecular and behavioral levels.”4

In one four-month experiment, a group of sea urchins was kept at average ocean temperatures and pH while another group was kept at colder temperatures and low pH conditions. During that time, females in both groups reproduced. Embryos then developed in either high or low pH levels. Researchers examined every gene activated during early development to see if traits suitable to the anticipated conditions were expressed. Principle investigator Gretchen Hofmann said of the study’s results:

It was more dramatic than we expected….It’s almost like the female could sense that her progeny were about to be released into some challenging conditions for early-stage development. In response, she primed her offspring and gave them tools to face stressful conditions. It’s like she packed them a backpack of tools.6

Hofmann’s scientific report infers “that transgenerational plasticity in situ could act as an important mechanism by which populations might keep pace with [i.e., track] rapid environmental change.”7 This anticipatory mechanism certainly functions in line with the purpose expected by the CET model. 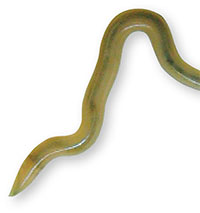 A Duke University study on the tiny worm C. elegans uncovered “a genetic network that mediates effects of a mother’s diet on the size and starvation resistance of her offspring,” a network that functions “to transmit information about her diet to her offspring.”8 Study leader L. Ryan Baugh said, “These animals are able to anticipate adverse conditions based on their mothers’ experience” and believes that “mom somehow provisions the embryo, or programs it.”9 The technical report surmised that “such effects of diet across generations is likely relevant to human diseases related to nutrient sensing and storage.”8

Another recent paper documented multiple examples where “changes in the parental phenotype can act as a signal to offspring about the future environment that they will encounter and these parental cues can induce adaptive plasticity in offspring characteristics (adaptive transgenerational phenotypic plasticity or adaptive parental effects).” Therefore, anticipatory mechanisms appear to be widespread, as “maternal stress can play adaptive roles across a wide variety of animal taxa if stress-induced phenotypes better prepare offspring for a stressful postnatal environment.”10 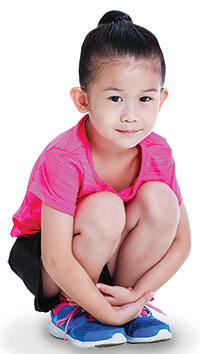 The relevance of anticipatory systems to human diseases is real. This may occur when the predicted conditions that offspring prepare for in development don’t match the conditions they face in adulthood. A recent study compared the health status of residents in a Chinese city who had prenatal exposure to the severe 1958–1962 famine (about 35 million lives were lost) to those who were not exposed.11 A protective anticipatory trait in children born to starving parents was the tendency to “horde” extra nutritional calories by storing them as fat. However, after the famine they grew up in a more abundant caloric environment. Unfortunately, prenatal exposure to famine was associated with increased risk of weight gain, type 2 diabetes, and hyperglycemia as adults. The odds of developing hyperglycemia were about 2:1 in both children and grandchildren. The probability of type 2 diabetes in the children of starved parents was about 75% higher. The risk of developing disease was higher if both parents were starved.

The details of how biological anticipatory systems work are poorly understood. This is where a framework for biological design theory proves beneficial. If an engineering-based theoretical assumption is valid that there will be a tight correlation in system elements between poorly understood biological systems and well-understood man-made systems, then it should guide research by predicting what to look for.

Foremost—and in sharp contrast to all selectionist notions—we should expect that anticipatory capacity is fully internal to creatures. The formal anticipatory system definition provided by Robert Rosen and his student Aloisius Louie, pioneers in conceptualizing biological anticipatory systems, captures its internalistic nature:

An anticipatory system is a natural system that contains an internal predictive model of itself and of its environment, which allows it to change state at an instant in accord with the model’s predictions pertaining to a later instant.12

All the examples above point to internal mechanisms. Additionally, recent research on behavioral flexibility conferred by “foresight” derived from anticipatory systems within arthropods said they “seem to use internal models of the surrounding world to tailor their actions adaptively to predict the imminent future.” But later, the researchers candidly added, “We currently have no information about the circuitry that underpins the imagination of possible future states or problem solutions.”13

But human-engineered anticipatory models are well-understood. From an engineering standpoint, such models could give clues to system elements that are likely to be discovered in biological anticipatory mechanisms. For example, models that forecast weather assimilate a minimum of:

The CET model would predict that biological anticipatory systems likely have key elements comparable to these four. The outputs of weather models serve as inputs for people to plan outdoor activities. Similarly, after biological foresight emerges from anticipatory mechanisms, it’s an input for other systems that guide developmental or physiological and behavioral actions.

We know that biological systems can model natural phenomena. Through experiments on astronauts catching a ball on Earth and in zero gravity, scientists found evidence for internal modeling of gravitational effects on moving objects. They said:

We conclude, therefore, that when catching a falling ball, the nervous system uses a second-order internal model [the ratio of the size of the object’s retinal image (r) to its rate of change (dr/dt)] of gravity to estimate TTC [Time To Catch].15

The location(s) where and exactly how this logic is modeled is unclear.

Given essential performance parameters, the engineering-based CET model would predict that an interface exists within organisms to facilitate rapid switches between anticipatory and purely reactive mechanisms to enhance adaptive responses. In addition, there should be a mechanism akin to human-engineered artificial intelligence to self-modify the entire anticipatory mechanism. This would enable it to “learn” from prior experience, refine responses, and not necessarily produce cookie-cutter actions even if exposed in the future to the same conditions.

For those with eyes to see...both the genius and tender provision of their Creator, the Lord Jesus Christ, are clearly seen.

Biological anticipatory systems are real, and creatures use them to closely track environmental changes. Not only do they fit perfectly within the CET model, an engineering-based theory of design shows its scientific value by making useful predictions to guide scientific research into these poorly understood mechanisms.

What can we say about systems that enable creatures to act preemptively, provision for the future, prime their young, or allow a mother to “pack” her offspring with “a backpack of tools”? For those with eyes to see, they burst with such purpose-driven activity that both the genius and tender provision of their Creator, the Lord Jesus Christ, are clearly seen.