First, its beak is long and curved like a modern hornbill. That’s a first among the many birds trapped in Cretaceous rock layers alongside fishes, dinosaurs, and crocodilians. The research team published details of the find in the journal Nature, which they named Falcatakely. They used computed tomography (CT) scans to collect images while preserving the fragile fossil.1 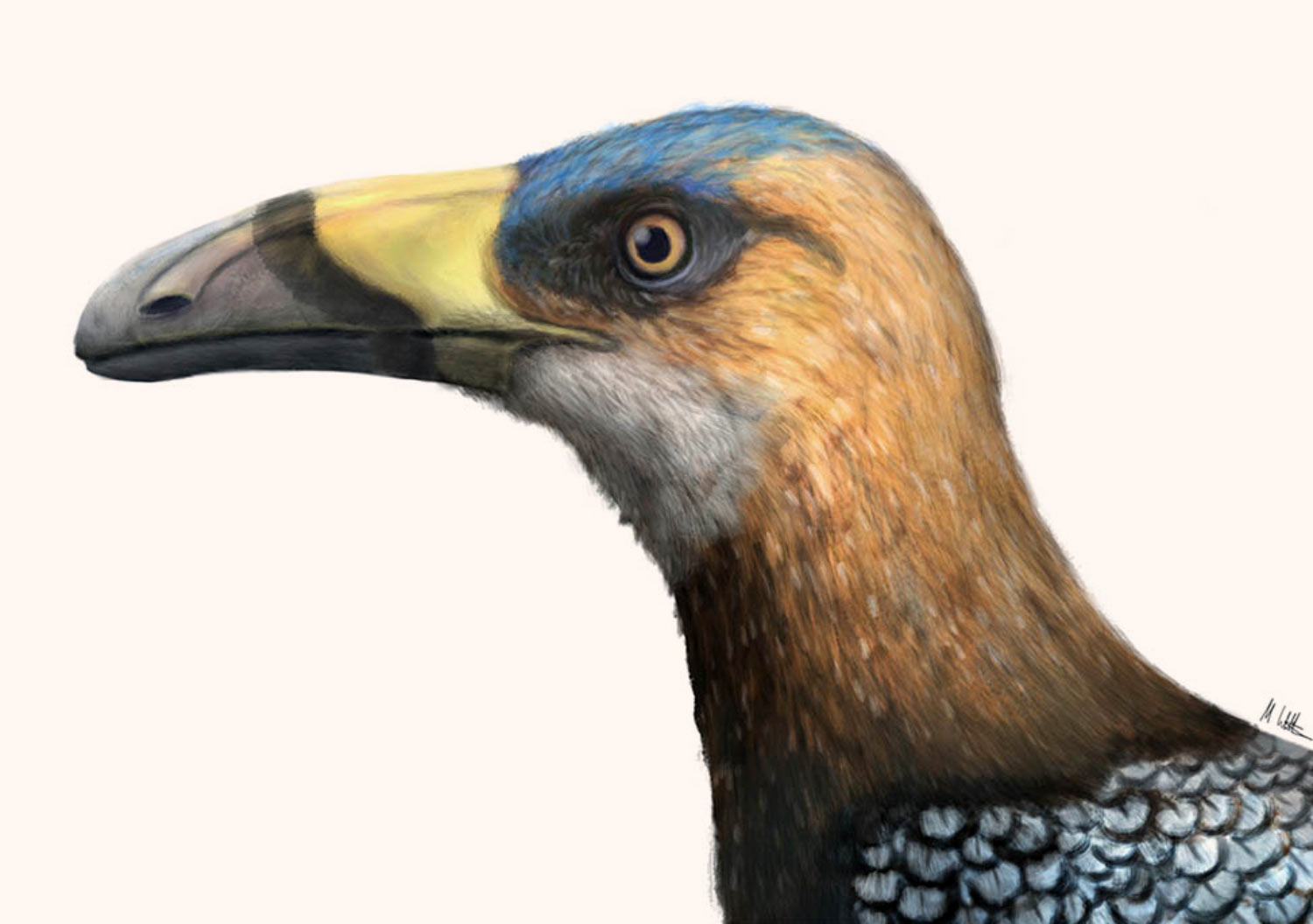 Artist reconstruction of the bird Falcatakely forsterae with its unique beak.
Image credit: Mark Witton.
It turns out the bird had an unfamiliar skull understructure from which its familiar beak shape grew during development. According to Stony Brook University News that reported on the find, that means this extinct bird evolved a way to grow a hornbill-like beak without a hornbill-like skull.2 What does this imply for the origin of this and other birds?

To those who wouldn’t be able to publish results without first phrasing them in evolutionary terms, this means that two separate types of birds happened to evolve two separate ways of making the same basic beak shape.

However, Stony Brook’s Alan Turner who coauthored the Nature paper admitted, “We don’t really know why certain beak shapes evolve....”2 Why don’t researchers know this? Likely because no data exist to document this page in evolution’s story. Whether fossil or living, birds already have fully formed beaks. Where is the evidence for an almost-bird with a snout becoming a beak? Such an object would draw universally hallowed veneration from secular institutions if it existed, but it doesn’t. And if the fossils really document eons of slow and gradual evolution, then countless fossils should record at least one of the two tracks that supposedly led to curved bird beaks.

The absence of beak evolution might motivate some who ask why certain beak shapes evolve to instead ask whether beaks evolved at all.3

Not only do fossils show no evidence for beak evolution, but Turner also revealed three anatomic reasons against evolutionary origins.4 He went on to say, “…but we do know they are used for a multitude of functions such as object manipulation, feather grooming, feeding, and other life-sustaining behaviors.”2

No beaks means no manipulating objects. That means no nest and no home to raise chicks. Without beaks, birds could not groom their feathers. They couldn’t even fly! Just like today’s birds, the extinct ones would not last a day, nor therefore have existed at all, not without their beaks and feathers and bodies all integrated at one time.

This extinct bird had all of its necessary parts in one place, each one the right size and shape to coordinate “life-sustaining behaviors” at the same time. Yet for the natural processes of Darwinian evolution to construct Falcatakely or any other bird, the necessary parts would have the impossible task of coming together one piece at a time.5

This unique bird’s fully formed and interdependent features place it far beyond evolution’s reach. And that makes a “God who created all things through Jesus Christ”6 the most scientifically responsible answer to the question of where Falcatakely and its beak came from.

Stage image: Illustration of Falcatakely with dinosaurs and other creatures in Madagascar.
Stage image credit: Mark Witton. Copyright © 2020. Adapted for use in accordance with federal copyright (fair use doctrine) law. Usage by ICR does not imply endorsement of copyright holders.

References
1. O’Connor, P. et al. 2020. Late Cretaceous bird from Madagascar reveals unique development of beaks. Nature. Published online before print, November 25, 2020, accessed December 1, 2020.
2. Rare Cretaceous-age Fossil Opens New Chapter in Story of Bird Evolution. Stony Brook University News. Posted on news.stonybrook.edu November 25, accesses December 1, 2020.
3. Of course, bird beak shapes do change today. But these shifts, for example as occur in Geospiza, happen via internal programming that speaks of design. See Skinner, M. K. et al. 2014. Epigenetics and the Evolution of Darwin's Finches. Genome Biology and Evolution. 6 (8): 1972-1989.
4. By “evolution” we refer not to programmed shape alterations to existing beaks (see ref. 3), but to the de novo addition of a beak to a non-beaked ancestor.
5. “Natural selection acts only by taking advantage of slight successive variations; she can never take a sudden leap, but must advance by short and sure though slow steps.” Darwin, C. 1866. On the Origin of Species, 4th ed. London: John Murray, 232.
6. Ephesians 3:9.

*Dr. Brian Thomas is Research Associate at the Institute for Creation Research and earned his Ph.D. in paleobiochemistry from the University of Liverpool.
More Ice Age