NEWS     CREATION SCIENCE UPDATE     DNA WAS CREATED AS A RESERVOIR FOR THE INFORMATION OF LIFE
Australopith Child Gets an Academic Spanking
BY JEFFREY P. TOMKINS, PH.D. *  |
MONDAY, SEPTEMBER 29, 2014 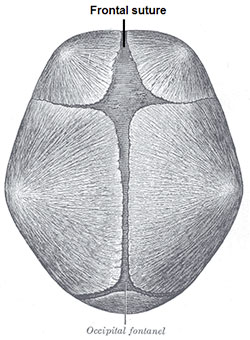 One of the key differences of skull development between humans and apes is the time of closure for the frontal (metopic) suture—a line of dense connective tissue at the front of the skull (see image below). Skull sutures close up as the connective tissue is invaded by bone-making cells that, during development, either fuse or "zipper" the skull bones together. In apes, the sutures in the skull are completely, or nearly, closed up at the time of birth. Because humans have larger brains than apes, these sutures (also called fontanelles) are much larger at birth and allow for the baby's skull to slightly compress at the time of delivery through the birth canal. On average, these fontanelles in humans complete their closure between 12-14 months of age, but may not completely close up until five years of age—which allows for much larger development of the human brain.

The Taung child skull (discovered in 1924), is an australopithecine juvenile estimated to be about 3 to 4 years of age and thought to represent the best and earliest evidence of hominid brain evolution during development. It was also recently hypothesized that the Taung skull contained signs of delayed cranial sutures that were not fully closed during a preliminary analysis of an endocast (internal cast of the skull).2 However, in this new study, researchers questioned the previous crude analysis of the endocast and performed a more exacting and advanced analysis of the skull using techniques that included high-resolution computed tomography.1

The problems with the previous study, as noted by the authors of the current effort, are three-fold. 1) The endocast had numerous calcite [mineral] deposits on it that obscured the real contours of the surface. 2) The remnants of the inside of the cranium that adhered to the endocast also obscured the true surface. 3) The discoverer of the fossil skull damaged it by the "exuberant use of his wife's knitting needles to extricate the fossil from the surrounding breccia [rock material] may have scarred the surfaces, forever obliterating some of the original features of the natural endocast."1 Essentially, the cranium is too obscured and damaged to make any reasonable observations without advanced imaging techniques that circumvent these issues—such as those done in the current study.

Other studies in zoological anatomy indicate that the various species of alleged earliest hominids in the genus called Australopithecus represent nothing more than different varieties of an extinct ape kind.3 Indeed, other recent research also indicates that these creatures were primarily tree dwelling primates and not transitional ground dwelling hominids.4

Strong evidence suggests that this young Australopithecus skull comes from an ape—just like the rest of its genus. Once again, when scrutinized by advanced imaging technology, the highly subjective field of anthropology vindicates the scientifically accurate biblical claim that mankind is created uniquely in the image of God.

Image credit: Didier Descouens. Adapted for use in accordance with federal copyright (fair use doctrine) law. Usage by ICR does not imply endorsement of copyright holders.