Underneath a spectacular rock formation in Natural Bridges National Monument in Utah is a rock carving that resembles a sauropod dinosaur. The petroglyph has been presented as evidence supporting the biblical creation model prediction that man and dinosaurs lived together. In a new report, researchers claim to "discredit" this interesting artifact. How successful was their effort?

Sauropods, such as Diplodocus, were dinosaurs that walked on four feet. According to the evolution-assigned ages of the rock layers in which their fossils are found, sauropods died out 65 million years ago.1 Thus, there should be no evidence of any kind that humans, who supposedly arrived on earth about two million years ago, interacted with long-dead dinosaurs.2

Evolutionary biologist Phil Senter was initially impressed with what he saw in Utah. He told Discovery News, "We got there and I couldn't believe it. It looked just like a sauropod."3 However, he co-authored a paper in the online journal Paleontologica Electronica that asserts the sauropod-like image is not what it appears to be. Instead, Senter and western glyph expert Sally Cole wrote that it is "a composite of two separate petroglyphs" and that its apparent "legs" were created by a mud or mineral stain.4 They claimed that this artifact is now officially discredited, which of course would be good news for evolution's "dinosaur age" and bad news for the creation model of earth history. Fortunately, since the "methods" used in this study involved mostly just looking at the artifact, virtually anyone can cross-check these authors' observations.

Also fortunately, Institute for Creation Research IT Manager Daryl Robbins documented this petroglyph during a mission trip to an area Navajo reservation in the summer of 2010. Do his photographs accompanying this article support the new claim that what looks like a sauropod is actually a combination of a snake and a stain?

To make this and similar rock-carved images, ancient natives used an object to chip away original rock material in a process called "pecking," which leaves behind tiny divots. Senter and Cole stated, "The 'legs' are not part of the image and are not pecked or otherwise human-made but are stains of mud or some light-colored mineral on the irregular surface."4 As their sketch below shows, they maintain that what looks like a dinosaur is really a snake glyph with a stain below it. 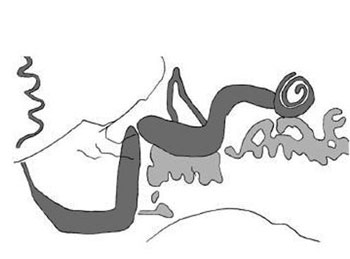 However, peck marks extend down into the presumed body of this petroglyph, even extending down into the area where front legs should be. Their sketch shows a snake or tube, but where in the actual glyph is the line for the snake's belly, where the pecking should stop and the stains start? For that matter, perhaps the artist was depicting the creature in its natural watery habitat, which would obscure the legs. If so, then this would lend even more credibility to the sauropod interpretation of the glyph.

The body and some leg-area pecking divots were obvious to Robbins, who after reading Senter and Cole's report said, "From my picture [below], it is clear that the whole dinosaur shape is chipped into the rock surface, not just a mud stain. It's pretty sad when a lowly IT guy does better science investigation than scientists." 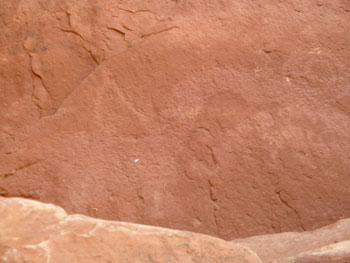 There is a difference between being debunked and just being declared debunked. Perhaps this petroglyph has not really been discredited as a dinosaur after all.

To be fair, this particular dinosaurian representation is not the highest quality of its kind. ICR Senior Science Lecturer Frank Sherwin visited this petroglyph a number of years ago. He commented that although it looked interesting to him, he did not consider it to be as compelling as other historical evidence—such as dinosaur original soft tissues,5 written or sculpted eyewitness accounts of dragon encounters from all over the world,6 or certain Bible passages like Job 40—that have convinced him that dinosaurs and man were contemporaneous. The case for creation does not hinge on this one Utah artifact.

Those who claim to have "debunked" evidence of man and dinosaur coexistence have an admitted staunch evolutionary bias. Senter and Cole put it this way:

The findings of mainstream geology have firmly established that non-avian dinosaurs became extinct 65 million years ago when the Mesozoic Era gave way to the Cenozoic Era, and that Homo sapiens appeared less than one million years ago.4

But this statement is inaccurate. Mainstream geologists did not "find" evidence in favor of this view but have merely accommodated evidence into the pre-existing evolutionary scheme. For example, the very technique used to "determine" the age of a particular dinosaur fossil is circular. They first see whether it is a dinosaur fossil. If so, then the fossil is assigned an age of no younger than "65 million years" because that number marks the end of the "age of dinosaurs" in textbook diagrams. But this is a bad, self-serving technique.

Historian Adrienne Mayor investigated Native American legends and artifacts depicting dinosaur-like creatures and stated the real reason evolutionists believe these evidences cannot possibly be interpreted in the most straightforward way. She stated, "No human beings ever saw a living dinosaur, unless they could magically travel back in time more than 65 million years."7 Thus, the religiously held doctrine of millions of years, not the evidence itself, forces these evolutionists to try to "debunk" what would otherwise be a plain testimony: that humans and dinosaurs coexisted.

Cole sketch credit: Copyright © 2011 Palaeontological Association. Adapted for use in accordance with federal copyright (fair use doctrine) law. Usage by ICR does not imply endorsement of copyright holders.