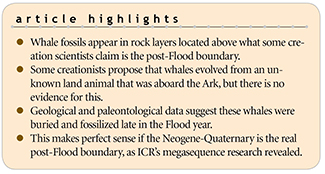 In 2018, as a complement to ICR’s ongoing megasequence research, ICR scientists Drs. Jeffrey Tomkins and Tim Clarey described the beginning of a research project to document fossils formed late in the Genesis Flood.1 Earlier, our study of global oil well data and rock outcrops demonstrated that the Genesis Flood deposits range from near the base of the Cambrian System up through Neogene strata in the upper Cenozoic.2-4 Study of global fossils and geological data confirms the end of the Flood is late in the rock record at the Neogene-Quaternary (N-Q) boundary.

Many types of animal and plant fossils first appear in the uppermost sedimentary rock layers that are part of the Tejas Megasequence, which corresponds to the Paleogene and Neogene rock units of the Cenozoic. These fossils represent plants and creatures that inhabited ecological zones at higher elevations in non-coastal temperate regions in the pre-Flood world and were buried late in the global Flood. Documented evidence shows marine mammals, including whales, first appear in Cenozoic strata as well (Figure 1).1,5-8 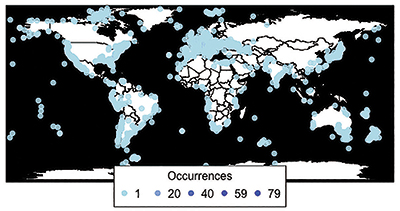 In fact, whale fossils are located on the coastal margins of nearly every major landmass and are also found across the entire continent of Europe. This is not surprising since ICR’s Column Project has shown that Cenozoic marine sediments cover most of Europe.9

Unfortunately, some creation scientists have prematurely placed the post-Flood boundary at the end of the earlier Cretaceous System. So, how do they explain the sudden appearance of whale fossils beyond this boundary? They claim these large marine mammals evolved rapidly from ancestors that walked out of the Ark.10

But did whales really evolve from land-dwelling Ark ancestors? Whale evolution would have required numerous and exceptionally rapid changes in anatomy and physiology. There is no evidence to support this idea from either genetics or the fossil record.

Some suggest that these whales were fossilized in localized post-Flood catastrophes, but pervasive global distribution of whale fossils debunks this claim. Even secular research has shown that a massive global extinction event that involved many marine mammals occurred near the top of the Pliocene (uppermost Neogene), just below the Quaternary boundary.11 The global Flood easily explains this apparent extinction.

ICR’s contention that the N-Q boundary in the rock record marks the end of the Flood not only matches global megasequence data and paleontology but also debunks rapid whale evolution and other untenable early-Flood boundary ideas. We expect future findings will continue to affirm this boundary as the true ending to the watery catastrophe recorded in Genesis.