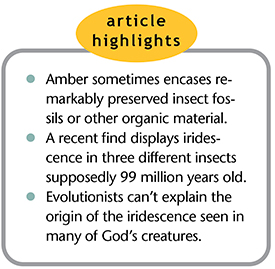 Fossilized tree resin is called amber. Its translucent sheen and natural beauty have been appreciated for centuries. Amber is mentioned four times in Scripture, such as in Ezekiel 1:4:

Then I looked, and behold, a whirlwind was coming out of the north, a great cloud with raging fire engulfing itself; and brightness was all around it and radiating out of its midst like the color of amber, out of the midst of the fire.1

In the pre-Flood world, animal and plant material was caught in the sticky resin that solidified into amber. Many of these specimens survived the global Flood that happened around 4,500 years ago. Worms, frogs, lizards, crustaceans, spiders, and insects such as bees and cockroaches have been discovered, many remarkably preserved and all within their individual created kinds. For example, a class of mollusc called a gastropod (i.e., snail) complete with soft tissue, “exceptional soft-bodied preservation,” was found in mid-Cretaceous amber—about 90 million years old by evolutionary dating.2 Even an amber-encased bird3 and a snake4 have been found. 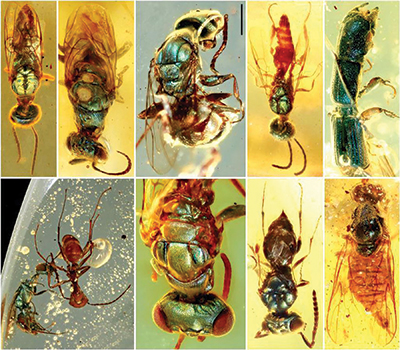 Recently, paleontologists made a rare find in northern Myanmar (also known as Burma)—three fossil insects entombed in amber.5 What makes the discovery amazing is that according to the evolutionists the wasp, beetle, and fly were 99 million years old but “their true color could be identified.” The insects have “iridescent structural hues,” or fine colors produced on the surface of their bodies by the interference of reflected light. “Blue, green, and purple iridescent colors are all clearly visible in the specimens.”5

God designed the exoskeletons of the insects in such a way as to cause light waves to combine with one another, a phenomenon called interference. Depending on the viewing angle, a combination of constructive and destructive interference causes colors on the insect to change, much like the rainbow sheen on a soap bubble. This is true not only in these particular insects but throughout God’s creation, from beetles to hummingbirds.

How did these insects achieve such iridescent hues? Was it by time and chance, or plan and purpose?

An evolutionist who wasn’t part of the study, University of West Virginia paleobiologist James Lamsdell, says, “They seem to have each evolved iridescent traits independently.”5 The article reporting the find stated that this was frustrating, and “although scientists can speculate as to what evolutionary pressures drove all these different insects to iridescence, there’s no way to know for sure.”5 According to evolutionists, the significance of iridescence “remains elusive.”6

Creation scientists suggest that as long as iridescence is seen as originating through blind evolutionary “pressures,” evolutionists will never know its origin for sure. Because the amber was found within the Cretaceous period, “that means there’s no way to trace the evolution of these iridescent traits back further in time.”5 Translated, the evolutionists are admitting that insect iridescence shows up suddenly and fully formed in a very un-Darwinian manner.

Could it possibly be God who designed this sophisticated effect, showing the full shimmering vivid spectrum of colors purely for aesthetic value? He created all things in this world for His pleasure (Revelation 4:11, KJV), and we get to share in their beauty too.