What exactly was the leviathan described so vividly in Job 41? Was it a swimming reptile like a plesiosaur or a mosasaur, or something we have yet to unearth? We may never know the answer for certain, but the latest discovery of a large, semiaquatic dinosaur offers another possibility.1

Most specimens of the large theropod dinosaur Spinosaurus, made famous by the Jurassic Park movies as the dinosaur that defeated T. rex, are found in North Africa. Whether an encounter between the two would have had the same result in reality is highly unlikely. But, the latest estimate has this dinosaur a bit longer than T. rex, coming in at 50 feet from snout to tail.1

Spinosaurs were designed with a bony sail on their backs, up to seven feet high. Its exact purpose is unclear. Recent research indicates that spinosaurs spent a considerable part of their lives in water, eating fish and other aquatic prey.1,2 They had long, narrow jaws with round, reptile-like teeth in the lower jaw and larger, more dinosaur-like teeth in their upper jaw. And unlike most theropod dinosaurs, they had solid limb bones for better buoyancy and shorter hind legs—a feature common to semiaquatic vertebrates like crocodiles.1 The flexible tail and the shape of the tail bones suggest they used their tail for swimming. Spinosaurs seem perfectly designed to live in aquatic settings like modern crocodiles, possibly possessing webbed, paddle-like hind feet and nostrils placed high on their skulls.1 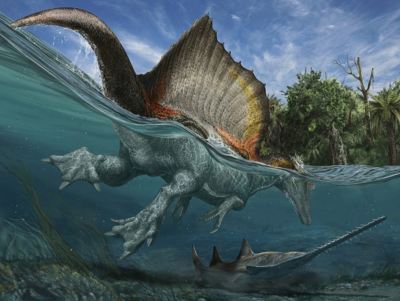 Could the leviathan described in Job 41 be a description of a semiaquatic dinosaur like the Spinosaurus? “Who can open the doors of his face, with his terrible teeth all around?” (v. 14). “Darts are regarded as straw; he laughs at the threat of javelins. His undersides are like sharp potsherds; he spreads pointed marks in the mire” (vv. 29-30). “He leaves a shining wake behind him; one would think the deep had white hair. On earth there is nothing like him, which is made without fear” (vv. 32-33).

These descriptive words indicate a large, ferocious animal that crawled or walked on the bottom of a river or shallow body of water, similar to the suggested behavior of Spinosaurus.1 The “wake [or path] behind him” may refer to the trail the bony sail left in the water as it swam.

It seems God pointed out two of the largest dinosaurs known to mankind in Job 40 and 41. One was a large plant-eater (behemoth), and the other was the “king over all the children of pride” (Job 41:34). Both of these animals could have been right there in or near the rivers where Job resided.

It is unlikely the leviathan in Job 41 was a mosasaur, as they didn’t have the anatomy necessary to crawl on land and leave “marks in the mire,” or mud.3 We can likewise discount the plesiosaur for similar reasons. And it is possible that the leviathan in Psalm 104:25-26 and Isaiah 27:1 was a different reptile altogether, one that lived in the wide, deep sea. These two other references to leviathan may have described a swimming reptile like a plesiosaur or a mosasaur. The word translated “leviathan” could refer to multiple large reptiles, similar to our words dragon, reptile, and dinosaur.

So what was the leviathan in Job 41? Whether a Spinosaurus or something similar, it was a real and awesome beast.4 God chose to use this ferocious animal to showcase the might of His creative power. We can be certain that Job was familiar with leviathan and behemoth, and likely had seen them both with his own eyes in the time period shortly after the Flood.

Image credits: Copyright © 2014 D. Bonadonna. Adapted for use in accordance with federalCopyright (fair use doctrine) law. Usage by ICR does not imply endorsement of copyright holder.