A New Creationist Cosmology: In No Time at All Part 2 | The Institute for Creation Research
Skip to main content

Hebrews 11:3 says that “through faith we understand that the worlds were framed by the word of God, so that things which are seen were not made of things which do appear.” In other words, God created the universe with powers and processes of which man knows so little. What we see around us gives us clues, but the mysteries of how God created everything—apart from what He has revealed in His Word—remain just that: mysteries. As Drs. Vardiman and Humphreys demonstrate in their series of articles on cosmological issues, there is much to consider when examining the scientific data, and much which remains in the form of speculative models. ICR appreciates their contribution to the ongoing discussion.

The November 2010 issue of Acts & Facts presented Dr. Russell Humphreys’ solution to the question of how stars can be seen many millions of light years away if only a few thousand years of time have passed since they were created.1 We introduced his cosmology and a discussion of the likely events on the first two days of creation. Here we continue our discussion.

The Second Day of Creation 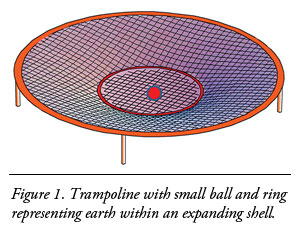 The gravitational effect of the shell of waters above the raqia expanding on the second day of creation can be simulated on the trampoline discussed in part 1 of this series. Remove the heavy metal ball we introduced and replace it with a pebble (representing the small ball of water that is the future earth) within a ring of metal having the same weight as the metal ball. Now there is a nearly-flat area within the ring except for a small dent made by the pebble at the center.

Now, let the metal ring become larger in diameter, but thinner, so that its weight stays the same. The nearly-flat area is larger, but it is also shallower. The depth of the dent caused by the ring is less than before because the ring’s weight is spread over a larger region. Thus, as God expanded the waters above the raqia, the dent in the fabric of space became shallower. This had important relativistic effects on time and space.

God called the raqia “heaven” (Genesis 1:8). At this point, the only created matter within the shell of waters above the heavens was an earth-sized ball of water. According to clues from physics, the expansion of the shell and the raqia is still happening today.2 Perhaps it was because of this unfinished state of the raqia that God did not call His creation “good” at the end of the second day, something He said at the end of each of the other five days of creation.

The Remaining Days of Creation

On the third day, God formed the waters below the firmament into the seas and dry land of planet earth, and then He made plants on the dry land. The only light source was apparently God Himself, as Psalm 104:2 suggests: “Who coverest thyself with light as with a garment.” Note that He said “light,” not “sunlight.” Contrary to the impression some people have, God’s definition of “day” in Genesis 1:5 does not require that the light source be the sun. So throughout the third day, the firmament was devoid of sun, moon, planets,3 and stars.

The new metric (solution of Einstein’s gravity equations) Humphreys developed to describe the relationship among mass, space, and time says that the distribution of mass controls the fabric of space, the fabric of space controls the speed of light, and the speed of light controls time.4 Time is speeded up or slowed down throughout space according to the distribution of mass. Figure 2 shows the relative speed of clocks as a function of gravitational potential energy and distance from the center of the cosmos where the initial mass was created. Notice that potential energy is always negative except at an infinite distance from the center of the cosmos. Also, notice that time slows down at lower potential energy until a critical value is reached. This value called the critical depth is the level below which time itself stops. This condition without time is called the achronous (no time) region. 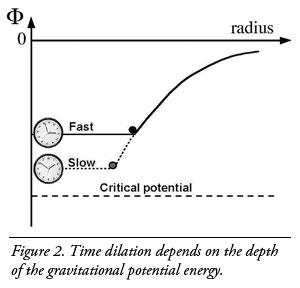 Consider the trampoline in Figure 1 again. At the end of the third day, the pebble (the earth, too tiny to be seen on this scale) and the nearly-flat part of the fabric inside the red ring were just above the critical depth. Imagine that events prior to Day Four have expanded space and moved the shell of “waters above the heavens” out to a radius of, say, one billion light years.5 This would have left the earth and the nearly-flat fabric of space within the ring just above the critical potential.

Now imagine that during the fourth day, God created star masses in a way that would form a linearly-dented perturbation in the otherwise flat potential of the fabric of space, as shown in Figure 3. There appear to be several ways to make such a shape. The linear shape shown here is not essential. It only makes illustrating the processes simpler. 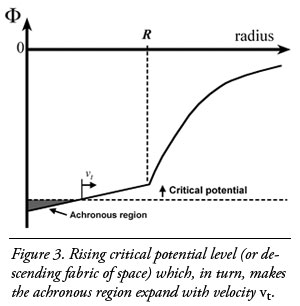 Let’s suppose the tension in the fabric of space suddenly decreased enough to make the critical potential move upward rapidly. Then, the sphere of timelessness would have expanded faster than otherwise. The speed vt of its expansion (or later, contraction) depended on three factors: the inverse of the radial slope of the potential for the fabric of space, the rate of the potential’s descent or rise, and the rate of rise or descent of the critical potential level. Other scenarios are possible, so the reader should take this as only an example of the possibilities that achronicity opens up.

Suppose when the wave of new creation stopped, say at the location of the waters above, represented by the ring, God now increased the tension and the critical potential line moved downward. As it did so, the radius of the sphere of timelessness decreased. Again, let’s imagine that God set the values of the three factors to give a contraction speed at the speed of light, but this time inward instead of outward. As each galaxy emerged from the receding timeless region, 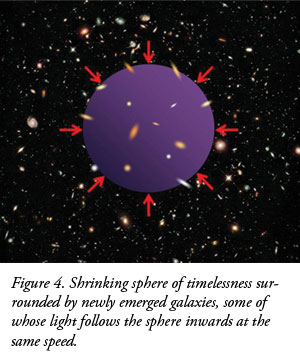 it resumed emitting light. Some of the emitted light would have gone inward toward the center. Because the timeless sphere was moving inward at the speed of light, the inbound light would follow right behind the sphere as it shrank (see Figure 4). When the sphere of timelessness reached zero radius and disappeared, the earth emerged, and immediately the light that had been following the sphere reached earth, even light that started billions of light years away. The stretching of the fabric of space had been occurring continuously all along the light trajectory, thus red-shifting the light wavelengths.

On earth, it was still only the fourth day. An observer on the night side of the earth would have seen a black sky one instant, and a sky filled with stars the next. With a telescope he would also be able to see distant galaxies with suitably red-shifted spectra. From Day Four until now, about 6,000 years later, an observer on earth would have been able to see stars billions of light years away.

Although we have presented the basics of Humphreys’ new cosmology in these first two articles, it has been in an abbreviated form without equations and elaborate illustrations. In a third article, we will conclude this discussion by describing the implications of Humphreys’ cosmology in more detail using a composite figure to illustrate the effects of stretching the heavens on earth time, cosmic time, and location in space. We will also discuss a possible second time-dilation episode associated with the Genesis Flood and some cosmic evidence for the Humphreys model.