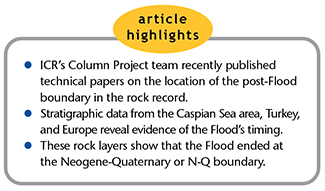 ICR’s Column Project team recently published two papers supporting a high Flood/post-Flood boundary. Both articles are a result of ICR’s ongoing investigation of the stratigraphic columns of the world. The first article details our research in the area around the South Caspian Sea.1 The second article takes a closer look at the sedimentary rocks of Europe and the area surrounding the nation of Turkey.2

Determining where the Flood ended in the rock record is of great importance in developing a Flood model. The location of this boundary has been debated for decades. The two most commonly proposed locations are either high in the Cenozoic, now called the N-Q, or lower in the rock record at the bottom of the Cenozoic, commonly referred to as the K-Pg boundary. We think our investigations have finally resolved the issue.

Our research concentrated on the strata surrounding Turkey, the presumed landing site of the Ark. The first paper details our findings east of Turkey beneath the southern Caspian Sea.1 Here, we found about 17 km (10.5 mi) of Tertiary (Paleogene and Neogene) strata covering an area over 300 miles wide. This is one of the thickest deposits of Tertiary sediment in the world, and all of it was deposited on top of Cretaceous and older rocks. 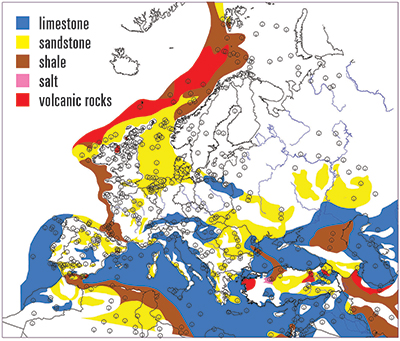 Map of the basal rock type in the Tejas Megasequence (Paleogene and Neogene) for Europe, North Africa, Turkey, and portions of the Middle East.

In addition, at least the lower half of this massive Tertiary deposit is composed of strata laden with marine algae. The algae is considered the organic source material for many of the oil fields in the South Caspian Basin.1 This finding demonstrates that uninterrupted marine deposition continued from the Cretaceous level up through much of the Upper Neogene (Upper Cenozoic). We concluded that the Flood could not have been over in this area until late in the Cenozoic, after these marine strata were deposited.

Our second paper examines the strata across Europe and Turkey. Again, we found uninterrupted marine strata such as limestone, rock salt, and glauconitic sands (indicative of ocean deposits) above the K-Pg boundary, extending from Central Europe to the Middle East and entirely surrounding modern-day Turkey.2 These findings led us to conclude the Flood/post-Flood boundary must be above the level of these marine layers.

These results demonstrate that the vast majority of Cenozoic strata were not post-Flood but instead represent the Flood’s receding phase. Massive marine deposits across vast areas of the world, and especially around Turkey, indicate Flood processes were still active well into the Upper Cenozoic. It would have been impossible for the rescued humans and animals to get off the Ark if the land was still flooded.

Any scientific debate must be measured by the strength of the data supporting each viewpoint. The overwhelming strength of the global rock record needs to be included and acknowledged in any assessment of the Flood/post-Flood boundary location. The rocks clearly reveal that the Flood ended at the N-Q.