ICR recently received a letter asking a common creation question. Genesis 1 describes the creation of all things in six days. Since Genesis says God didn’t create the sun until Day 4, that means the first three days had no sun. Can we consider them real days without the sun shining and providing daylight?

Some Bible readers try to solve this issue by asserting that Genesis 1 doesn’t describe creation but instead represents a poetic expression of God’s greatness. But if God did not create all things by the power of His command like Genesis, Psalm 33:9, Colossians 1:16, and Revelation 4:11 say He did, then He wouldn’t be that great after all. Plus, how great would God be if He couldn’t clearly explain the basics of beginnings in the opening verses of Scripture? 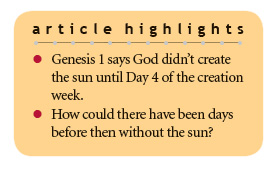 Genesis 1 has a literary structure that aids memorization and shows God’s progressive creation work, but you won’t find attributes of Hebrew poetry like parallelism there. The poetry answer to the sun question creates more problems than it solves, leaving us with three sunless days.

The letter we received mentioned another possible solution. Perhaps God made the sun on Day 1 but waited until Day 4 to give it the purpose to “be for days and years.”1 Genesis 1:16 says, “God made two great lights: the greater light to rule the day, and the lesser light to rule the night. He made the stars also.” This teaches that God made the sun, moon, and stars on the same day He had them fulfill their purposes.2 Unless we flat-out deny verses 16 and 17, we again have three sunless days.

Thorough Bible study asks if Scripture supplies its own definitions. The sun marks today’s days, but does that mean the sun is required for any and all “days”? Scripture says:

Then God said, “Let there be light”; and there was light. And God saw the light, that it was good; and God divided the light from the darkness. God called the light Day, and the darkness He called Night. So the evening and the morning were the first day.3

Genesis thus does not require sunlight for a day to occur. A day just needs a light source that lasts from morning to evening. Earth’s rotation surely caused evening and morning, but the text doesn’t say what supplied light for Days 1 to 3. If that light source was the sun, wouldn’t God just say that instead of telling us He made light first, then made the sun three days later?

Genesis thus does not require sunlight for a day to occur. A day just needs a light source that lasts from morning to evening.

Perhaps God Himself shone forth on the first three creation days—His very glory. After all, “the Spirit of God was hovering over the face of the waters.”4 Or maybe God had some shining matter balled up for three days, then He organized that into the sun and stars. Either option fits the text, but we may never know for sure what or Who shone on Earth for its first three days. Whatever we think, we should never let our desire to identify this light source alter what God plainly said. He may not have wanted us to know what light shone on those first three days, but He did want each Bible reader to know that three days elapsed before the sun began “to rule the day.”