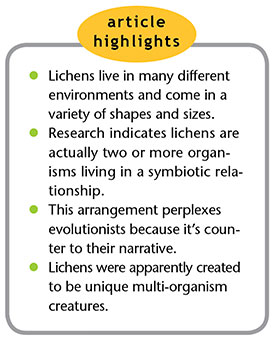 Lichens resemble plants or fungi, with elaborate branches like ocean coral, tiny cup-like structures, or leaf-like fronds. They can be found growing in forests, deserts, arctic tundra, or even in your backyard on rocks or walls. And contrary to hundreds of years of overly simplistic speculation as to what lichens might be, scientists are surprised to find they’re actually complex multi-creature systems consisting of up to four different organisms.1-2

Because of their appearance, many biologists originally thought lichens were either plants or fungi. Interestingly, about a decade after Charles Darwin published his ideas on evolution a Swiss botanist named Simon Schwendener suggested lichens were composite organisms consisting of both fungi and algae.3 However, the evolutionary view that organisms are like individual gladiators fighting each other for survival stifled views like Schwendener’s. But even his idea was tainted since he claimed the fungus was enslaving the hapless algae for its own selfish ends. 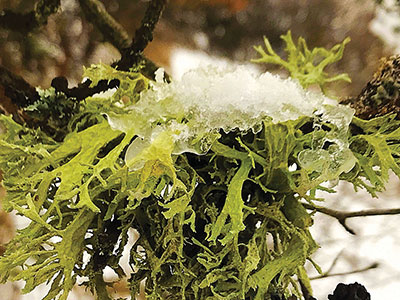 Despite the errant views of Darwinists, we’ve come to realize that mutually beneficial creature systems widely pervade nature among both plants and animals. Scientists call this relationship symbiosis, in which organisms that are purposefully designed to interface contribute food, resources, or shelter to each other. In the ocean, corals depend on algae for food in their tissues. Plants are able to thrive thanks to fungi and bacteria interacting with their roots. And humans and other creatures depend on intestinal bacteria to process food.

While many creatures would get very ill and likely even die if it weren’t for their microbial helpers, they are still separate, distinct entities and would generally appear the same without their symbionts. The creatures that compose lichens look very different on their own, but when they come together they form an entirely unique organism.

The first tripartite composite lichen consisting of a fungus, an alga, and a yeast was discovered in 2016. It was quite a shock to the Darwin-minded community.4 Evolutionists had been having a hard enough time accounting for the amazing design of lichens in which just two organisms join. A prominent biologist from the University of Oxford stated, “The findings overthrow the two-organism paradigm.”3 And if this complexity weren’t befuddling enough, a very common variety called wolf lichen has been found to consist of four different organisms combined into one entity.2

These composite organisms are especially hard for scientists to understand because they are so different from those they’ve been familiar with. Unlike plants and animals, lichens don’t grow from embryos. They instead develop through the integration of separate organisms. Different combinations create wildly varying lichen structures and forms. And different trait features are as important to the total multi-creature organism as legs, wings, or eyes are to animals. Toby Spribille, a lichen researcher at the University of Alberta, stated, “It’s difficult to say what kinds of configurations are within the realm of the possible.”3

While evolutionists are constantly perplexed by the unimaginable complexity found in nature, creationists rejoice in such discoveries. These amazing adaptive systems composed of multiple distinct creatures are an expression of our omnipotent Creator and the infinite ingenuity manifested in His handiwork.

Adam and the Animals
"And out of the ground the Lord God formed every beast of the field, and every fowl of the air; and brought them unto Adam to see what he would call...
BY: HENRY M. MORRIS, PH.D.

Is Man a "Higher" Animal?
Frequently we see the statement that man is an advanced animal, implying he is higher on the evolutionary tree than the others. Let's examine this...
BY: JOHN D. MORRIS, PH.D.
More Environment and Ecology

Orphaned Manatee Rescued in Florida Keys
Necessities can be keys to forming new friendships, an orphaned baby manatee learned earlier this month.1 Maybe there is also a lesson for us...
BY: JAMES J. S. JOHNSON, J.D., TH.D.
More Impact