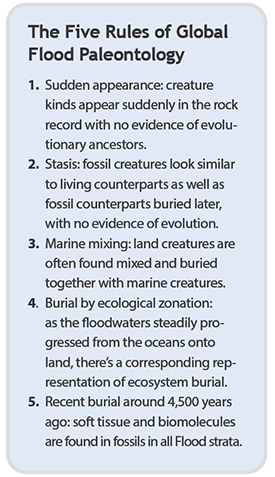 Most people assume that both geological and fossil evidence support the story of evolution. Geology textbooks portray the formation of canyons, mountains, oil deposits, and other features as representing millions of years. And charts and diagrams line up fossils that supposedly show seamless transitions between life forms that branch from a “simple” initial ancestor to the complex diversity we find today.

But what does the evidence actually show? When you look closely at the rock record, you’ll see that five rules of global Flood paleontology explain both the fossil evidence and also the overall succession of global megasequences that were deposited by the Genesis Flood. No evidence for deep time is found in the rock column, and fossils show the order of burial in the Flood year.

Synopsis of the Global Flood

The ICR Column Project team, led by geologist Dr. Tim Clarey, has mapped out the rock record of the global Flood across the world’s continents using extensive data from petroleum industry wells, rock outcrops, seismic data, and published cross-sections.1 ICR scientists have input detailed sedimentary rock data along with megasequence boundaries across every region, including the continental shelf. These data confirm the reality of a global geologic column created by the action of the global Flood. This monumental and unprecedented project has shown that the global Flood is represented by the same sedimentary rock-record trends on every continent that’s been evaluated.

Not only does the overall stratigraphic sequence of the Flood record correspond globally, but the data also show that the Flood occurred in a series of progressive inundations corresponding to each megasequence. These inundations were caused by violent tsunami-like waves over the yearlong period of the Genesis Flood.1 These progressive ebb-and-flow events began their sediment and fossil deposition in the lowest regions of the continental shelf (shallow seafloors near land), proceeded to the edges of landmasses (lowland coastal regions), and then moved progressively upward onto land until finally the entire global landscape was under water.

During this violent global catastrophic process, aided by rapid tectonic plate movement, the original pre-Flood mega-continent split apart into the global configuration of the various continents we see today.1 Then in the latter stage of the Flood, the newly separated continents experienced continental and mountain range uplift, and the floodwaters receded. This final stage of the Flood was characterized by vast amounts of water and sediment draining across and pouring off the continents. Much of this sediment deposition took place especially in large basins on land next to mountain ranges and offshore in the oceans.

The Importance of Integrating the Fossil Record

Now that an accurate geological model of the global Flood has been developed, it’s important to begin integrating the fossil record with the stratigraphic data. After all, the thousands of meters of Flood sediments across the globe contain vast amounts of fossils buried within them as a further testament to the Genesis Flood record. But do these vast layers of fossil-laden sediments confirm the story that geology has revealed?

Indeed, they do fully corroborate the Flood’s rock record, and they also tell us much more about the nature of the Flood’s processes. For many years creationists have rightly acknowledged that the fossils bear record of the global Flood. In other words, why are trillions of dead plants and animals buried all over the earth? Localized catastrophes certainly do not provide a satisfying answer.

And even worse for those who ignore the truth of Scripture, there’s virtually no evidence of evolution in the fossils. The huge diversity of plants and animals all appear suddenly with no signs of transitional forms (discussed further below). Even the renowned Harvard paleontologist Stephen Jay Gould candidly admitted this inconvenient but obvious truth.

The extreme rarity of transitional forms in the fossil record persists as the trade secret of paleontology. The evolutionary trees that adorn our textbooks have data only at the tips and nodes of their branches; the rest is inference, however reasonable, not the evidence of fossils.2 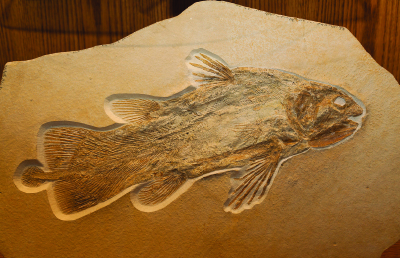 Creationists have also noted that various kinds of creatures not only appear suddenly in the rock record but look nearly identical to their living representatives after supposed millions of years of time.3-14 Paleontologists call this lack of evolutionary change “stasis.”

But is sudden appearance and stasis the end of the story when it comes to applying the fossil data as proof of a global flood? Clearly, it isn’t, and now that an accurate global sedimentation model for the Flood has taken shape, we need to add the paleontological data as well. This will help answer the questions of why we often find land creatures mixed with marine creatures, and why we find distinctive types of fossils that correspond to the various strata in the geologic column.

From the Cambrian rock layers near the bottom of the geologic column, where complex life first appears, to the uppermost section of Flood sediments in the Cenozoic, we see many types of fossil creatures and plants appearing suddenly with no previous evolutionary ancestors. In fact, the sudden explosion of marine animals in mind-boggling diversity in the Cambrian is one of evolution’s greatest conundrums.3

Not only does this initial explosion negate evolution, many Cambrian creatures are still with us today and look highly similar to their alleged 400 million-year-old-plus ancestors. Starfish, brittle stars, and horseshoe crabs are stellar examples of not only sudden appearance but stasis. This same evolution-negating fossil trend can be observed at every stratigraphic level of the geologic column.3-14 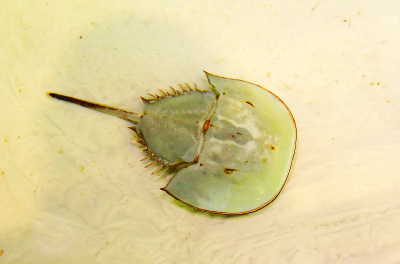 The Flood was a marine event with massive successive tsunami-like waves generated by tectonic plate motion that progressively pushed the ocean’s water up onto land. Thus, we would expect the constant mixing of marine life with land creatures in the fossil sediments. In fact, that’s exactly what we see in the paleontological record beginning with the Carboniferous strata, when the floodwaters first began inundating land.8

In the Carboniferous, we see huge levels of marine life (fish and shellfish) mixed with land plants, insects, and lizards. This same trend continues upward in the geologic column at every level.9-14 For example, sharks are found buried with dinosaurs in the Cretaceous, and squirrels, bats, and other mammals are found buried with rays and herring in the Lower Cenozoic. 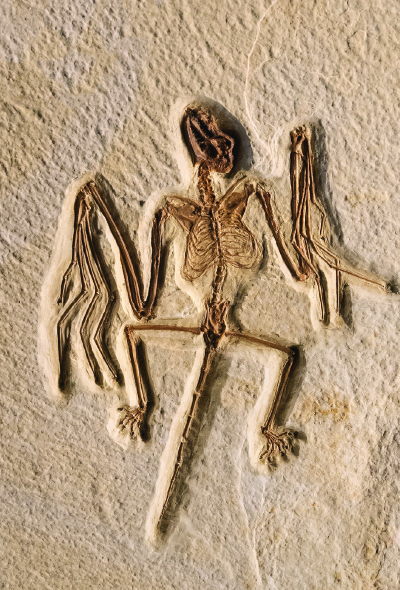 The progressive global cataclysm initially buried marine life, as found in the earliest Flood layers known as the Cambrian, Ordovician, Silurian, Devonian, and Lower Carboniferous systems, which correspond to the Sauk, Tippecanoe, and Kaskaskia Megasequences. As the floodwaters began inundating and destroying land, they buried tropical coastal ecosystems, which included a variety of insects, lizard-like creatures, and immense amounts of lush coastal vegetation that formed the first massive coal seams in the geologic column. This first cataclysmic pulse onto land is represented by the Late Carboniferous or first part of the Absaroka Megaseqeunce.

Then as the floodwaters continued, we see the progressive burial of other inland ecosystems in successively higher and more temperate environments until the high-water mark of the Flood was reached near the end of the Cretaceous system (Zuni Megasequence). The final burial phase of inland plants and animals culminated with the massive Flood runoff that occurred as the mountains and continents were uplifted at the end of the Flood, creating most of the Cenozoic layers and massive basin deposits (Tejas Megasequence).

Another key aspect of the entire sedimentary rock record is the overwhelming evidence that it was laid down recently, about 4,500 years ago in the yearlong global Flood. This biblical date for the Flood, determined by genealogies and chronologies, fits perfectly with the rock record evidence. The recent date is proven by the fact that every layer of the sedimentary rock record from the Cambrian to the Pliocene (Late Cenozoic) contains fossils with soft tissue and/or sensitive biomolecules that shouldn’t be present if they are millions of years old as claimed by evolutionists.3-14

In summary, the five rules of global Flood paleontology explain the fossil evidence of the rock record and also fit closely with the overall succession of global megasequence deposition by the Flood. These rules are 1) Sudden appearance: creature kinds appear suddenly in the rock record with no evidence of evolutionary ancestors; 2) Stasis: fossil creatures look similar to living counterparts as well as fossil counterparts buried later, with no evidence of evolution; 3) Marine mixing: land creatures are often found mixed and buried together with marine creatures; 4) Burial by ecological zonation: as the floodwaters steadily progressed from the oceans onto land, there’s a corresponding representation of ecosystem burial; and 5) Recent burial around 4,500 years ago: soft tissue and biomolecules are found in fossils in all Flood strata.

The Genesis record is accurate.