One of the greatest problems for evolutionists is the sudden appearance of complex animal life with no evolutionary precursors, as seen in the Cambrian Explosion.1 But equally problematic is how complex creatures with backbones (vertebrates) could have possibly evolved. For all practical purposes, no transitional form has been found that links invertebrates like soft-bodied creatures and arthropods (creatures with a hard exoskeleton) to vertebrates. This glaring gap in the fossil record is just one more example highlighting the lack of evidence for molecules-to-man evolutionary theory.

Vertebrates include fishes, amphibians, reptiles, birds, and mammals. Living vertebrates exhibit a huge range in size, from a miniature frog found in Papua New Guinea that is only about a quarter of an inch long to the massive blue whale, which is over 100 feet long. Overall, vertebrates comprise only about 5% of all known animal species. The rest of animal life is known as invertebrates, which have no vertebral columns (backbones).

The problem with identifying a proto-vertebrate ancestor is that vertebrate fish-like creatures appear in the lowest levels of the Cambrian strata, the sedimentary rock layers where complex forms of animals make their first appearances. In other words, there is no time or space for evolution to occur since vertebrates show up fully formed at the beginning of the fossiliferous rock record sequence.

According to the grand evolutionary story, the first proto-vertebrate was a sea squirt,2 a sea creature that is still alive today. While sea squirts are common ocean creatures, their presence in the fossil record has been difficult to determine because they are soft-bodied and don’t fossilize easily. Even so, paleontologists think they have found evidence of them at the base of the Cambrian rock layers (or slightly before), which would place them smack dab in the Cambrian Explosion where so many complex forms of animal life first appeared suddenly with no evolutionary precursors.1 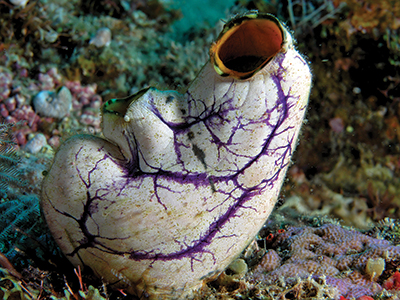 Technically, sea squirts are called tunicates, and they represent a marine invertebrate that is part of the phylum Chordata, a group of creatures that includes all animals with dorsal nerve cords or notochords. Vertebrates are a sub-group of the chordates. The adult form of the sea squirt is a stationary bag-shaped creature (Figure 1) that typically attaches to ocean rocks around the world. It often has translucent skin and two siphons (or openings) at its top for interfacing with the ocean water to acquire food and resources.

The main reason evolutionists like to imagine the sea squirt as a vertebrate ancestor is that its larval stage comprises a free-swimming creature that has a mouth, a nerve cord, and a tail.2 The larva attaches itself to a rock and then undergoes an extraordinary metamorphosis into the radically different structure of the stationary adult animal. The entire developmental process of this creature in all its complexity is exquisitely programmed by the innate genetic blueprint and cellular systems the Creator engineered into it. There is absolutely no evidence at any level that the chordate-containing larval stage of this creature decided to break free from its internal programming and somehow evolve into a fish. An evolutionary transition of that magnitude would require an extensive amount of new genetic information and many novel innate cellular features.

The hemichordate, another creature typically lumped into the first evolutionary branch with sea squirts, is entirely unrelated to either sea squirts or fish.2,3 The acorn worm, a creature also still living today in our world’s oceans, is a hemichordate. The reason acorn worms are lumped into the base of the vertebrate evolutionary tree is because they have a section of their foregut called a stomochord that was previously thought to be related to the notochord of the chordates. However, evolutionists now claim that it evolved independently from chordates and call it an example of convergent evolution rather than a homology. A hollow neural tube does exist among some species early in their development, but this is thought to be an evolutionary enigma. Given this inability to determine any consensus evolutionary relationship, renowned vertebrate evolutionist Michael Benton admits, “The phylogeny of hemichordates is actively debated.”2

Next in the evolutionary chain are the lancelets, also known as amphioxi (singular amphioxus), a group of about 30 species of jawless filter-feeding fish that forage for food near the ocean floor (Figure 2). They are considered the closest evolutionary link between sea squirts and so-called primitive fish. And, like sea squirts, they are alive and well in the world today even though they are considered the early basal evolutionary ancestor of vertebrates.

In the fossil record, lancelets appear suddenly in the lower Cambrian strata at roughly the same time as many other creatures with complex body plans. This initial explosion of life is often known as the “main burst” of the Cambrian Explosion and occurred about 530 million years ago according to evolutionary dating. The oldest fossil lancelets are known as Haikouella lanceolata and include about 305 fossil specimens found in the Cambrian rocks of Haikou near Kunming, China.4 Fossil Haikouella have basic features of a vertebrate fish, including a fully developed fish-like heart with arteries, gill filaments, a caudal fin for fish-like locomotion, a neural cord with a sizeable large brain, and a head with eyes.5

Just above the amphioxus (lancelet) in the theoretical early vertebrate evolutionary tree is a recently discovered fish called Pikaia.6 This fish looks nearly identical to modern living lancelets and is probably just another type of lancelet. Because it appears in the Cambrian at a slightly higher level, it has been placed above Haikouella in the fictional evolutionary tree.3 However, its placement by evolutionists is uncertain, as noted by Michael Benton, who states, “Determining the phylogenetic position of Pikaia is problematic.”2

Other Fully Formed Fish Appear Suddenly in the Cambrian 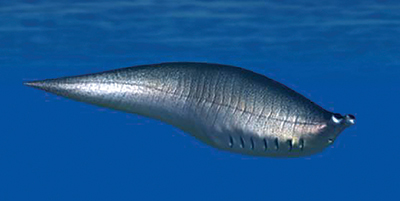 Three other fish with somewhat similar overall body plans to lancelets also appear in the early-to-middle Cambrian and are also believed by evolutionists to be early ancestral vertebrates.2,3 Scientists typically clump these three fish together just one node above Pikaia, representing a supposedly more-evolved fish form in the vertebrate evolutionary tree.3

These three Cambrian fish are Myllokunmingia, another alleged basal vertebrate that appears in the Lower Cambrian Maotianshan shales of China and is claimed to be about 530 Mya (Figure 3); Metaspriggina, found in the Burgess Shale and containing a somewhat similar body plan to other Cambrian fish but with the unusual feature of two well-developed, upward-facing eyes with nostril-like features directly behind them (Figure 4); and Haikouichthys, a fish with a similar body plan to the other Cambrian fish found near Yunnan, China (Figure 5). All three fish are fully developed, complex vertebrate creatures that appear suddenly in the Cambrian Explosion with no evolutionary precursors. They most likely merely represent different created kinds of fish. 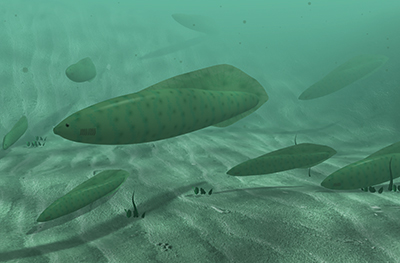 The evolutionary origin of vertebrates is a speculative theory with absolutely no fossil data to support its contentions. Creatures with backbones (fish) appear suddenly in lower Cambrian rock layers. They are found in the midst of the explosive first appearance of other complex marine life.

In all this, no evolutionary precursors are uncovered. Nowhere has anything been found that could be considered a transitional creature between invertebrate and vertebrate. And the sea squirt and the acorn worm are both entirely unique in their own right; they’re not intermediate or transitional in any way. So, not only is there no evidence of vertebrates evolving, but creatures with backbones appear at the very beginning of the fossil record in the Cambrian strata along with a large array of invertebrates in a huge explosion of complex animal life that utterly confounds evolution across the board.1

The main reason we find sea squirts, acorn worms, and various types of fish in these early Cambrian rock layers is that they were creatures dwelling on or near the ocean bottom, so they were the first to be buried in the global Flood. ICR geologist Tim Clarey has documented that the Cambrian Flood strata correspond to the Sauk Megasequence and represent the initial sedimentary deposits of the Flood.7 This initial phase buried many different types of marine creatures living in shallow seas—exactly what would be expected in a model of progressive burial by ecological zonation and increasing water levels during the global Flood.

When it comes to vertebrate evolution, the fossils still say no.