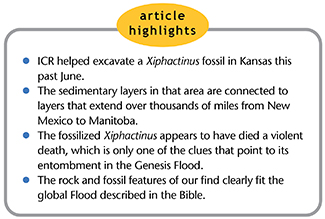 A fossil dig team was just finishing its last day of excavating a two-meter-long extinct fish on a private ranch in Kansas. As dusk began to settle on the prairie’s badlands, two team members traced some vertebrae embedded in the hillside. They quickly scraped off sediment to uncover something even bigger. They just had to come back and excavate this fantastic find!

ICR took the opportunity to assist them with this dig in June 2020. Rock and fossil features that fit the Flood model of Earth’s history became clear through this one-of-a-kind experience. The excavation took place in an outcrop of the Smoky Hill Chalk member of the Niobrara Formation, whose rock layers are famous for fossils of fish, giant clams, and flying reptiles. Each rainy season or even a rainstorm can erode sediments to expose new fossils.

The excavation team’s first step involved clearing a wide space around the vertebrae, looking carefully for fossilized bones. The sediment was soft enough for wooden chisels and brushes to remove it. Soon more bones emerged. By the first afternoon, we’d exposed long bones, skull remnants, one tooth, and some mysterious dark residue. After we’d uncovered over 40 associated bones, we felt sure this was worth the work. 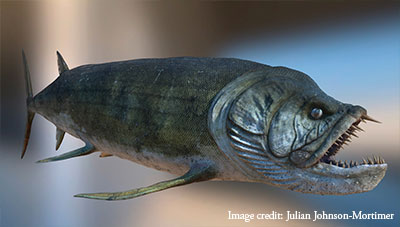 Rocks and Fossils of the Region

The most abundant vertebrate fossil from this region is probably the famous fish named Xiphactinus (zeye-FACT-in-us), which is what we found. Many fossil museums have one mounted in their halls. The rarest specimen includes a swallowed fish inside an enormous Xiphactinus rib cage. Xiphactinus looked like a tough fish with its big, toothy mouth.

Flying reptiles were buried among these fish, along with clams, sharks, mosasaurs, plesiosaurs, turtles, birds, and a few dinosaurs.1 Few (if any) creatures that lived on hard ground—like camels, dogs, or deer—died in the carbonate muds that would become the Niobrara Chalk. Wetlands creatures landed here, like those in other rock layers with similar age assignments and fossils.2 Where on Earth today do sea, swamp, and sky creatures get fossilized together in mud? Nowhere. These rocks and their fossils demand a broad-reaching watery catastrophe. 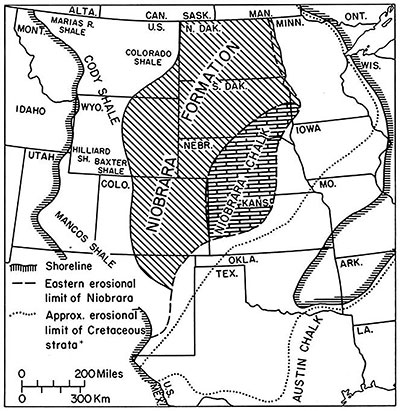 But how broad? Figure 1 reproduces a 1982 map by Donald Hattin of the Kansas Geological Survey that shows the extent of the Niobrara Formation in the United States. But members of this same rock system extend beyond this map from the Gulf of Mexico to Arctic Canada. Outcrops contiguous with the Niobrara take various names in different areas, including Mesa Verde Formation in southern New Mexico, Niobrara Shale Member in northern New Mexico, Mancos Shale in Colorado, First White Specks in Montana and Canada, and again Niobrara Formation in Manitoba. Something deposited all this layered sediment at the same time. Noah’s Flood comes to mind.

Many outcrops of the Smoky Hill Chalk show its characteristic gray-colored layers below light tan layers. The gray rocks have thinner layers than the tan rocks above them. Where on Earth today do the same coloring and layering patterns get deposited across thousands of square miles? Nowhere.

The layers immediately above and below our Xiphactinus fossil varied from about one to four centimeters thick. Where today do muds get deposited in layers that stay undisturbed until the mud hardens into rock? It happens at sites of catastrophe. For example, mudflows at Mount St. Helens in the early 1980s deposited layers that are still visible today. Similarly, high-energy marine shelf gravity flows deposit layers with sorted grain sizes, just like those seen in shale rocks on land.3 Smaller storms may deposit layers in streambeds or river deltas, but animals disturb these surface layers within just a few months. No creatures disturbed the Niobrara’s layers. This suggests a very widespread watery catastrophe. 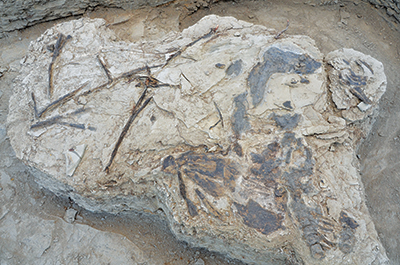 Where did all the mud come from that ended up spread across the west in the Niobrara chalks and shales? Geologist Donald Hattin wrote, “The Niobrara Chalk of Kansas represents deposition of carbonate-dominated muds far from the major, western sources.”4 Plenty of fast-moving water must have carried the many grains a long way. Today’s rivers can carry sediment for miles, but they deposit those grains in narrow riverbanks or fan-shaped deltas where river meets sea. In contrast, the Niobrara Formation is many times larger than the world’s largest river deltas. Where is the familiar fan-shape of river deltas? Figure 1 shows no such thing. Clearly, some unusually immense process deposited the Niobrara. The Flood of Noah fills the bill.

Figure 2 shows the upper surfaces of 48 bones exposed during our excavation. At first, we hoped it might be a Pteranodon, but fossil prep back at the lab revealed more bones beneath these 48. By carefully removing matrix from around the topmost bones using a dental pick, a preparator revealed a big Xiphactinus maxilla (jawbone) with teeth, shown in Figure 3. 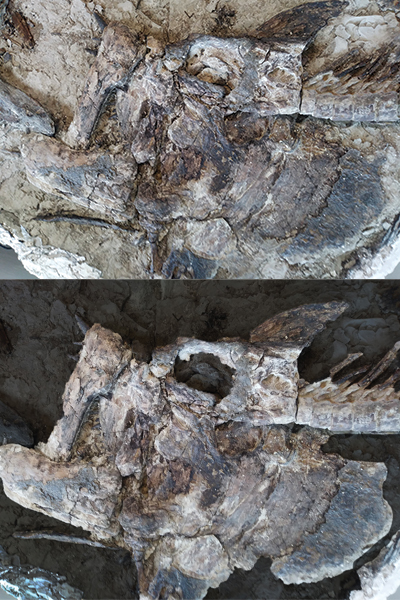 Figure 3.The enhanced outline of bones including the maxilla and its teeth uncovered in the lab shows a fish fossil
Image credit: Scott Arledge

Some of the fossil’s vertebrae remained aligned, but a few were displaced and some were squished. Long bones emerged during excavation from the left but not the right side of the main body. All the bones lie in a single layer approximately three centimeters thick. In life, this fish had an operculum bone that covered its gills. Our fish’s operculum had been shoved about 40 centimeters away from its head. Overall, it looks like forces folded, flattened, and flung apart this Xiphactinus. It did not die a peaceful death.

The tortured state of its remains contrasts with secular imaginary fossilization scenes of placid fish that sank to the bottom of some ancient calm sea. In which of today’s seafloors do fish or bird remains get fossilized? None. They get eaten with haste. Why didn’t these creatures fall prey to scavengers? Rapid entombment in mud explains fossils. Forcibly folded and flung-apart fossils imply the violent waters that the year-long Flood of Noah would have supplied.

Our fossil’s excavators carefully brushed sediment from the upper and side surfaces of the exposed bones. We added polyvinyl acetate (glue) to bones to keep them from crumbling. Distinguishing bone from matrix in person is easy, but these bones can be hard to see in photographs. The glue’s gloss helped set the bones apart for clearer pictures (see Figure 2).

The excavated area took a rounded shape of about 140 × 120 centimeters. We divided this area into four smaller plots, each removed separately. Figure 4 shows the author and the fossil’s discoverer trenching out a smaller plot within the fossil area. The inclusion of much of the matrix surrounding each fossil region plus the added plaster casing combined to make very heavy packages. The largest package included the spine and head. Five men struggled to carry it up the hill to a vehicle some 25 meters away from the dig site. 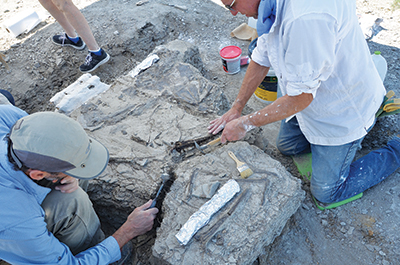 Figure 4.The author (left) and the fossil’s discoverer (right) use patiches (hammer picks) to remove matrix from beneath the fossil.
Image credit: Brian Thomas

One of the team members spotted a shark tooth between, but one thin layer below, the long bones and fish vertebrae. The tooth resembled that of the modern-day dusky shark. Another lemon shark look-alike tooth lay on the ground not far away. Some animals in the fossil record went extinct, but others look the same today. These fossils show no evolution—just extinction or sameness.

Our team also found fish coprolites. These once-soft animal waste fossils now look white, feel chalky, and are about the diameter of an adult human finger. Where do coprolites form today? Nowhere. The preservation of such fragile organic material suggests rapid burial and rapid drying. Left wet, bacteria would have degraded it long before it had a chance to absorb minerals and harden. The year-long Flood of Noah’s day gives a sensible context in which to place these clues. 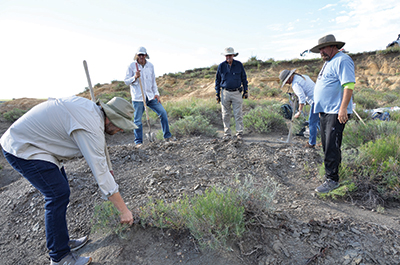 Plenty of shrub roots penetrated the rock layers surrounding the Xiphactinus fossil. Figure 5 shows team members removing shrubs at the dig site. Several roots traveled parallel to the long bones, and rootlets wrapped around various fossil bones more densely than in the surrounding sediment. Plant roots use chemotropism to grow toward nutrient sources. That means the bones still have nutrients in them that these plants seek.

These root associations show that some of the original bone chemistry—and possibly even biochemistry—might remain. If so, then these bones have not lain in the ground long enough to completely decay and dissolve. Nor have they totally turned into rock. In either of those cases, roots would ignore them. The Bible’s timing for the Flood only thousands of years ago would account for still-nutritive, fresh-looking fossils.5

Learning from a Dig Experience

This fossil fish got trapped in mud along with sea creatures like sharks and clams. Gray mud layers fell first, then tan mud soon after, and this pattern stretched across hundreds of miles. No common processes produce such widespread patterns, so an uncommon process must have done it. The extent of the Niobrara matches the Bible’s Flood description: “And the waters prevailed exceedingly on the earth” (Genesis 7:19), and “the world that then existed perished, being flooded with water” (2 Peter 3:6).

Catastrophic flooding explains the thin layering within the Smoky Hill Chalk. Time would have given mud-dwelling creatures the opportunity to churn up such layers, whereas a catastrophe would have buried layers deep enough to avoid those creatures. The Flood’s implied violence explains smashed and separated fish bones. The fact that fossils exist at all speaks to rapid entombment through the Genesis Flood, which took only 150 days to cover the highest pre-Flood lands (Genesis 8:3). Coprolites suggest that this unique watery catastrophe did not linger like a supposed Western Interior Seaway would have.6 Apparently, microbes didn’t have the time or moisture to degrade the fish excrement. It looks as if “the waters subsided” (Genesis 8:1), allowing it to dry.

How long have these Xiphactinus bones been underground? The secular world assigns an evolutionary age of over 85 million years to the Smoky Hill Chalk, but the biblical Flood happened about 4,500 years ago.5 The fact that plant roots still seek nutrients from these bones shows their youth. Each aspect of this splendid fossil and its surroundings confirms the global Genesis Flood.