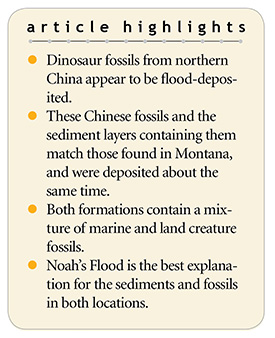 I recently completed an online college course on Cretaceous dinosaurs from China, centering on fossils from the Erlian Formation. These rock layers lie in a big basin near the Mongolian border. Clues from the Erlian reminded me of Cretaceous layers of the western United States. In the end, history from the Bible helped me assemble a history for these rocks that explained more of their features than the history my evolutionary professors purveyed.

The Erlian Basin occupies a surface area of 50,000 square miles. Mountains border its vast, landlocked sediments, and other basins surround those mountains. Its name comes from a nearby town that lies 480 miles from the nearest ocean. My course instructor said that a system of ancient rivers deposited the Erlian Formation’s Cretaceous layers. He referred to the formation as an ecosystem. As the course progressed, however, details emerged that contradicted his teachings.

A recent study of the Erlian Formation noted fast fluid flow features in each sedimentary layer called facies.1 In other words, there aren’t just ancient river channels within a layer, but the entire layer holds signs of fast flow. The sand-dominated facies have cross-beds typical of swift waters.2 The facies with a mixture of sand, silt, and mud have “cross strata…formed by oscillation processes marking the ultimate stage of the waning flood.” The study authors don’t say what flood it might have been, but they know the mud facies “were deposited in floodplain ponds.”1 Does widespread flooding describe any normal ecosystem? 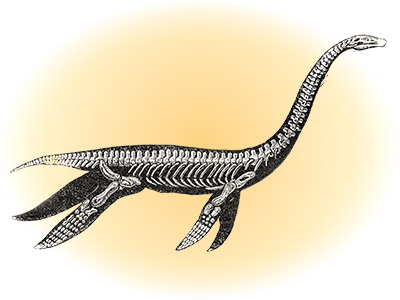 The Erlian Formation’s strange fossils also indicate catastrophe. Along with Gigantoraptor (a large, toothless theropod), Erlianosaurus (a plant-eating theropod with huge hands), and Sonidosaurus (a small titanosaur), the Erlian has fossils of crocodiles, plesiosaurs, softshell turtles, sharks, other types of fish, rays, and clams. This odd mixture of wetland and sea creatures calls for an odd origin. Instead, evolutionary scientists insist the fossils preserve a normal ecosystem. No normal ecosystem forms fossils, let alone environment mix-ups like these!

Until we see sharks, skates, and fish swim on dry land, we should remain skeptical that dinosaur rock layers represent ancient ecosystems. Rather, a powerful, watery event must have jumbled these creatures together, mixed them with mud, and dropped them in big inland basins. This event happened in both Montana and Mongolia.

A global watery effect should have a global watery cause, so I turned to my Bible. The Flood account in Genesis 6–9 describes a worldwide watery catastrophe that other Bible contributors either directly or indirectly confirmed.5

The Flood account in Genesis 6–9 describes a worldwide watery catastrophe that other Bible contributors either directly or indirectly confirmed.

Chinese rock layers do not showcase some age of dinosaurs from long before Adam and Eve. Instead, like so many other Cretaceous rock layers around the world that mix land and sea creatures, they formed from the Flood.

* Dr. Thomas is Science Writer at the Institute for Creation Research and earned his Ph.D. in paleobiochemistry from the University of Liverpool..