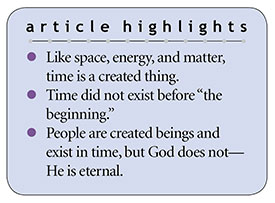 Questions about time often arise in discussions of Genesis and Earth’s age. Could billions of years have elapsed before the “in the beginning” of Genesis 1? When did time start? Science and Scripture suggest some answers.

As one of the seven fundamental quantities of physics, time is essential to our existence.1 It sets “the stage on which reality plays out.”2 It permits possibilities to become real and allows causes to produce effects. Over time, we observe matter change state or form. People grow, learn, and get to know one another and God. Because of time, we humans get the privilege of experiencing the present, remembering the past, and hoping for the future.

We can define time as duration characterized by changes in what something is or has. For example, an ant can pick up a bit of leaf and thus change what it has. After it dies, its nature changes over time from that of an ant to that of essentially dirt.

Time and change go hand in hand. But God does not change.

Time could not exist without God, yet He does not need time. Humans require time to exist. My potential to be a different me becomes the actual me only through time. Over time, we change what we have, such as gaining knowledge or strength. And God can change what we are, like from a sinner to a saint.4

These descriptions help address the question of how time began. “For by Him all things were created that are in heaven and that are on earth, visible and invisible.”5 Time may not be visible, but its effects are. Time is tightly tied to changing states of visible and invisible entities. Without time for the ant to decay, its essence would not change. Without time for a girl to learn the gospel, she would not have the opportunity to repent of her sin and trust Christ. Thus, time, space, and matter either all exist together or none exist.

Genesis 1:1 says, “In the beginning God created the heavens and the earth.” Clearly, no created entities existed before that moment. And without material or immaterial entities, how could anyone notice the passage of time? So, it looks like “the beginning” marked the first moment of time.

One could make a similar argument about space. Without space for material like clocks to inhabit, then no clocks could exist to mark the passage of time. And God did not create space (“the heavens”) until Genesis 1:1.

Another argument suggests the same conclusion. One of God’s first acts of creation was to invent a giant device to mark time—a spinning earth near a light source that delineated evening and morning. Hebrews 11:3 says, “The things which are seen were not made of things which are visible.” Scripture doesn’t record any things or events prior to the beginning, and time is defined by changes in the state of things. Apparently, prior to the creation week, there was only God, perfect in His timeless changelessness—just as He still is and will forever remain.6 Thus, the Bible suggests there was no time before the beginning of creation.

God, Eternity, Genesis, and Me

I find it hard to comprehend God’s eternal state. It helps me to note the difference between eternity and endless time. Endless time would involve the same kind of time we experience now, just elongated forever into the future. But God does not exist in a state of endless time. He exists in eternity, apart from any timeline. He can pop into the timeline of our reality anytime He wants. He left evidence of having done just that with His many miracles, including the miracle of creating time (“in the beginning”), space (“God made the heavens”) and matter (“and the earth”).

Because it records no time before the beginning’s first moment, Scripture leaves no time for eons of evolution.

Thank God for creating people, things, time, and space in the beginning. He even had His Son Jesus enter time with us and for us because He loves us so much! “But when the fullness of the time had come, God sent forth His Son, born of a woman, born under the law, to redeem those who were under the law, that we might receive the adoption as sons.”8

So, can we avoid recent creation by fiddling with the meaning of time in Genesis 1? Bottom line, we would have a hard time trying to go against the scriptural trend that time began at the moment God first spoke light into being on Day 1 of the creation week.

Did Angels Exist Before the Creation Week?

Some people imagine angels watching God create everything, starting on Day 1. In order for the angels to watch that moment, they would have had to exist beforehand. Either God made them before the beginning or they have always existed. They could not have eternal existence, for then they would not differ from God Himself, who is the only uncreated, eternal being. Since angels are created, finite beings like you and me, they can only exist in time. And the Bible nowhere says angels existed before Day 1.

Could angels have existed in a heavenly time that was ticking before earthly time began? I doubt it. If “the heavens” in Genesis 1:1 include God’s dwelling place as well as the stars’ realm (Genesis 1:15), then it appears angels would have had no place to exist before creation.

The Bible does not specify exactly when God made angels, but it gives clues that narrow the options. God asked Job, “Who laid its [Earth’s] cornerstone, when the morning stars sang together, and all the sons of God shouted for joy?” (Job 38:6-7). The sons of God are angels. God must have made them during the creation week after He made the time that allowed them to change into a state of shouting for joy but before He made the earth over which they rejoiced.