And the LORD God formed man of the dust of the ground, and breathed into his nostrils the breath of life; and man became a living soul. 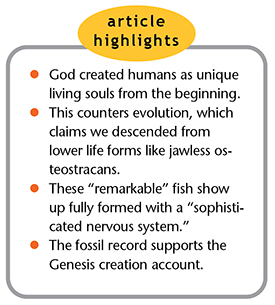 Genesis 2:7 states that man became a “living soul” (Hebrew nephesh chayyâh) when God breathed into him “the breath of life.”1 Therefore, naturalism cannot be true. If it were, then humans would instead have inexplicably acquired some kind of nephesh through a gradual evolutionary descent from our alleged ancestors.

Since Scripture informs us so clearly that life originated with the Creator rather than through random natural processes, we can confidently examine evolutionary claims and find them insufficient to doubt our Creator’s Word. For instance, look at the osteostracans, bizarre fish-like creatures with about 200 species. They have a jawless head covered by a bony shield, the nature of which “is still unclear.”2 Not surprisingly, they suddenly appear in the fossil record as fully developed Osteostraci.

The origin of the Osteostraci is much more mysterious than their disappearance. An investigator who seeks to know the steps by which these forms come into existence finds himself confronting one of the most perplexing problems in the study of vertebrate evolution.3

There is nothing simple about these sophisticated creatures—their morphology (form or appearance) is described as “remarkable,”2 and they have a “sophisticated nervous system.”4 With their secular worldview, however, evolutionists say this creature was the predecessor of humans. A recent article describing the ecological diversity of Osteostraci states no fewer than five times that these aquatic animals were our ancient ancestors5 (as if repetition can turn something into a scientific fact). 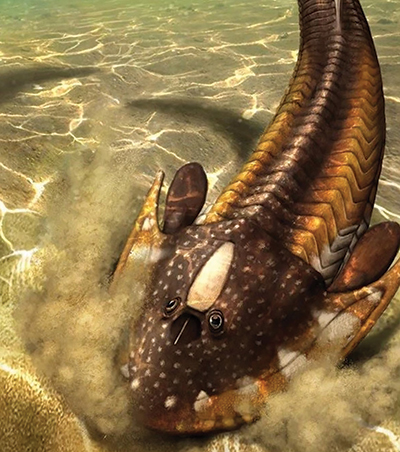 If anything, the article inadvertently supports the creation model. It overturns the classical evolutionary tale of jawed vertebrates “driving their jawless relatives (osteostracans) to extinction.”5 It instead describes—using computer simulations—how osteostracans were designed to interact with currents of water in a remarkable way.

These experiments revealed the bizarre spikes and spines that ornamented the heads of these jawless vertebrates were actually hydrodynamic adaptations, passively generating lift from water currents flowing over the body. The varying head shapes of different species allowed them to adapt to different positions, some high, others low, within the water. Our ancient ancestors were already ecologically diverse, long before the evolution of their jawed vertebrate relatives.5

Creationists maintain that all diversities of jawed and jawless aquatic creatures lived together, occupying different ecological niches. Jawless animals never evolved into a jawed condition. In the face of juxtaposing evidence, secular scientists are required to concede that the theory of such a strange transition “is more complex than previously thought.”5

In addition, Dr. Carlos Martínez-Pérez, a researcher from the University of Valencia in Spain, states:

Like Tiktaalik,6 God designed the osteostracans to move into and fill specific ecological niches: “The different species’ body shapes are adapted to different environments, revealing distinct lifestyles among these groups of jawless early vertebrates.”5

Instead of the osteostracans being “our ancient ancestors,” we can conclude that these fascinating creatures were well-designed by God for a place in the aquatic ecosystem of the pre-Flood world. Human life, as Genesis states, was directly God’s creation.