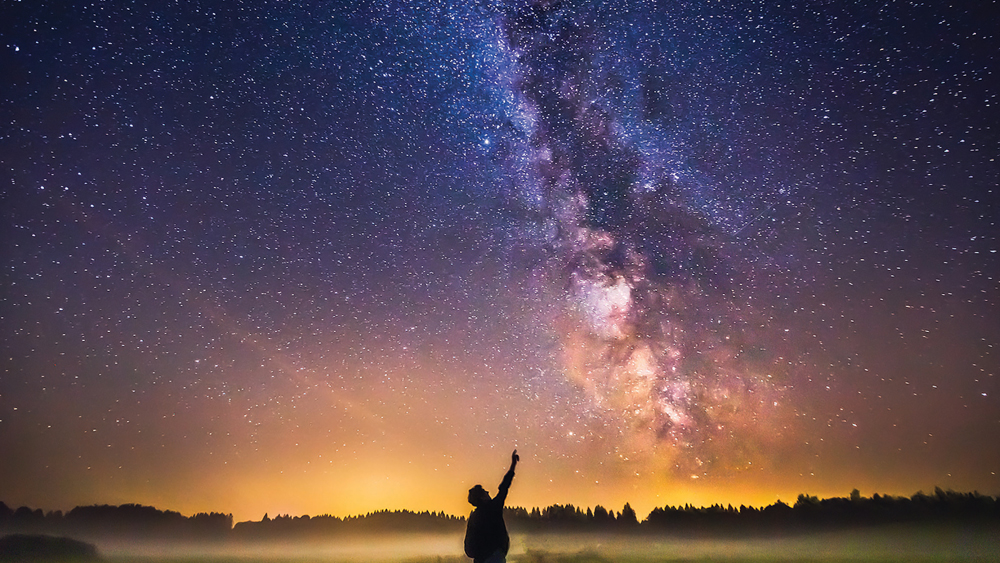 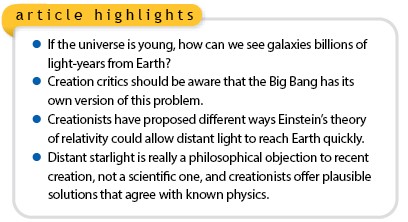 Measuring the Speed of Light 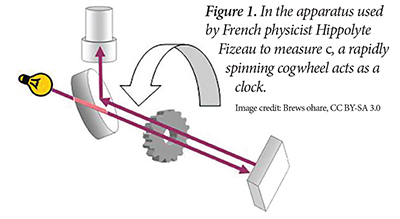 Physicists use the letter c as the symbol for the speed of light. To determine c, very accurate clocks measure the time needed for light to bounce off a mirror and return to its starting point (Figure 1). For a distance of five meters between the light source and mirror, the measured speed is the round-trip distance of 10 meters divided by the total time for the trip. These measurements show that the speed of light, c, is 186,000 miles, or 300,000 kilometers, per second.

The speed of light is rather weird, and this makes the issue more complicated than one might assume. The value of c is always 186,000 miles per second regardless of whether the light source is moving toward you, away from you, or standing still. If you stop and think about it, that’s really counterintuitive. This is one of the details that led to Albert Einstein’s theory of relativity, which allows for weird effects like clocks ticking at different rates.

The Big Bang Model Has a Light/Time Problem

The Big Bang model has its own version of a distant starlight dilemma, the horizon problem.3 It was one of several reasons Big Bang theorists tacked a process called inflation onto the Big Bang story.4 Inflation solves those problems, but it creates others that are arguably even worse. Former proponents now harshly criticize inflation, claiming it isn’t even a scientific theory.5 Purported “smoking gun” evidence for inflation in 2014 was quickly retracted.6

Moreover, distant galaxies often seem more mature than expected by Big Bang reckoning. If one assumes distant starlight really does take billions of years to reach us, we should be seeing the most distant galaxies not as they are now but as they were more than 13 billion years ago, shortly after the supposed Big Bang. These most distant galaxies should look “immature” and “unevolved,” yet they routinely contradict this expectation.7

Conventional astronomers therefore claim galaxy evolution somehow occurs much faster than they thought. But this assertion does nothing to explain how galaxy evolution could occur, let alone so quickly, nor why their previous expectations were so wrong.

These observations mean that either there’s something wrong with evolutionary ideas about galaxy evolution, or the assumption that distant light takes billions of years to reach us is mistaken—or both.

As discussed below, it’s at least theoretically possible that distant starlight might still be reaching us quickly even today. If that were the case, the correct explanation would not be a creation week miracle, since God finished His creative work by the end of Day 6 (Genesis 2:1-2). In that case, the explanation would be understandable in terms of normal physics.

Even if God used a miracle to get starlight to us quickly, we may be able to understand the effects of the miracle. For instance, if God decreed that c had a much higher value during the creation week, this is simply a miracle we can’t explain scientifically. But such a miracle might have left behind astronomical clues we can explain better than Big Bang advocates can. Hence, it’s useful from a theological perspective to try to understand how God brought distant starlight to Adam’s eyes, even if He used a miracle to do so.

Can We Even Talk About a Distant Light Problem?

Remember that physicists measure c by bouncing light off a mirror and measuring the total round-trip time. You might wonder “Why do you need a mirror? Why not just use two clocks separated by some distance?”

The speed of light is so fast that you’d need precisely synchronized clocks to keep from getting a wildly erroneous answer. However, according to well-established relativity theory, even if two clocks next to one another start out synchronized, the very act of moving one of the clocks causes them to become unsynchronized. Despite many clever attempts, no one has ever figured out a way to get around this difficulty. Apparently, it’s impossible to measure the one-way speed of light.

But if measuring the one-way speed of light is impossible, then it’s also impossible to calculate the time for distant starlight to reach us. That travel time is apparently unknowable. And if this travel time is unknowable, can we even talk about a light travel time problem? Is such a problem even real?

Even conventional physicists have acknowledged it’s theoretically possible that light from distant stars could reach us in no time at all, provided the outbound speed of light is c/2.8 This would imply we’re seeing the universe in real time, with no time lag.

Relativity Theory to the Rescue?

As the above discussion suggests, most creationists think Einstein’s theory of relativity is the key to answering this question.9 They’ve generally taken two approaches to this issue. One involves our inability to measure the one-way speed of light. This inability is closely related to the fact that according to relativity theory, events seen by one observer as happening at the same time don’t necessarily have to be seen as simultaneous by another observer.

A second approach, first proposed by physicist Dr. Russell Humphreys,10 makes use of something called time dilation. Both theory and experiment indicate that clocks can tick at different rates due to differences in gravity. To put it simply, gravity makes clocks tick slower. This raises the possibility that clocks in deep space could tick much faster than clocks on Earth, allowing billions of years since creation to elapse in deep space but only 6,000 years as measured by clocks on Earth.11 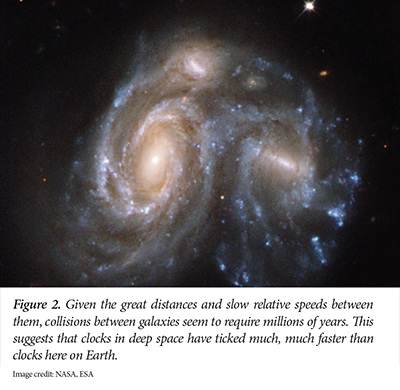 These approaches have their pros and cons. As discussed below, time dilation seems better able to explain deep-space observations that imply vast ages, such as colliding galaxies (Figure 2). But other creationists question whether Humphreys’ original time dilation model is capable of providing the billions of years of gravitational time dilation needed for it to work.12

An infinitely fast inbound speed of light is an easy-to-understand way to answer the distant starlight objection, but many see it as philosophically and scientifically unsatisfying. An even bigger issue is that galaxies are usually so far apart that one wouldn’t expect collisions between them to occur in just 6,000 years. Yet, computer simulations do a very good job of reproducing the appearances of colliding galaxies.13 This strongly suggests that these collisions are the result of real processes over time and not simply illusions caused by God creating some galaxies very close to one another.

Recently, Humphreys proposed a theological option in which God caused c in deep space to be much greater on Days 1 through 4 of the creation week. Interested readers may view his explanation online.14 Although it’s too early to unreservedly endorse, this option appeals to me for a couple of reasons.

A much higher deep-space speed of light is a fairly obvious way to get distant starlight to us quickly. And by limiting this higher value of c to Days 1 through 4 of the creation week, it avoids some potential problems that plagued previous “faster speed of light” creationist proposals.

In relativity theory, time can be thought of as a dimension like length, height, and width. These four dimensions intertwine to form what physicists call spacetime. All objects travel through spacetime at the speed of light c, as physicist Lewis Epstein explains:

That implies that deep-space clocks were ticking trillions of times faster than clocks on or near Earth. This would give ample time (as measured by clocks “out there”) to explain deep-space observations implying long ages while also getting distant starlight to us quickly.

Creation critics may not like the suggestion that c in deep space was once much greater than it is now. But since none of us can actually measure c in deep space (either now or in the past), this is a philosophical objection, not a scientific one. Within a biblical worldview, it makes perfect sense that the Lord Jesus might have done something like this. After all, He indicated in His Word His intention to get light to Earth quickly (Genesis 1:14-19).

Creation scientists haven’t yet nailed down all the details of the answer to this question, but by rejecting dubious evolutionary philosophical assumptions, they offer plausible solutions that agree with known physics.

*  Dr. Hebert is Research Scientist at the Institute for Creation Research and earned his Ph.D. in physics from the University of Texas at Dallas.