Christ Jesus, who, being in the form of God, did not consider it robbery to be equal with God, but made Himself of no reputation, taking the form of a bondservant, and coming in the likeness of men. And being found in appearance as a man, He humbled Himself and became obedient to the point of death, even the death of the cross. (Philippians 2:5-8)

This famous passage is not often emphasized during Christmas since the season’s focus is on the social and circumstantial events surrounding the birth of our Lord Jesus. However, the Holy Spirit gave the apostle Paul a majestic record of what transpired in the courts of heaven to bring about the incarnation of the Messiah. These succinct statements provide a unique picture of who the Lord Jesus is, how the great eternal Creator became man, and what He accomplished on our behalf on the cross.

Jesus Christ Is the Creator

Whenever we pose the gospel, it is incumbent on us to make sure that we introduce Christ as the Creator—setting the stage with who Jesus is before we tell what He did. The Scriptures are abundantly clear:

God…has in these last days spoken to us by His Son, whom He has appointed heir of all things, through whom also He made the worlds. (Hebrews 1:1-2)

In the Philippians passage, Paul covers this major issue with the powerful statement that Jesus Christ did not have to “consider it robbery to be equal with God” but possessed the very “form” of God. The word choices reflect the careful connection and unity of the triune nature of God. The “form” of God that Jesus possesses is defined by the Greek word morphe, which emphasizes the “external appearance.” Paul also told the Colossian church that the Lord Jesus was the “fullness of the Godhead bodily” (Colossians 2:9).

Jesus Christ Is Equal with the Father

When the Lord told His apostles, “I and My Father are one” (John 10:30), He was most certainly speaking of the equality that Paul cites in Philippians. It says that Christ “did not consider it robbery to be equal with God.” The unusual choice of words analyzes the reality of the “equality.”

The word translated “consider” is hegeomai, which designates a leader who has determined the best solution to a dilemma. The word is used to identify leaders (e.g., chief, governor, judge) as well as the attributes of those who lead well (with the ability to give an account, show esteem, have the rule over, think wisely).

Jesus Christ, during the eternity prior to His incarnation, did not come to the conclusion (using all knowledge) that He was in any way inferior to God the Father. Jesus Christ was “equal to God.” Once again the word choice is absolute. Jesus the Creator is isos, the primary word for total equality both in the sense of quantity and quality—with no “robbery” of either amount or value. Whoever and whatever the Second Person of the Godhead may be, there is absolutely no necessity to “grasp” or “steal” or “overcome” any attribute that God possesses. 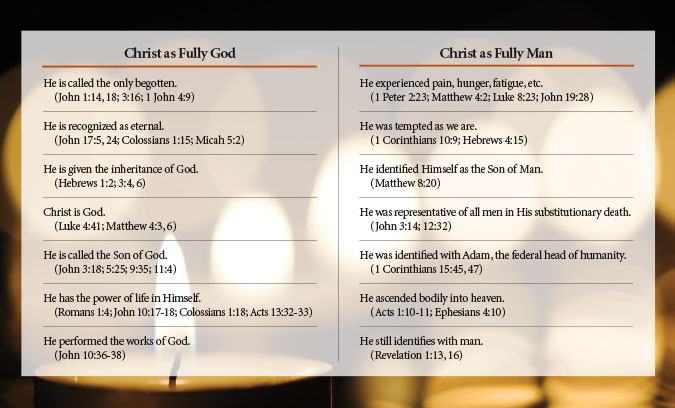 It is with the word keno that the transition from the Second Person of the Godhead to the Son of Man begins. Keno is translated in most Bible versions by the phrase “made Himself of no reputation.” Keno is only used five times in the New Testament and is translated with phrases like “make of none effect,” “make of no reputation,” “make void,” and “be in vain,” always in the context of emphasizing a self-induced reduction or emptying of power or assets. That is, the person involved consciously “gives up” or “discards” or “nullifies” a condition or set of attributes that they owned or controlled, and they became “lessened” because of that conscious action.

That one key word verifies that Jesus the Creator consciously and with His own volition divested Himself of His “omni” attributes so that He could become fully the “bondservant” and inhabit the “likeness of men.”

The succinct passage in Philippians 2 also gives us the additional clarity that this divestiture of attributes accomplished the unique transition from full glorious deity, shared by the Trinity from all eternity past (John 17:5, 24), to the “appearance” and “humility” of humanity. The Creator emptied Himself under His own power and will, “taking” the “form” (morphe, the same word used to describe His equality with God the Father) but “found” Himself as a “bondservant.”

At this point the voice of the verb changes. Previously, all the verbs describing what the Lord Jesus was doing were in the active voice. That is, the Creator is doing the action (the emptying and the taking) to Himself. Suddenly, active voice changes to passive and the Lord Jesus is acted upon. He “found” Himself in the “appearance as a man.” The book of Hebrews tells us that the Lord Jesus understood that “a body” had been “prepared for Me” by His Father (Hebrews 10:5).

All of this was done that He might “likewise [share] in the same” (Hebrews 2:14) because “He had to be made like His brethren” (Hebrews 2:17) so that He could be “in all points tempted as we are, yet without sin” (Hebrews 4:15). The great eternal Creator was willing to become man that He might fulfill all the aspects of the salvation that the triune Godhead had ordained before “the foundation of the world” (1 Peter 1:20; Revelation 13:8).

Jesus Christ Was Both Fully God and Fully Man

No celebration of the incarnation of Jesus Christ, the Creator of all things (John 1:1-3; Colossians 1:16), would be complete or satisfactory if we did not celebrate the reason for His incarnation. That reason is summarized in this verse:

For He made Him who knew no sin to be sin for us, that we might become the righteousness of God in Him. (2 Corinthians 5:21)

When you gather with your families or with your church friends—or even as you unwind with your Bible in your private devotions—please give your mind and heart to meditate on these precious words:

Knowing that you were not redeemed with corruptible things, like silver or gold, from your aimless conduct received by tradition from your fathers, but with the precious blood of Christ, as of a lamb without blemish and without spot. He indeed was foreordained before the foundation of the world, but was manifest in these last times for you. (1 Peter 1:18-20)

May your Christmas season be filled with the “praise of the glory of His grace” (Ephesians 1:6).