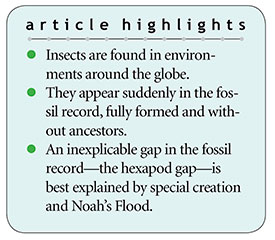 Insects are ubiquitous on Earth. They fly through the air, live in trees, walk on or under the ground, and even live or hunt in water. Some are appreciated, some are not, but they are critical to the food chain. They pollinate plants, help recycle waste, and perform other important tasks. But they are problematic pests to the grand evolutionary story due to their rapid and diverse appearance in the fossil record, followed by a huge, inexplicable gap.1-3

Insects appear suddenly in the fossil record, fully formed and without ancestors.

Insects first appear about 385 million years ago, according to evolutionary dating. The earliest known insect, which appeared suddenly without any insect precursors, was a wingless creature that looked much like a modern silverfish. But after this initial appearance, there was allegedly an absence of insects in the sedimentary rocks for the next 60 million years.1-3 There was no sign of a single roach, grasshopper, or dragonfly. This huge evolutionary gap between 385 million and 325 million years ago is known among paleontologists as the hexapod gap.4

At the end of this gap, an enormous diversity of insects, including many kinds of flying insects, appears suddenly in the rock record with no ancestors. One evolutionary researcher recently stated:

There’s been quite a bit of mystery around how insects first arose, because for many millions of years you had nothing, and then just all of a sudden an explosion of insects.5

The huge problem is that all the evolutionary precursors to this explosion of insect diversity should be found in the hexapod gap, but according to evolutionists, “Tragically, fossils of stem-group hexapods remain elusive.”2

So, how have evolutionists tried to solve this hexapod gap conundrum? One popular hypothesis proposes that insect abundance and size were constrained by low oxygen levels in Earth’s atmosphere during the late Devonian geological period. The overall idea seemed to have some support based on a model of atmospheric oxygen over the past 570 million years developed by Yale geochemist Robert Berner in which he compared ratios of carbon and oxygen in ancient rocks and fossils.6 Based on this model, atmospheric oxygen that coincided with the start of the hexapod gap was lower than 15%. Modern atmospheric oxygen is about 21%. The low oxygen levels were thought to have somehow suppressed evolution of the hapless insects.

In a study published earlier this year, researchers updated the decade-old oxygen level model using more extensive carbon records.3 The new data showed that the dip in atmospheric oxygen during the late Devonian did not exist. One of the study’s coauthors, Stanford paleontologist Jonathan Payne, stated, “What this study shows is that environmental inhibition by low oxygen can be ruled out because it is not compatible with the most current data.”5 Evolutionary researchers are now back to square one in explaining the pestering hexapod gap and why insects show up suddenly in the fossil record fully diverse in all their various kinds with no evidence of evolution.

Insects were created by God according to their kind, fitting perfectly with the facts of science.

So, how do creationists make sense of these data if evolutionists can’t? As indicated in the Bible, about 4,500 years ago a global catastrophic flood rapidly buried billions of plants and animals now found worldwide as fossils in sedimentary rocks. The gap is readily explained by ground-dwelling, wingless insects inhabiting lower-altitude ecological zones being buried earlier in the Flood, while the winged insects and those inhabiting higher altitudes were buried later. The reason insect fossils appear suddenly and show no sign of having evolved is because they were created by God according to their kind, fitting perfectly with the facts of science.