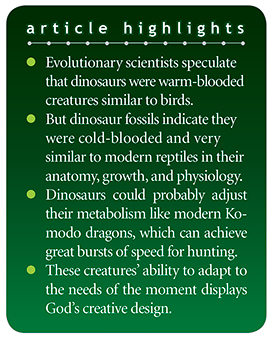 Scientists have long wondered how cold-blooded reptiles (ectotherms) like dinosaurs could have been so active and vigorous. Anatomical analyses of dinosaur fossils have clearly revealed that they were very similar in their anatomy, growth, and physiology to living reptiles.1,2 Despite this, evolutionary speculation that dinosaurs may have been warm-blooded, bird-like creatures that were very different from today’s reptiles has become extremely popular. New research in reptile genetics and physiology and its comparison to what we know about dinosaur fossils reveal exciting insights into this debate.

Dinosaurs have a variety of features that indicate they were cold-blooded like many living reptiles. For example, an analysis of dinosaur skulls (including theropods such as T. rex) reveals narrow nasal cavities that lack the nasal turbinates many warm-blooded mammals use to filter and warm air. Instead, the theropods had reptile-like respiratory systems that would have provided low lung ventilation rates. Fossilized soft tissue associated with the abdominal cavity of a theropod dinosaur revealed a lung ventilation system like that of modern crocodiles.1,2

Based on these findings, researchers have proposed that many dinosaurs had low metabolic levels during resting or low-activity periods but could rapidly expand their lung ventilation levels for bursts of activity associated with running, attacking, and defensive maneuvers. This type of adaptation would also have allowed large dinosaurs to sustain life within a reasonable level of caloric intake. Indeed, research showed that if large dinosaurs were warm-blooded, they wouldn’t have been able to ingest enough food to maintain their metabolism.1,2

Recent studies of Komodo dragons and alligators support these scientific predictions about dinosaur metabolism. Komodo dragons are the biggest land lizards on Earth and can reach 10 feet in length and weigh up to 300 pounds. They are top-level predators that live on remote Indonesian islands, and their amazing chemosensory systems enable them to detect large prey, like deer, from over seven miles away.

Since they’re relatively large cold-blooded reptiles, they can also provide possible insight into dinosaur metabolism. Komodo dragons rapidly ramp up their metabolism to near-mammalian levels for incredible bursts of speed and even extended arduous sprints. When researchers recently sequenced the genome of the Komodo dragon and compared its various metabolic genes known to be common among reptiles, they discovered some genetic novelties associated with this ability.3,4

In yet another study, researchers analyzed the skulls of both a T. rex dinosaur and living alligators.5 They showed that, similar to a T. rex, alligators have two large holes on top of their skulls. In alligators, these holes are filled with specialized blood vessels and thermoregulatory tissues. Thermal imaging showed that the tissues in these holes metabolically fluctuated with external temperature. The researchers deduced that this was part of a crosscurrent circulatory system associated with an internal thermostat. Until this study, scientists had erroneously assumed that these spaces in dinosaur skulls contained muscles. Given that dinosaur brains are similar in shape and structure to living reptiles like alligators, this new finding comes as no surprise.6

The continually emerging similarities between dinosaurs and living reptiles are confirming dinosaurs as true cold-blooded reptiles, not relatives of birds. And these new research findings give us amazing insights into God’s creative genius as revealed in His creatures’ unique adaptive design.