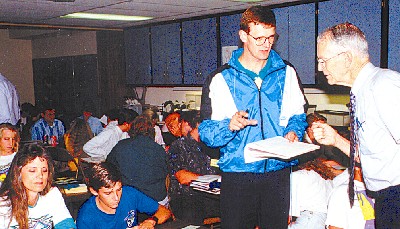 Good education for American school children has always been of primary importance to all. President Bush has placed education reform at the top of his political agenda. Charter schools, private schools, parental choice, vouchers, local control, home schools—all controversial positions. Maybe I am biased, but it seems to me like evolution and the evolutionary worldview are the crux of the issue. They always come up in the discussion, but are seldom dealt with honestly, and thus the problem continues.

The Kansas State Board of Education (KBE) addressed the issue in August of 1999 when they removed evolution from its unwarranted position as a "unifying principle" in science as proposed in new curriculum guidelines. The new guidelines mirrored those produced by an elitist group of ideologies on the national level and are similar to those proposed in nearly every state in the Union. They aggressively pursue the evolutionary worldview in the name of science.

The science guidelines as adopted by the KBE began by carefully defining the terms microevolution and macroevolution, then limited the study to the observable evidence for microevolution such as mutation, genetic recombination, extinction, adaptation, etc., which are all observable phenomena. They avoided the philosophy of macroevolution—that these small observable changes add up to hypothetical big changes, eventually producing school children, their morals, society, etc., from animals and animal behavior. This elicited rousing denunciation from evolutionists who risked losing total control of education and having their philosophy of naturalism exposed as a religion masquerading as science. Money poured into Kansas from evolutionary sources worldwide, and in the elections of 2000, the Board majority tilted back to evolution. The gains are now being systematically dismantled.

The 1999 tack taken by the KBE was the proper one (given the current political climate and judicial bias), and several states are moving in a similar fashion. Unfortunately, concerned creationists in other states are trying to mandate teaching Biblical creation in the public schools through legislation or legal force. However proper and logical these ideas are, they are doomed to failure, and will only result in another legal precedent against good education.

Meanwhile, textbooks are bulking up on evolutionary concepts, often unfounded and frequently known to be wrong. For instance, the concept of embryonic recapitulation frequently appears, as do the peppered moths, Neanderthal "ape man," etc., all concepts known by scientists to be wrong. Their actions do not make sense until we remember that they are pushing a worldview and a basis for relative morality, not good science.

Here's my recommendation. Brand evolution as a religious doctrine, as done in the February 2001 Impact article, and demand that religion be removed from our public schools. Demand that science class time be restricted to scientific concepts and observable scientific data, not philosophical speculations about the unobserved past. Furthermore, we can insist that the evidence which doesn't favor evolution no longer be censored and that no teacher can be punished for including it. Do not try to introduce creation. This is a "religious" concept and unacceptable to the nation's courts. But do insist that the evolutionary fixation on animal behavior as normative for human behavior not continue as the basis for the moral code of schools, leading to promiscuity, violence, low value of life, and no responsibility for actions.

We can't do what we would like, or even all that is legal, but maybe we can make these practical strides.