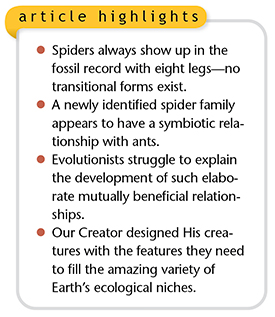 The delightfully creepy spider belongs to a class called Arachnida—which is distinct from the “bug” class Insecta. Not surprisingly, according to the fossil record, spiders have always been spiders with four pairs of walking legs.1 Their origin is much-debated by invertebrate zoologists. Regardless, each time fossil spiders are found, they are 100% spiders, not ambiguous evolutionary ancestors with partial or transitional features.

In 1999, a significant discovery was made in the arena of the arachnids. Biologists at Midwestern State University’s Dalquest Desert Research Station in the Chihuahuan Desert in West Texas found a tiny spider they initially couldn’t identify. Dubbed the Texas Mystery Spider, it turned out to be “a big deal in the world of spiders.”2

Researchers eventually determined that Myrmecicultor chihuahuensis is a new family of spiders that lives in an apparent symbiotic relationship with at least three different kinds of ants. More than half of animals known to biology live in a symbiotic relationship in their community. It may turn out that these ants and Myrmecicultor share a mutualistic condition. In other words, these creatures might benefit from one another while neither one suffers, which is similar to what we see with lichen, green algae and fungus living together where both benefit from the relationship.3 Zoologists can investigate this interesting relationship between arachnid and insect without so much as a nod to evolution. Indeed, the evolutionary explanation of symbiotic origins is tenuous, conveniently occurring “millions of years ago,” as one report presumes: 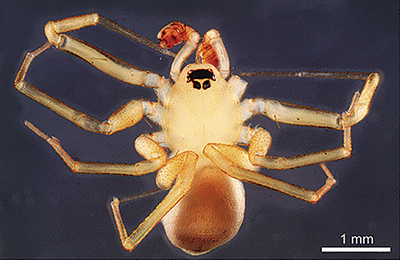 When life on earth developed, symbiotic associations arose as a successful strategy millions of years ago, with which organisms of different species cooperate as a close-knit community, to gain an advantage in the struggle for survival. However, we still largely do not know why they do this, what the real benefits of such partnerships are, and which molecular mechanisms are important.4

Symbiotic relationships are a big roadblock to evolution theory. Consider something called cleaning symbiosis between little cleaner shrimp and the large predatory fish whose teeth they clean. You can view this association firsthand in most of the nation’s aquariums. How could such a complex relationship evolve through chance and time? The tiny shrimp would somehow have to evolve the idea to swim into the menacing mouth of a fish that naturally eats small invertebrates like shrimp.

Although Myrmecicultor is a mystery to secular scientists, it’s not one for the creationists who see spiders as having always been spiders—and ants as having always been ants. They, like other animals and plants, were designed by the Creator with the ability to move in and fill Earth’s amazing variety of ecological niches.