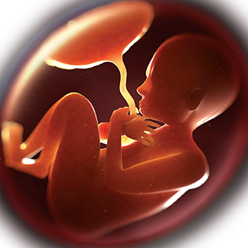 The complex mammalian placenta is an organ to which, in a sense, we all owe our lives. It’s formed by the fusion of maternal and embryonic tissues and establishes vascular contact between mother and child at the onset of pregnancy.

Evolutionists struggle to explain the origin of placental mammals,1 but the Bible states they originated during creation week thousands of years ago. Vivipary (modes of reproduction) for humans involves the development and growth of the embryo inside the body of the mother, eventually leading to the birth of the baby. This is indeed an amazing process designed by our Creator,2 but evolutionists can only say “viviparity has evolved many times.”3 Viviparity means to give live birth as opposed to hatching from an egg (i.e., oviparity). It’s common among many animals, including some insects like aphids.

Evolutionists struggle to explain the origin of placental mammals, but the Bible states they originated during creation week thousands of years ago.

The unique placenta is complex and found in many vertebrate groups. For example, when evolutionists address the placental origin found in large order of snakes and lizards (Squamata), they must appeal to the highly questionable doctrine of convergent evolution. Convergence is the supposed development of similar or analogous structures—such as placentas—in creatures that are unrelated as each separately adapts to a similar way of life. Two evolutionists said convergence in the squamates is “astonishing,”4 while another evolutionist, Kathleen Smith, said the specialized and complex placenta is an “invention.”5 Smith also said, “Viviparity is common in squamates, where it has evolved independently at least 100 times.” This is an altogether amazing statement. To have an organ as complex as the placenta evolve by time and chance only once stretches into incredulity, but an independent evolution of this “invention” at least 100 times? Darwinists maintain convergent structures were not present in the last common ancestor of those groups, but of course fossil evidence of the last common ancestor has yet to be found in any group. A more reasonable explanation is that similarity among complex structures such as the placenta is clear evidence of a common Designer.

Similarity among complex structures such as the placenta is clear evidence of a common Designer.

Evolutionists also appeal to the doctrine of homology—the basic similarity of structures in various creatures—which they assume to be due to descent from an unknown common ancestor. But the homology of the placenta in various viviparous organisms is controversial at best.

Layered membranes are on the fetal side of the placenta: the allantois, amnion, and chorion. The placenta also has the “primitive” yolk sac,6 but there is actually nothing primitive about this structure—also called the umbilical vesicle. Indeed, it’s absolutely critical for the developing embryo. It’s true that the yolk sac of birds and reptiles contains yolk to nourish the embryo, but in Eutheria (placental mammals) the yolk sac “contains no yolk.”7 The next logical question is, if it doesn’t have yolk, then what does it have that makes it so important? The answer is blood—or blood islands—that is important in early embryonic blood supply. One can only wonder why evolutionists would call this structure by the wrong name and label it primitive when it’s absolutely necessary for the survival of the developing individual.

Evolutionary descriptions of placental origin and its profound structures are found wanting, but a design explanation fits the scientific observations far better.

In conclusion, the placenta is formed of both maternal and fetal tissues supporting nutritional and respiratory functions of the baby via intimate vascular contact. Evolutionary descriptions of placental origin and its profound structures are found wanting, but a design explanation fits the scientific observations far better.

* Mr. Sherwin earned his master’s in zoology from the University of Northern Colorado. He is Research Associate, Senior Lecturer, and Science Writer at the Institute for Creation Research.