Copulation Didn't Kill the Frogs, the Flood Did | The Institute for Creation Research
Skip to main content 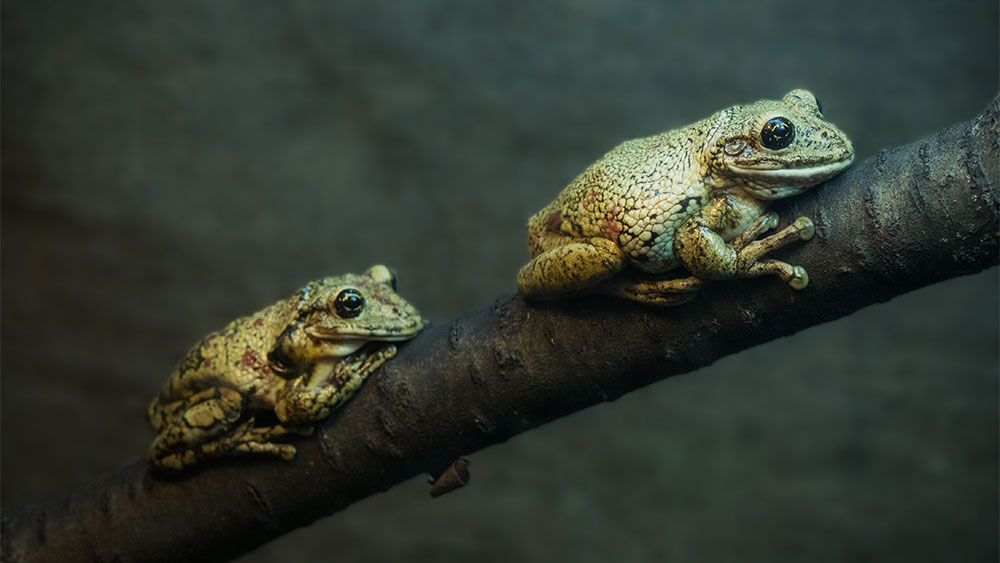 NEWS     CREATION SCIENCE UPDATE
Copulation Didn't Kill the Frogs, the Flood Did
BY TIM CLAREY, PH.D. *  |
THURSDAY, JULY 28, 2022
Evolutionary scientists recently studied 168 frog fossils from central Germany, concluding that the frogs all drowned while aggressively mating. They claim to have arrived at this preposterous assertion by the process of elimination. Unfortunately, the catastrophic burial of the frogs in the global Flood, the most obvious answer, was never considered.

The German frog fossils were found in a sedimentary unit known as the Eocene (or Late Flood) Geiseltal biota.1 These type of mass deposits are known as a Lagerstätten, “fossil deposits that preserve unusually high-quality palaeontological information, characterized by high-fidelity preservation as (semi-)articulated skeletons and/or soft tissues.”1 There are over 150 known sites across the world, mixed throughout all levels of the Flood rocks.2 In addition to the frogs, the Geiseltal biota includes over 50,000 other fossil vertebrates (turtles, crocodiles, mammals, birds, snakes), insects and invertebrates (bivalves and snails), totaling 125 types of animals.1,3

Publishing in Papers in Palaeontology, the scientists from Ireland and Germany found that most of the Geiseltal vertebrate fossils were found in lignite (low-grade coal) beds within the larger rock unit.1 Lignite was mined in this region since the late 19th century up until 1993.1 Most frog fossils are interspersed within six, stacked lignite beds, varying from 33 feet to 164 feet thick. The plants in the coal are a mixture of flowering and non-flowering species. Cross-bedded sandstones (indicative of water flow) and siltstones lie between the coals.

Some of the frogs were found in coals in sinkholes or depressions where the rocks below collapsed due to underlying salt dissolution, forming local traps. Sink-hole coals are interbedded with chalky carbonate beds that also show evidence of water influx.1 Some other frog fossils were found in layers that show evidence of water flow (cross-bedded sandstones). Uniformitarian geologists interpreted these as river deposits. Fossil wood found in these layers had a preferred orientation, indicating a dominant direction of water flow.1 Some frogs fossils exhibited a preferred orientation from water currents too.1

Of the 180 fossil frogs studied in this report, most were well-articulated (bones still connected to one another) or nearly complete.1 Some even preserved remnants of soft tissue.1 The science team examined nine different possible explanations for the frog fossils, from changes in salinity of the water, to freezing temperatures, to disease and old age. They even reasoned, “Some specimens may have died due to high water turbulence during floods; this may apply especially where specimens show a preferred orientation…”1

However, the scientists ultimately chose the hazards of mating behavior as the culprit, claiming that the male frogs drowned the female frogs during prolonged copulation.1 One hitch in this story is that there is no way of telling which fossil frogs were male or female in order to back their claims.


During mating, frog males mount females from behind and then climb on top of the female's backs. On land, this is not an issue for the females. But some species of frogs mate in water, which can force the females under the surface and drown them if the males take too long. This mating behavior is seen in some modern species of frogs.3

Baker added, "This poses another potential mystery: After millions of years of frog evolution have elapsed, why are females still drowning during sex? For species who still procreate this way, the benefits of mating in water must outweigh the costs—but it's unclear how."3

Of course, the better solution is that there has been no frog evolution. Frogs have always been frogs. And these frogs did not drown during sex, as claimed. The best explanation for these frog fossils and the entire Geiseltal biota is the one scenario that was never considered—the global Flood.

The Flood better explains the thick, repetitive coal beds. Each new layer of coal was transported by the assuaging (back and forth) waters of the Flood as it drained off the land. The frogs and the various other animals and plants were likewise transported by floodwaters. This better explains the stacked coal seams. Similar to the thick Tejas (receding Flood) coal seams in Wyoming, the vast offshore Tejas coals of Asia, and the Tejas lignite layers between lava flows on Iceland, all of these deposits are best explained by the receding phase of the Flood.4-6

The preferred orientation of some of the frogs and the tree fossils, combined with the rock evidence of water flow (forming cross-bedded sands), shows that significant water transport occurred. In addition, the mixing of so many diverse animal groups (125 types) and different types of plants in the same unit also supports catastrophic mixing during the Flood. And the preserved soft tissues demonstrate that these fossils are only thousands of years old, not 45 million.

Conventional scientists never consider that there was a real historical, global Flood just 4500 years ago. Instead, they prefer to make up outlandish stories to try and explain what they see, all the while blinded by their uniformitarian beliefs. Jesus warned us that in the last days, many will deny the Flood (2 Peter 3). But the evidence for the Flood is everywhere in the sedimentary rocks of the globe.7

*Dr. Clarey is Research Scientist at the Institute for Creation Research and earned his doctorate in geology from Western Michigan University.
More Days of Praise