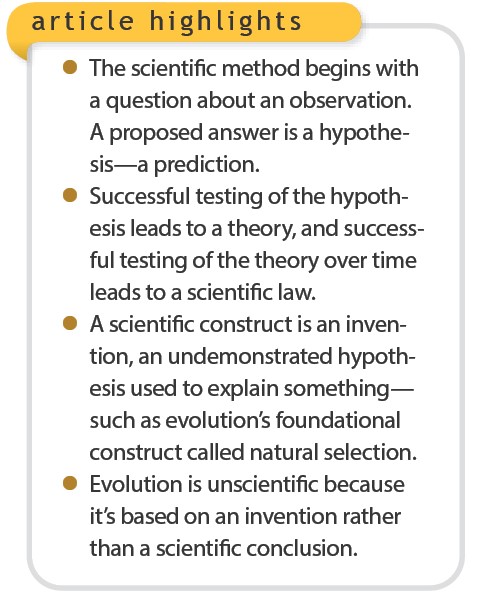 Evolution is broadly and almost unequivocally accepted as fact. Creationists who try to present the evidence contradicting it are often met with “How can you go against proven science?” But is evolution really based on science?

How Does Science Work?

The scientific method is an investigative process based on stringent observations and testing. It starts with a speculation based on logic. This scientific hypothesis is a prediction, essentially an educated guess about how observations of nature might work together or what causes them to happen. As such, a hypothesis is a limited explanation of a phenomenon.

A scientific theory is a demonstrable step beyond a hypothesis. It’s a logical explanation of an aspect of nature based on confirmed observations. In other words, the initial hypothesis’ prediction has been tested and substantiated to a high degree of scientific confidence. An explanation of a phenomenon is categorized as a theory only if the data merit the classification. A theory must therefore have substantial explanatory power.

Only after a series of observational testing from many different angles does a theory become scientific law. The key to this process is testability. A hypothesis must be readily testable to move beyond a hypothesis, and a theory must be exhaustively testable to be called a law. Scientific precision results from a prediction that’s successfully gone through the rigors of the scientific process and has a demonstrable conclusion.

How does evolution measure up to the scientific method? At first glance, Darwin’s “I think” drawing of the first rudimentary evolutionary tree appears to be a hypothesis. He observed that species vary widely per environment. The Galapagos Islands are a showcase for dramatic speciation, and Darwin used his observations there as a springboard for his idea that creatures somehow evolve.

But Darwin never observed one creature evolving into another creature kind—his imagination was the source of his idea. Even today, the examples evolutionists offer as demonstrations of evolution are all low-confidence science.1 Darwin conjectured about the forces that might drive creatures to change and invented a mystical concept called natural selection from outside his observations.

Darwin never saw nature selecting; he observed speciation, a step in the process of how creatures adapt to changing environments. His concept of natural selection isn’t built on objective empirical evidence; it’s a subjective framework for interpreting observations. 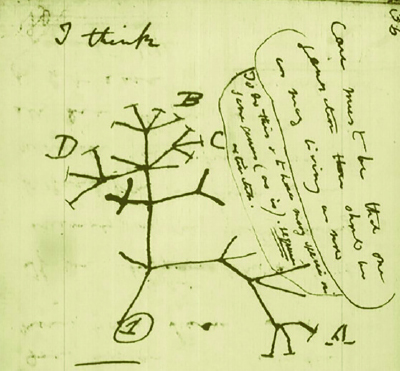 Here’s the point: Nature can’t select—it has no such ability. When Darwin offered natural selection as a means by which creatures change, he invented an unseen intelligent agent—an invisible, undetectable power—that supposedly exerts remarkable creative power. Darwin thus conjured an “invisible hand” that propels living organisms to somehow change in just the right ways to become more fit for survival.

But nature has no volition, mind, will, or consciousness. Instead, it’s the creature’s own innate abilities that lead to its adaptation. The creature possesses the potential responses to change for its programmed systems to select; nature does not. Nature is a set of vibrant, complex, ever-changing conditions—and that makes the creatures’ continuous reading of and appropriate adaptations to nature’s changing conditions all the more remarkable.2

In contrast, Darwin’s natural selection is a fictional account of living processes driven by imagination, not observation. As such, it’s a construct, an abstract idea largely dependent on the subject’s mind. By definition, a construct isn’t real and has no true explanatory power, although it’s undemonstrated speculations can be misused as an explanatory cause.

Science must be data-driven, not imaginary construct-driven. Darwin’s “invisible hand” of natural selection has no basis in reality and doesn’t measure up to the dictates of science.

The invisible hand in nature is the creative hand of our Creator, Christ Jesus. He designed creatures to respond to their environments in just the right way from the beginning: “By Him all things were created that are in heaven and that are on earth.”3