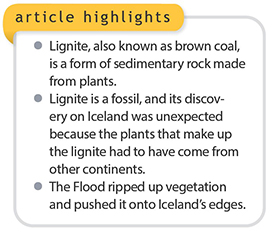 Recently, a colleague alerted me to some unusual fossil discoveries on Iceland that are best explained by ICR’s Flood model.1,2 The fossils of interest are plants, specifically lignite,3 trapped between lava layers. It’s the plants’ source that’s the real mystery. How did these plants arrive on an island in the middle of the Atlantic Ocean?

Lignite layers have been found within six different sedimentary units along Iceland’s coast, mostly on the northern and western flanks.1,2 Some of these layers contain leaf fossils, stems, and pollen. About 40 species of flowering plants, seven conifers, and four ferns and fern allies have been identified in the lignite beds.2 Many of these same plant fossils are found on North America and Europe at the same geological level.

Conventional scientists believe that the plants that make up lignite beds grew in the same place they were buried. In this case, the plants were sealed off and preserved by lava flows. But, plants cannot materialize on this island. Their presence requires a migration path from either North America or Europe or both. Although most of the species identified could have been dispersed to Iceland via wind, insects, or birds, some of the species are more problematic.

The authors of one of the studies clearly recognized this issue.

At least Fagus [beech] and Aesculus [buckeye and horse chestnut] have no potential for long distance dispersal and taxa such as Ulmus [elm], Fraxinus [ash], and Tilia [basswood] have a very restricted dispersal radius. Only Betulaceae [birch] and Rhododendron would have had the possibility to reach the island crossing extensive water masses.1

Iceland is thought to have resulted from an anomalously high outpouring of lava called a mantle plume.4 It formed in the middle of the Atlantic Ocean. According to ICR’s research, Iceland’s volcanism began late in the receding phase of the Flood during the deposition of Miocene (Upper Cenozoic) units. At this time, there was already a sizable ocean separating Iceland from the continents of Europe and North America.

Uniformitarian scientists have resorted to claims of “stepping stone” islands to explain the presence of these diverse plant species, a situation in which the plants essentially “island hopped.”1,2 But, there is little evidence that the necessary closely spaced islands ever existed. Today, there are no sunken volcanoes between Europe and North America to provide an island pathway for these plants.

Secondly, there is no indication that the plants ever actually grew on Iceland. The thin sediments and lignite beds trapped between the lava flows show no evidence of rooting or erosion between layers. What is observed are extensive, flat-lying lava layers, one on top of the other, with no large time gaps in between.5

Is there a better explanation? ICR’s Flood model suggests these plants were ripped off the land surface as the floodwaters rose over the pre-Flood continents. Many flowering plants lived at higher elevations and were the last to be inundated and stripped away.6 These plants were also mixed with ferns and other lower-elevation vegetation.

Catastrophic tsunami-like waves during the Flood’s recession likely washed some of this floating plant debris mat onto the edges of Iceland as it emerged from the sea. Other waves washed plant debris out to the deep ocean, creating coal and lignite far offshore.7 Subsequent lavas, within days or weeks, buried and sealed the plant fossils as lignite beds between flows.

No island hopping is necessary to explain these mysterious plant fossils—just a global flood like no other.

*  Dr. Clarey is Research Scientist at the Institute for Creation Research and earned his Ph.D. in geology from Western Michigan University.