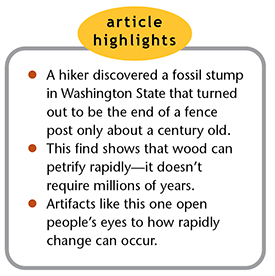 Years ago, an attendee at an ICR Back to Genesis seminar approached me with a fossil he and his daughter had found while on a hike in Washington State. It was obviously petrified wood, which is common in many localities, and it seemed of no particular use in the creation/evolution forum. But its history and how they found the specimen was of great importance.

Petrified wood is often presented in classrooms as an example of great age—for it obviously takes a long, long time to petrify wood, right? But knowledgeable geologists know better. They are aware that wood can petrify quite rapidly if buried in an area surrounded by hot volcanic ash. Ash contains silica, which is melted and mobilized by hot water. Over time, the buried wood soaks up the silica-rich water, which either surrounds each cell of wood or replaces it as the wood decays. This doesn’t take millions and millions of years as is commonly claimed because it’s known to happen rapidly if the conditions are right.1 In fact, petrifying wood can be accomplished in a laboratory where even “hardwood” floors or other objects can be petrified. It doesn’t take long—just the right environment.

But this object was different. The man and his daughter unexpectedly found this wood in a row of shaped wood separated by several feet. It was obviously an object fashioned by humans for it consisted of only a portion of a trunk. This segment had been split from a tree around three feet in diameter. One could see on this six-inch stub where something had been attached—probably barbed wire. The wood appeared to have been part of an old split-rail fence, the underground portion having been petrified while the aboveground part of the fence had rotted away. 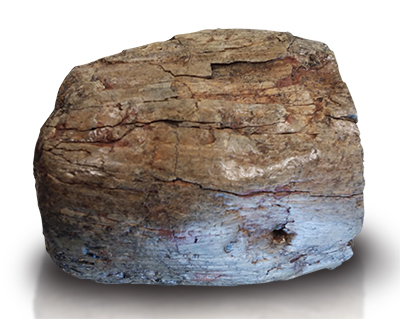 The farm and farmer are gone, but this area has seen farmers for over a century. No record of a long-ago fence was found, but there is evidence of volcanism virtually everywhere in Washington State, including the presence of hot silica-rich water in the recent past. Moreover, extinct volcanoes are visible throughout the area—some only dormant—so all the conditions for rapid wood petrification were met.

This petrified fence stump served me well as an object lesson for rapid geologic processes. I used it as an example of a fossilized human artifact and have made good use of it in lectures, books, and articles. It doesn’t necessarily prove anything, for all honest scientists would admit wood can petrify quickly. But virtually every student is brainwashed into accepting millions and millions of years of Earth history, and petrified wood is presented as a leading example. A fossil like this helps students who have been wrongly taught that it takes long ages to petrify wood to rethink ages of millions of years.

After I used the stump for several years, my friend asked for its return. His daughter wanted to use it for “show and tell” in her class. Now it has returned to ICR and has found additional use in science lectures. It continues to live out its history making a good impression and a good visual and memorable point to start the creation conversation.

* Dr. Morris is President Emeritus at the Institute for Creation Research.