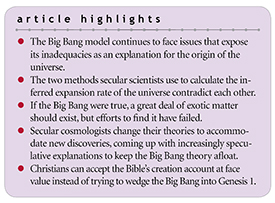 Cosmology is the study of the origin and structure of the universe, and the Big Bang is the dominant secular cosmological model. Some Christians say God used the Big Bang to create the universe, but that model contradicts Scripture at multiple points.1 There have been some recent developments involving the Big Bang model, nearly all of which are bad news for Big Bang proponents.

According to the Big Bang model, the universe was once very dense and hot. Supposedly, the universe began expanding rapidly about 14 billion years ago and is still expanding today. This expansion, inferred from clues within light from distant galaxies, is one of three main arguments for the model.2 A second argument is that the Big Bang does a good job of accounting for the light chemical elements hydrogen and helium. A third is the existence of faint cosmic microwave background (CMB) radiation coming to us from all directions in space (Figure 1). Big Bang proponents interpret the CMB as an “afterglow” from a time about 400,000 years after the Big Bang occurred. 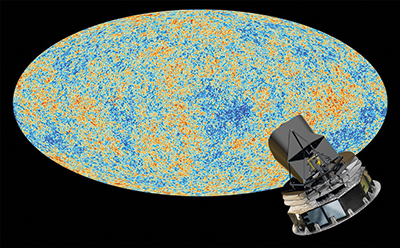 Figure 1. A sky map of the cosmic microwave background (CMB) radiation. Even though the existence of the CMB is arguably the strongest argument for the Big Bang, features of this radiation do not agree with Big Bang expectations. The data were obtained by the Planck satellite.
Image credit: Copyright © 2015. D. Ducros, ESA, and the Planck Collaboration. Used in accordance with federal copyright (fair use doctrine) law. Usage by ICR does not necessarily imply endorsement of copyright holder.

Despite these apparent successes, the Big Bang model has serious scientific problems. One enormous difficulty is that Big Bang proponents have concluded that about 95% of the “stuff” in the universe is composed of mysterious entities called dark matter and dark energy, but they don’t know what these things are. How can Big Bang theorists claim to understand the process that supposedly brought the universe into existence when, by their own admission, 95% of the universe’s contents are unknown?3

As a creation ministry, ICR wants people to be up-to-date on the current version of the Big Bang model, not one that was popular decades ago. For instance, Big Bang cosmologists used to say the universe went through an enormous “growth spurt” called inflation shortly after the Big Bang. However, most theorists today claim that inflation happened first and caused the Big Bang.4

Most astronomers think the universe is expanding, causing galaxies to move away from each other. Scientists use a number called the Hubble constant, denoted by the symbol H0, to characterize this expansion. They use two different methods to calculate H0. One way is to calculate the value directly, using estimated distances and speeds of distant galaxies. A second way is to infer this number by looking at details of the CMB radiation. The values calculated from these two methods conflict with each other, and a recent study hasn’t resolved the issue.5-7

When Big Bang proponents use the CMB to infer a value for H0, they are assuming the Big Bang model is correct. Naturally, if the model is wrong, there’s no reason to expect this method to yield an accurate result. Creationists aren’t surprised these two different methods yield contradictory results. And even though the CMB is arguably the strongest argument for the Big Bang, there are details about this radiation that do not align with the Big Bang model.8 For instance, Cambridge astrophysicist George Efstathiou commented on how the CMB doesn’t match the expectations of inflation theory:

The theory of inflation predicts that today’s universe should appear uniform at the largest scales in all directions….That uniformity should also characterize the distribution of [temperature] fluctuations at the largest scales within the CMB. But these anomalies, which [the] Planck [satellite] confirmed, such as the cold spot, suggest that this isn’t the case….This is very strange…..And I think that if there really is anything to this, you have to question how that fits in with inflation…..It’s really puzzling.9

As mentioned earlier, one of the three main arguments for the Big Bang is that it can account for the observed abundances of hydrogen and helium in the universe. However, this is because the model has an adjustable parameter, like a tuning dial on a radio.10 Big Bang scientists choose a value for this parameter to ensure that the model matches the observed abundances of hydrogen and helium.11

Figure 2. After the Big Bang is “tuned” to give the correct abundances of hydrogen and helium, it produces enough baryonic matter to account for about 20% of the matter most astronomers think exists. The remaining 80% is assumed to be an exotic form of invisible “dark matter.”

Once Big Bang scientists choose their value for this parameter, the model indicates how much baryonic matter should exist in the universe.15 When one adds up the different forms of matter thought to exist, the amount of baryonic matter predicted by the Big Bang is only 20% of the total (Figure 2). Big Bang astronomers think the other 80% is an exotic form of invisible dark matter, discussed in the next section. Previous observations indicated that visible stars and gas could only account for half this predicted baryonic matter, and scientists couldn’t account for the other half.

Last year, astronomers claimed to have solved this problem.16 (Interestingly, another scientist claimed to have solved it one year before that.17) Theorists think the missing baryonic matter should reside in thin, hot strings of ionized hydrogen located between galaxies. Astronomers didn’t detect the hydrogen per se but rather ionized oxygen that they think is associated with the hydrogen. Naturally, Big Bang proponents will see this as good news for their model. However, it’s important to realize that the missing matter hasn’t actually been found directly. Rather, oxygen was found that secular scientists think, based on their models, should be associated with the missing hydrogen.

It’s worth noting that the Wikipedia entry for “Missing baryon problem” has been flagged for possibly making too strong a claim about the problem being solved, despite the obvious anti-creation bias found in Wikipedia articles touching on the creation-evolution controversy.18

As mentioned earlier, many astronomers think 80% of all the matter in the universe is invisible dark matter. Although astronomers deduced the existence of dark matter apart from the Big Bang model, this substance has become very important to secular cosmologists. They recognize the enormous problems in their theories of star and galaxy formation. Many claim dark matter is the “missing ingredient” that can somehow enable their theories to work.19 This is very convenient for theorists. Since no one knows what dark matter is—or even if it really exists—no one can demonstrate that their theories are wrong!20

Because the Big Bang model only allows for 20% of all matter to be baryonic (made of atoms), its proponents must assume that dark matter is something else. Other forms of matter (i.e., free electrons, neutrinos, etc.) do exist but have generally been ruled out as dark matter candidates. The scientists have no choice but to insist that dark matter is some exotic, never-before-observed substance.

So, how is the hunt for this exotic matter going? Not well. Repeated searches have come up empty,21 and theorists are becoming increasingly nervous, if not desperate.

Dark Matter Before the Big Bang?

How desperate? One theorist recently suggested that perhaps dark matter somehow existed before the Big Bang.22,23 How is that possible? Haven’t we been led to believe that the Big Bang was the origin of everything?

This theorist said dark matter came from something called a scalar field that supposedly was present before the Big Bang. A problem with this idea is that only one scalar field is known to exist, and that’s the field associated with the famous Higgs boson. All other scalar fields are hypothetical.

By the way, this should give pause to Christians who say God used the Big Bang to create the universe. If the supposed “bang” was God’s initial creative act, then according to this reasoning dark matter existed before Genesis 1:1. If 80% of all existing matter had an existence before then, did God actually create it prior to Genesis 1:1? If so, why doesn’t the Bible tell us? If not, is dark matter simply eternal? And if it’s eternal, what does that do to Christian theology?

Time Before the Big Bang?

This raises another point. Big Bang scientists had long insisted that speaking of time before the Big Bang was as nonsensical as asking the question “What is north of the North Pole?” Well, apparently the question wasn’t as nonsensical as we were led to believe, because they now routinely talk about time “before” the Big Bang. In fact, inflation theorists now claim the inflation process that supposedly triggered the Big Bang could have been going on for eons by the time the Big Bang supposedly created our universe. This has led to the idea that our universe is only one of an infinite number of universes in a supposed “multiverse.”24

This should demonstrate just how “squishy” Big Bang theories are. Secular scientists simply won’t allow data to falsify them, even if it means tacking on additional hypotheses or accepting concepts that they themselves dismissed as nonsense decades ago, such as time before the Big Bang.

Instead of attempting to harmonize the inerrant Word of God with a flimsy scientific model, Christians would do far better to simply take God’s Word at face value. The universe came into existence not through a Big Bang but by the omnipotent Word of God.

NEWS
A Shocking Case for Creation
Scientific investigation and research continue to reveal the Hand of the Creator. In this case, it is the remarkable electric fish (ray-finned fish, or...
BY: FRANK SHERWIN, D.SC. (HON.)
Shop Related Products
$