Made in His Image: A Camera Made from Living Tissue! | The Institute for Creation Research
Skip to main content

Great photographers have an intuitive sense, coupling interesting subjects with a mastery over the mechanics of picture-taking such as exposure, lighting, focus, and depth of field. They pair one select lens to a sophisticated camera and meticulously adjust it for shutter speed, aperture size, and so forth. Similarly, our eyes have highly engineered components analogous to the camera’s. However, our eyes are more like today’s user-friendly preprogrammed cameras in that our eyes self-adjust. This enables us to swiftly scan a group of friends posing in front of the Teton Mountains and appreciate both near and far details. What parts help make our eyes so versatile?

When we stare closely into someone’s eyes, the clear bulging structure covering about two thirds of the visible eyeball is the cornea. Most people may be surprised to know that our cornea, rather than our lens, is responsible for approximately 70% of light focus. A healthy cornea is similar to very fine, highly polished, optical-grade glass whose extreme smoothness and clarity enable distortion-free light to pass through it. We sense distortion when we look through the lesser-quality glass of a windshield or window and perceive, for example, bent or broken-appearing telephone poles.

The cornea’s special material properties are formed by a combination of numerous smaller parts. The general protein fiber, called a fibril, that underlies a good portion of skin and bone is collagen. Collagen also makes up most of the human cornea. Throughout its composition, very specifically arranged fibrils allow the cornea’s exceptional transparency. A cornea is only about as thick as six sheets of printer paper, but within that space are around 200 closely compacted layers of collagen fibrils with only the smallest amount of fluid between them. This dense, nearly dehydrated condition is made possible by a layer of cells on the inner side of the cornea. These cells actually possess pumps capable of transferring sodium ions out of the cornea. By pumping one ion out, a water molecule follows. This pumping action maintains the spacing of the fibrils at just the right distance so that light scattered by one fibril cancels out the scattered light of adjacent fibrils. Damage or disease to the critical inner cells causes fluid to accumulate between cornea fibrils, making the cornea blindingly opaque.

The outer layer of cornea cells are on the front line between the eye and a hostile world of dirt, sand, and even eyelashes. These contaminants could not only cut the cornea but could also abrade it so severely with blinking that blindness could result if the damage is left unattended. So, one smart way to make sure people don’t ignore care for their eyes is to invest the outer layer of the cornea with so many sensory nerves that even small specks of dust are intensely painful. Corneas are likely the most pain-sensitive tissues in the body, with sensory innervation over 400 times greater than that of most skin and even dozens of times more sensitive than our teeth or fingertips. 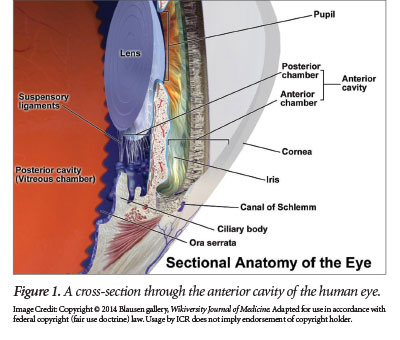 Behind the cornea, as pictured in Figure 1, is the intensely colored iris. Purposed just like a camera’s aperture, it adjusts the amount of light entering the eye through its round central opening—our pupil. The iris is designed to be opaque to light transmission. Multiple layers of tissue are intensely infiltrated with the same light-blocking protein melanin used to color our skin. Our eye color results from the outer layer’s varying amounts and mixtures of one melanin type that absorbs most light and looks brown and black, or another type that reflects reds and yellows. The inner layers have only brown and black melanin.

The iris functions as a round curtain of tissue that dynamically opens and closes around a central hole. One elegant design secures that function by arranging two intrinsic muscles working in opposition to each other. A very small circular constrictor muscle is located just at the iris-pupillary margin. When its nerve becomes excited it constricts, resulting in a smaller circumference that closes the pupil. A series of muscles radiating away from the constrictor muscle—just like spokes on a bicycle wheel radiating away from the hub and toward the rim—serve to open, i.e., dilate, the pupil when they are excited. Both are under very elaborate neurological control to confer the rapid and exquisite manipulation of the pupillary opening. Because physicians can readily see pupillary responses to light, atypical responses may give clues as to the location of a vascular or neurological abnormality in the brain or head.

The lens is centered perfectly in line with the visual axis and suspended directly behind the pupil. The cornea and man-made lenses both have a fixed focus; however, the power of the eye’s lens is adjustable in order to focus light exactly on the retina. Amazingly, the shape of the lens itself can be quickly changed from a large-diameter, discus-like shape for distance vision to a smaller-diameter, more powerful oval shape for near vision. A key component of the lens is a tough outer capsule that is filled with individual and precisely regimented proteins called crystallins. Crystallins align with each other by a flexible joint enabling them to conform to different shapes. A circular muscular element, part of the ciliary body, surrounds the lens. Hundreds of suspensory ligaments attach the lens to the capsule in a way very similar to how springs connect a circular trampoline fabric to its frame—except it is the muscle and not springs that changes shape. When we want to see something close, the muscle constricts and releases tension on the capsule so that it can bulge in the center. Just like an auto-focusing camera must have incredible programming—with sensors, feedback loops, and focus-adjustment actuators—our eye-brain combination fulfills the same function but in a much more elaborate and orchestrated way.

Remarkably, this is actually an extremely simplified description of these three components of our eye. The full anatomical and biochemical details are staggering in their complexity. Some human-engineered camera systems are technological marvels, but the ability of our eyes is exceedingly greater. That comparison helps us understand why the implied answer to God’s rhetorical question in Isaiah 40:25—“To whom then will you liken Me, or to whom shall I be equal?”—is emphatically…no one.