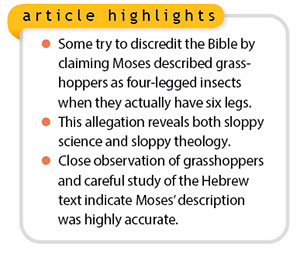 After spying in Canaan, 10 Hebrew scouts fearfully reported, “We saw the giants…and we were [by comparison] like grasshoppers” (Numbers 13:33). Like the cowardly spies, grasshoppers are easily frightened.

As their name suggests, grasshoppers hop hastily in grasses whenever they fear potential predators.1 But no one should fear what people say when the Bible talks about grasshoppers, although a college freshman once expressed nervousness because someone told him that Scripture describes grasshoppers as “four-legged” insects, but all grasshoppers have six legs!2,3

Did Moses get it wrong in Leviticus 11:20-24? Should the freshman be intimidated by Bible-bashing critics and evasively flee scientific topics just as the trepid grasshopper leaps to escape predators?

The secular world blasts and bombards students everywhere—as it does all of us—with the false claim that science (an all-too-often-misrepresented term) somehow proves the holy Bible is unreliable on scientific topics. Trumpeting such disparagements, secular platforms taunt Bible believers.2 No surprise there—this is what Peter and Paul predicted: “scoffing” by ungodly unbelievers (2 Peter 3:3) and “science falsely so called” (1 Timothy 6:20, KJV).

But how do you face and fend off pseudo-intellectual bluff-and-bluster bullying? By carefully studying what God actually said in Scripture (Acts 17:11). So-called clashes between Scripture and science routinely reduce to sloppy science, sloppy theology, or both.4

Misreporting grasshoppers, in this case, doubly exhibits the oversimplification fallacy, illustrating both sloppy science and sloppy theology.2,4,5 It’s sloppy science to suggest that grasshoppers, as six-legged insects, walk about (or creep) on six feet—they do not. Like airplanes in flight holding their wheels upright, grasshoppers hold their two hind legs upright when walking.5

However, when springing into a leap, grasshoppers powerfully unleash their hind legs, then powerfully push off from a substrate (e.g., ground, grass), similar to swimmers pushing off from swimming pool walls and launching into catapult jumps to land at multimeter distances (up to 100 times longer than grasshopper body lengths). This requires bursts of both might and acceleration at the same time. However, muscular motions usually activate either high-power movements or high-speed movements, not both.5

Yet, God designed grasshoppers to do both simultaneously!

Grasshoppers exhibit catapult mechanism to expand the mechanical power generated by its muscle.…Grasshoppers are wonderful creatures…[that] can instantly accelerate to a high velocity through contraction of the muscles and relaxation releasing the energy stored.5

Meanwhile, it’s likewise sloppy theology to suggest that Moses ever called grasshoppers four-legged insects, because he described these crawling-and-jumping creatures literally as “walking upon four” (hōlēk ‘al ’arba‘ in Leviticus 11:21a), with “benders from over/above its feet, for to leap by them” (kerâ‘îm mimma‘al leraglâîw lenattēr bâhēn in Leviticus 11:21b). Moses knew that grasshoppers walk on four feet (two forelegs, two mid-legs). He also recognized that grasshoppers use contracted bending/springing legs (two hind legs) positioned above the walking legs for catapult-like leaping.

So, jumping to oversimplifications is neither good science nor good theology. Moses had it right all along—no surprise there (John 5:44-47).