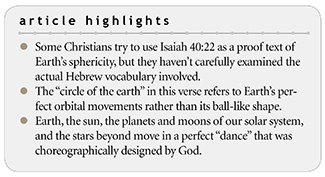 Some creation scientists suggest that “circle” in Isaiah 40:22 refers to Earth’s spherical shape.1 However, just because Earth is round like a ball, is that what the phrase “circle of the earth” means in this verse? Actually, no. This illustrates a larger problem within creation apologetics—namely, proof texts misused in an attempt to match Bible verses to scientific facts. We don’t need to do this, since there are plenty of texts that do match science.

In short, our understanding of the Bible, as well as of scientific matters, does not benefit from superficial yet flawed use of proof texts. Rather, careful analysis of biblical text details will provide, in the long run, more thorough and reliable understandings of both Scripture and relevant creation-related topics.

Careful analysis of biblical text details will provide, in the long run, more thorough and reliable understandings of both Scripture and relevant creation-related topics.

Let’s see how this applies to Isaiah 40. Biblical scholars generally use the noun “ball” to translate the Hebrew noun dûr in Isaiah 22:18: “He will…toss you like a ball.” If God had wanted Isaiah to describe Earth as a globe (i.e., a ball) in 40:22, why not have him again use dûr?2 This vocabulary difference was noticed by the English Bible translators in 1611, as a comparison of Isaiah 22:18 (“ball”) and Isaiah 40:22 (“circle”) in the King James Version shows.3 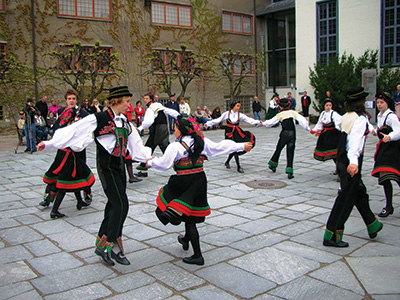 Even more importantly, to understand this word in Isaiah 40:22, the key issue is what the Hebrew noun chûg (“circle”) means. To find this out, we should compare Scripture with Scripture. In other words, we review how Scripture itself uses that and other Hebrew words sharing the same root.1,2 The Hebrew noun chûg is used only two other times in the Old Testament.

“When He prepared the heavens, I was there, when He drew a circle [chûg] on the face of the deep.” (Proverbs 8:27)

Are these circles spherical balls, or is Scripture referring to heavenly circuit-like motions?2,3 A related Hebrew verb appears in Job 26:10 describing Earth’s water cycle dynamics. The idea is circuitous movement, not sphericity.

Dancing? Do the concepts of celebratory feasts—or dancing—fit the idea of Earth’s roundness? Or do dancing and cyclical celebrations better compare with Earth’s artistically maneuvered orbital motions while circling the sun within our solar system, which itself orbits within the Milky Way galaxy?1,2,4

The popular assumption that Isaiah 40:22 refers to Earth’s round shape clashes with how God chose to use the noun chûg and related Hebrew words within Old Testament passages. Therefore, the best English word to portray what God was describing about planet Earth in Isaiah 40:22 is choreography—an amazingly well-ordered, orchestrated, festive, happy, and harmonious dance.