Salamander-like footprints preserved in sandstone have long fascinated Grand Canyon hikers and rafters. Insights from a new study of the track patterns intensify an old trackway mystery. But Noah’s Flood can help solve this mystery.

It boils down to this: How could a four-footed track maker leave so many details of its foot if it was walking on windblown sand dunes? Footprints in dry sand leave shapeless divots that might not last a single day, let alone long enough to turn to stone. Wet sand grains, however, can hold together well enough to record details like toes.

Why does this matter? Uniformitarian geologists accept that all the rock layers exposed in Grand Canyon share watery origins—except the Coconino sandstone that preserves the reptilian tracks. They question how the Flood could explain windblown rocks. Creation geologist Steve Austin asked it this way in 1994: “How could there have been a period of dry, desert conditions in the middle of the Flood year, when ‘all the high hills that were under the whole heaven, were covered’ (Genesis 7:19) by water?”1

Anyone who admits that the Coconino sand dunes were actually deposited by fast-flowing water opens the possibility for watery origins for all the Grand Canyon layers. And that would leave Noah’s Flood very much afloat.

When I photographed the Grand Canyon’s Coconino reptile tracks beside the Colorado River, living chuckwalla lizard tracks in nearby dry sand dunes provided a convenient comparison. The chuckwallas left tail drags and featureless foot divots, but no toe prints. The Coconino tracks show toes in what must have been wet sand just before the grains cemented together and became sandstone.

The idea that a four-legged creature made these Coconino tracks in wet sand did not start with me. Published experiments confirm that salamander tracks made in underwater sand slopes most closely match the Coconino tracks.2

University of Nevada, Las Vegas (UNLV) geology professor Stephen Rowland presented initial results of his new analysis of the Coconino Sandstone tracks at the 2018 Society of Vertebrate Paleontology Annual Meeting in Albuquerque, New Mexico. He noticed that the lizard was not walking straight up the sand dune, but instead sidestepped its way up. Was something pushing it sideways as it tried to walk?

Rowland told UNLV news, “One reason I’ve proposed is that the animal was walking in a very strong wind, and the wind was blowing it sideways.”3

Really? How in the world could a wind strong enough to shove a lizard sideways fail to obliterate that same lizard’s footprints in the dry sand it climbed? 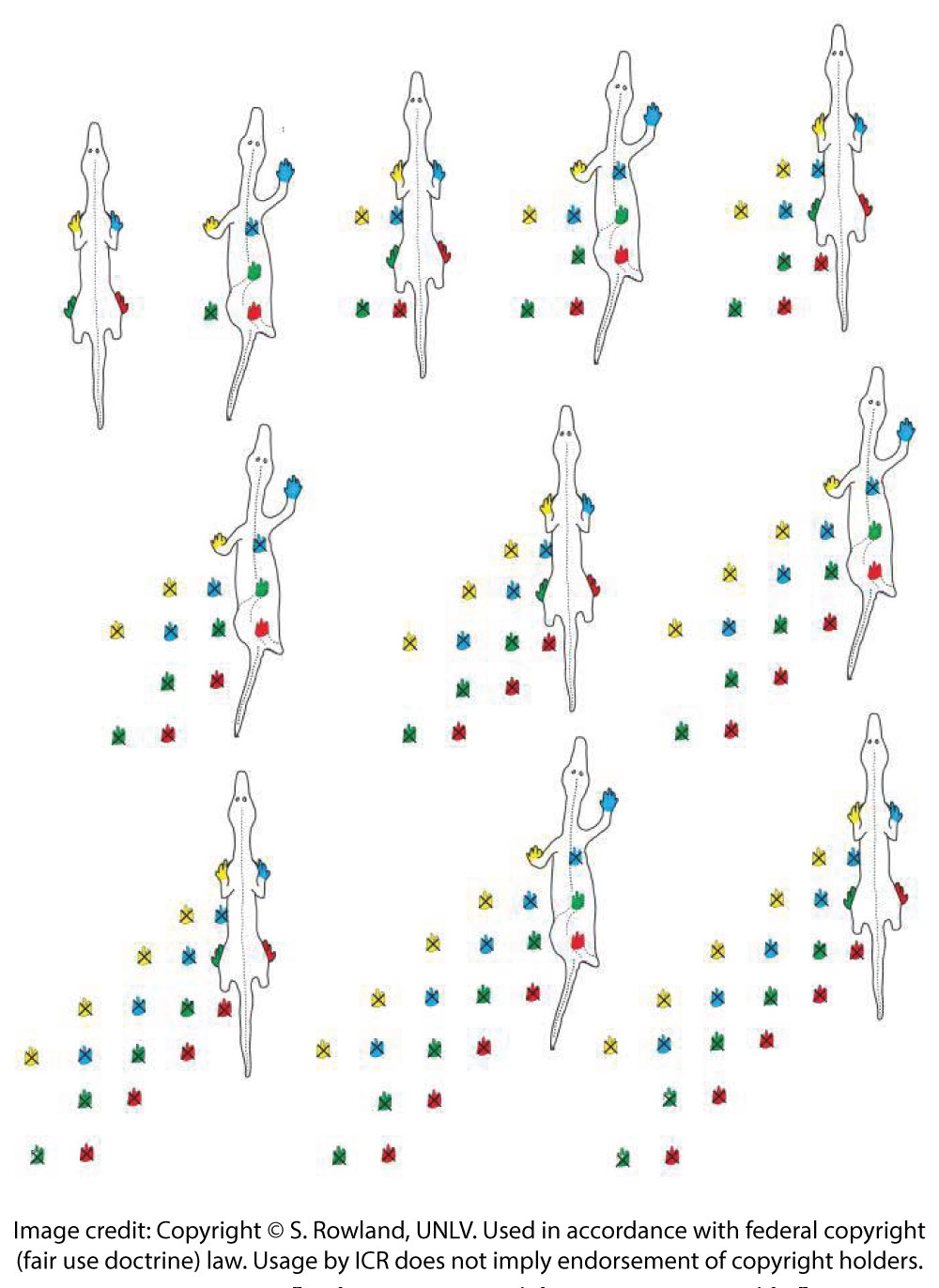 Rowland indicated two other possibilities. Maybe the lizard slid sideways because the dune was too steep. If so, why doesn’t the sandstone show smeared tracks from the creature sliding downhill instead of the discrete footprints shown? Or, maybe it was dancing in a mating ritual. Except that it takes two to tango, and the slabs show no nearby dance partners.

Water deposited the Coconino, not wind.4 The same water that helped sand grains preserve Permian toes would have pushed the little animals sideways as they struggled upward. Again, that’s not just my idea—it was published in the secular journal Geology back in 1991.5 Why would Rowland, a geologist, completely ignore what his own discipline’s top journal says about the Coconino tracks?

Noah’s Flood solves the mystery of the Coconino tracks.