What happened on the earth to trap these animals and plants in single layers of sediment that sprawl from Idaho to Texas? Some explanations fit these facts better than others. 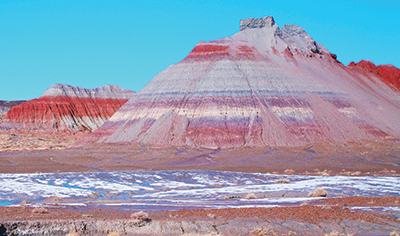 The Chinle Formation placed in the early phases of the Flood (Upper Triassic) contains the many petrified trees in the park. It extends from Wyoming to Texas and from Oklahoma to Nevada.2 Dawn of the Dinosaurs says this area formed when “energetic, sediment-rich rivers moved across the region.”2 What about burying big amphibians? The book explains that perhaps “a river seasonally flooded over its banks.”3

But today’s seasonal floods don’t result in fossils, so why should we believe they did so in the past? We would need massive sheets of water, not little rivers, to make the colorful layers that blanket such enormous regions. 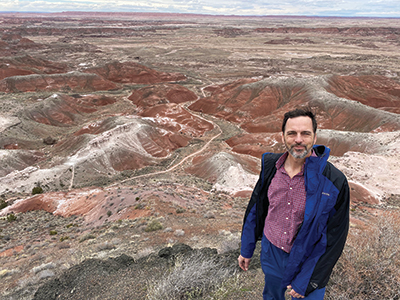 Secular geologists recognize sheet erosion, a process the book doesn’t mention.4 Enough water can clear everything in its path. At the Painted Desert, fluid has carried and buried sediment and creatures across a vast, flat area (Figure 2). In contrast, rivers stay near their channels. Look at how the rocks in the park extend continuously for hundreds of square miles without clear river channels. Do some uniformitarian geologists misidentify sheet flow features as ancient rivers? The same rock layers seen at the Painted Desert and far beyond Arizona demand unimaginably more floodwater and force than regular rivers can deliver.

New Mexico’s Ghost Ranch, north of Santa Fe, exposes more of the same sediments. There, dinosaurs and other fossils (Figure 3) pooled in place “after floods.”5 Certain Ghost Ranch quarries contain hundreds of Coelophysis dinosaur skeletons that “look as if they were deposited in a single event, probably a massive flood.”6 It’s hard to envision the colossal scale and depth of water these deposits imply. 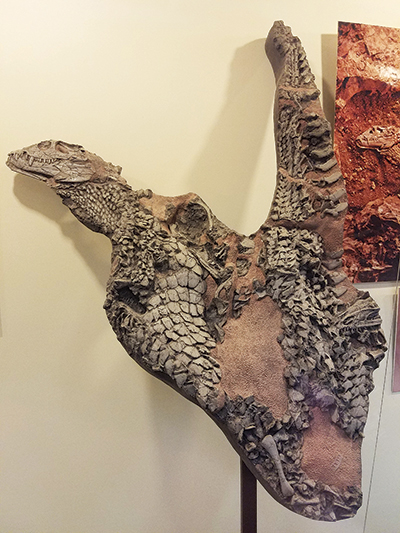 Typical tales tell of ancient soils that accumulated on river floodplains to explain colorful banded layers visible across the Painted Desert.3 However, these look nothing like soil horizons we see today. Real soil profiles reveal roots and a gradual increase in organic material toward the top. The Painted Desert’s distinct, not gradual, layers lie continuous for miles in all directions.

The Chinle Formation’s Blue Mesa Member has world-famous petrified tree trunks up to 180 feet long. The once-low-lying area “was flooded at some point, drowning the trees.”2 But the simple drowning of trees doesn’t break trunks off their roots. Petrified trees in the Painted Desert rarely have roots (Figure 4). Silica-rich (quartz) minerals from widespread volcanic activity helped petrify them.

What force could have sheared trees at ground level, ripped off all their limbs, and buried the logs in sediment? Forty years ago, in mere minutes the main Mount St. Helens volcanic explosion stripped thousands of tree trunks of bark, roots, and branches. When massive tsunami waves come onshore, they also shear off vegetation en masse. Much bigger volcanic blasts and tsunami waves that occurred during the Flood year help explain the Painted Desert’s petrified trees. 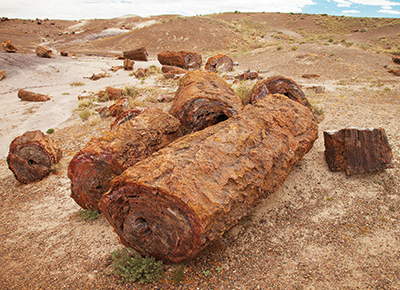 Figure 4. The fossil trees got their color from quartz-rich ground water percolating through volcanic ash. This process replaced much of the original wood with quartz and agate. Impurities like iron, copper, and carbon made the beautiful mixtures of yellow, red, green, blue, and the black hues.

One also expects a worldwide watery catastrophe to mix land and sea creatures, and that’s what these rocks show. Dawn of the Dinosaurs says, “The Blue Mesa Member preserves a variety of aquatic and terrestrial creatures,”7 and the same words apply to other formation members. Table 1 shows fossil animals and plants from mixed environments in the Chinle Formation.

Fossils include mammals; reptiles like turtles, lizards, dinosaurs, and crocodilians; frogs; and birds.8 Shark and coelacanth fossils show up too. Coelacanths live today at about 500 feet or more deep in the sea.9 Most sharks are also marine. It takes a cataclysm to slam ocean onto land. 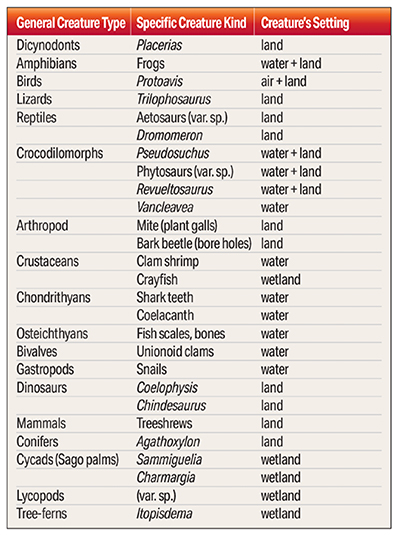 Table 1. Plant and animal fossils in the Chinle Formation and its equivalents

Key Lessons from the Painted Desert

ICR’s scientists interpret the geologic layers exposed in the Painted Desert as major episodes of the rising waters during Noah’s global Flood. The Absaroka Megasequence of rock layers looks similar on all of Earth’s continents.10 During this phase, waters flooded broad pre-Flood lowlands and coastal regions. Tsunami-like waves carried in marine animals like coelacanths and sharks and mixed them with wetland animals like crocodilians. Every continent has land and marine fossils buried together—powerful evidence for the global Flood.11,12

River systems and soils today look nothing like the Painted Desert’s rocks and fossils. The enormity of the Flood explains the wide spread of each rock layer. Volcanic eruptions during the Flood contributed ash and silica to petrify violently buried trees. Draining floodwaters carved the landforms. Since the Flood explains the Painted Desert’s main features, this park in Arizona paints a picture of the reliability of Genesis.