Was Leviathan Real? | The Institute for Creation Research
Skip to main content

Scripture describes leviathan as a titanic terror roaming the ancient seas. Was it real, and if so, what was it? Historical hints help answer these questions.

The most complete description of leviathan comes from Job 41 and includes these observations: It lived in the sea but sometimes came on shore, had a scaly hide that deflected spears, was huge and terrifying, breathed fire, left luminescent wakes, and had a neck, nose, and a mouth with terrorizing teeth. From Psalm 104 we learn that leviathan played around in ancient shipping lanes.1

These historical hints from the Bible refute the idea that leviathan was a mythical creature that was being used as a literary metaphor. Metaphors don’t deflect spears or scare the daylights out of onlookers. In fact, leviathan must have really done these things for God to meaningfully compare it to His own might. Identifying leviathan as a myth smuggles in the destructive idea that anything in Scripture could be interpreted as a myth. But since the Bible has proven itself true over centuries of scrutiny, the leviathan must have really lived.

Some Bible translation notes and even conservative commentaries identify leviathan as a crocodile. While crocodiles do match several of leviathan’s attributes, they fall short of disrupting shipping lanes, breathing fire, generating luminescent wakes, being utterly unapproachable, and having impenetrable hides.

Since neither myth nor croc satisfies the Bible’s specific description, could leviathan have been a creature that is now extinct? Creation scientists have searched for fossils that match leviathan but without much success. Ichthyosaurs looked like dolphins—too small for leviathan. Mosasaurs had huge toothy mouths and were 45 feet long, but their fossils don’t indicate much of a neck. And could their flippers have pulled their streamlined bodies onto shore like a leviathan? Plesiosaurs might have been large enough, and they had necks and nostrils, but their heads seem too small to convey the awe that leviathan’s head did. Some suggest leviathan was like the super-croc Sarcosuchus. Perhaps so, but many remain unconvinced. Maybe no fossils of the created leviathan kind have yet been described. 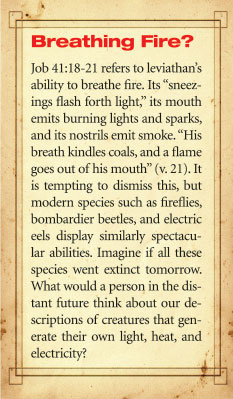 However, leviathan bones may have been on display in ancient Rome. In his book The Authenticity of the Book of Jonah, historian Bill Cooper relayed a passage from Pliny the Elder’s Natural History:

The bones of this monster, to which Andromeda was said to have been exposed, were brought by Marcus Scaurus from Joppa in Judaea during his aedileship and shown at Rome among the rest of the amazing items displayed. The monster was over forty feet long, and the height of its ribs was greater than that of Indian elephants, while its spine was 1-1/2 feet thick.2

Marcus Scaurus transported and displayed the bones in Rome’s largest theatre around 64 B.C. Cooper also relates Pliny’s note of a washed-up carcass with 120 teeth, each between 9 and 6 inches long, and Pausanius’ mention of “an enormous sea monster’s skull which was kept at a sanctuary in Asklepios.”3 Many other accounts, plus paintings and carvings, convey encounters with monstrous marine reptiles.

What was leviathan? Unfortunately, no living or fossil example seems to provide an exact match, but hints from history support the accuracy of Scripture’s leviathan.

ACTS & FACTS
Refusing to Live by Lies
Perhaps my parents were naïve. They raised me to respect my teachers, the government, and other authorities, and to believe these entities acted...
BY: RANDY J. GULIUZZA, P.E., M.D.