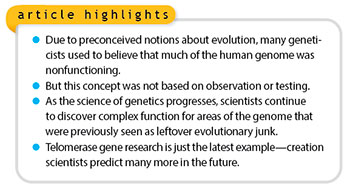 For decades, evolutionists suggested that huge sections of our genome (about half) did not actively code for the production of proteins or polypeptides—and so were useless, or “junk DNA.” But unsurprisingly, further research has uncovered functions for these “worthless” DNA sequences.1 One creation scientist stated:

To conclude that a DNA sequence has no function (i.e., that it is “flotsam and jetsam” or “junk”), a scientist must have tested every base pair (the four DNA base pairs are A, T, G, and C) in the human genome (the totality of our DNA sequence) for function. This is an impossible task.2

Jiyue Zhu is a leading researcher at Washington State University whose team just published an important paper related to the issue of junk DNA.3 Zhu is an authority on the process of aging and recently said:

These DNA sequences tend to be considered as “junk DNA” or dark matters in our genome, and they are difficult to study. Our study describes that one of those units actually has a function in that it enhances the activity of the telomerase gene.4

Telomeres are large parts of DNA that average anywhere between 5,000 to 15,000 bases long in the human genome.5,6 (Bases are like the letters of the genetic code.)

The telomerase gene controls the activity of the telomerase enzyme, which helps produce telomeres, the caps at the end of each strand of DNA that protect the chromosomes within our cells. In normal cells, the length of telomeres gets a little bit shorter every time cells duplicate their DNA before they divide. When telomeres get too short, cells can no longer reproduce, causing them to age and die.4

Zhu and his team have been studying a DNA region previously deemed “junk” called VNTR2-1. Its function seems to drive the activity of the telomerase gene. This is interesting because it is this sequence that prevents aging in certain types of cells and might help us understand how cancer occurs.

Because of this, it was thought that if a person had long telomeres then their aging was slowed down and they’d live longer. But this was found to be overly simplistic.

Zhu said it was worth noting that having a shorter [telomere] sequence does not necessarily mean your lifespan will be shorter, because it means the telomerase gene is less active and your telomere length may be shorter, which could make you less likely to develop cancer.4

Further research is pending. Regardless, as predicted by creationists, “the false evolutionary paradigm of ‘junk DNA’ has been utterly debunked in favor of a new model, one containing pervasive functionality and network complexity. The reality of this seemingly unending complexity is only just beginning to be revealed—an inconvenient fact that points directly to an omnipotent Creator.”7