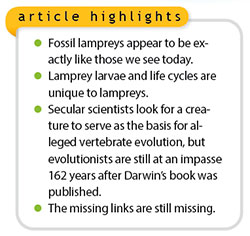 In 1859, the Western world was turned upside down by the publication of Charles Darwin’s The Origin of Species by Means of Natural Selection or the Preservation of Favoured Races in the Struggle for Life. Ironically, one thing Darwin never actually addressed in this difficult tome was the origin of the world’s species. For example, he didn’t address the origin of the vertebrates—animals with a brain and spinal column—or any other group of creatures. He only speculated.

In the 21st century, the origin of vertebrates continues to be an enigma to evolutionists. Considering the lamprey, evolutionists generally maintain that “modern lampreys are a holdover from the distant past, resembling the ancestors of all living vertebrates, including ourselves.”1 Nature magazine recently stated that the larva of the lamprey (ammocoete) “appears to recapitulate [repeat] widely accepted scenarios of vertebrate origin. However, no direct evidence has validated the evolutionary antiquity of ammocoetes, and their status as models of primitive vertebrate anatomy is uncertain.”2

Lampreys (order Petromyzontiformes) are a unique fish without jaws, scales, or paired fins. Their mouths are heavily toothed and funnel-like, used to bore into the flesh of fish to extract body fluids. The fossil record shows, unsurprisingly, that lampreys have always been lampreys and have remained “almost unchanged throughout the past 360 million years,” according to evolutionary dating.3 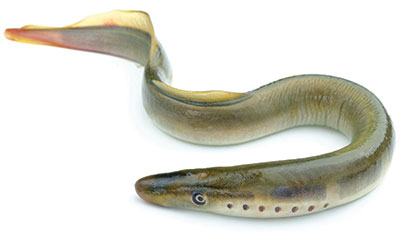 But the ancestry of vertebrates tracing back to lampreys has fallen upon hard times with recent fossil discoveries strongly showing “ammocoetes are specializations of modern-lamprey life history rather than relics of vertebrate ancestry.”2

In other words, the now complete fossil record of the lamprey life cycle doesn’t show any of the alleged evolutionary recapitulation that secular zoology predicted. What this means is lampreys have basically been removed “from the position of the ancestral condition of vertebrates.” Tetsuto Miyashita, a paleontologist at the Canadian Museum of Nature, went on to say, “So now we need an alternative.”1 Margaret Docker, “an expert on lamprey biology and genetics at the University of Manitoba, calls the findings ‘very exciting.’ She agrees that the fossils ‘rule out modern lampreys as a model for the earliest vertebrates.’”4

An unofficial rule of secular biology is that when someone uses the word “exciting,” it means they were wholly unprepared for such a discovery because their expectations were built on the theory of evolution. The findings raise two new questions for them: why did the lamprey evolve into such a confusing creature, and what did the earliest vertebrates actually look like?4

Creationists suggest lampreys are designed by the Creator, Jesus Christ, not to confuse the scientist but to inform the scientist about God’s glory.

With the elimination of lampreys from their ancestral position in the tree of life, evolutionists are back to square one when it comes to vertebrate origins. But because they will not accept the biblical narrative of living creatures reproducing “after their kind,” secular scientists must look for an alternative that, like the lamprey, will never be satisfactory to their reasonable mind.

Even so, they still try to make it work. They are now suggesting extinct armored fishes called ostracoderms as “the root of the vertebrate family tree.”1 But there are serious problems with this suggestion.5 For example, although lampreys have been removed as the claimed ancestor of vertebrates, the internal structures of the head of ostracoderms resemble those of living—you guessed it—lampreys.

All wisdom raised against God will prove futile. Yet evolutionists continue to search the sedimentary rocks for missing links that, per God’s Word, will never be found.

Mr. Sherwin is Research Associate at the Institute for Creation Research and earned his M.A. in zoology from the University of Northern Colorado.