A hand bone found in northern Kenya surprised researchers when it surfaced in rock layers assigned a supposed age of about 1.4 million years, making it the oldest dated human bone but still “young” enough to challenge its age assignment. If the secular community is correct in asserting that this discovery outdates the supposed earliest accepted human fossil by almost half a million years, then the find merely illustrates how human anatomy has resisted evolutionary changes for that long.1

Publishing in the Proceedings of the National Academy of Sciences (PNAS), the team described a human hand bone—a third metacarpal—matching the hand of an approximately 5-foot-10-inch tall male. They wrote, “In all ways, this bone resembles that of a modern human in overall proportions and morphology.”1

At issue for secularists is the occurrence of the now earliest human form, which they will need to somehow fold into their evolutionary narrative. The PNAS study authors referenced an earlier report of tool marks on bones dated to 3.39 million years ago, long before man’s uniquely tool-suited skeletal features supposedly evolved.1,2 This implies that the Kenyan hand bone, though the “oldest” human bone, is still not as old as the oldest evidence of hands at work.

“Now, researchers have discovered a fossil almost 1.5 million years old that possesses this vital anatomical feature [the styloid process], meaning it existed more than 500,000 years earlier than it was previously known to have existed,” according to LiveScience.3 Argon dating of nearby volcanic deposits called “tuff” ostensibly supports the hand bone’s age assignment of ~1.4 million years.4 However, bias has underpinned other uses of this technique, such as the application of argon “ages” to tuff deposits from Montana, despite the fact that argon dates never match known rock ages.5

Without a date stamp, this artifact’s age will remain vague, but the bone makes man’s unique design crystal clear. The PNAS authors listed these eight hand-anatomy details that man shares with no other creature and that help make both hard-pounding and precision-touch possible: 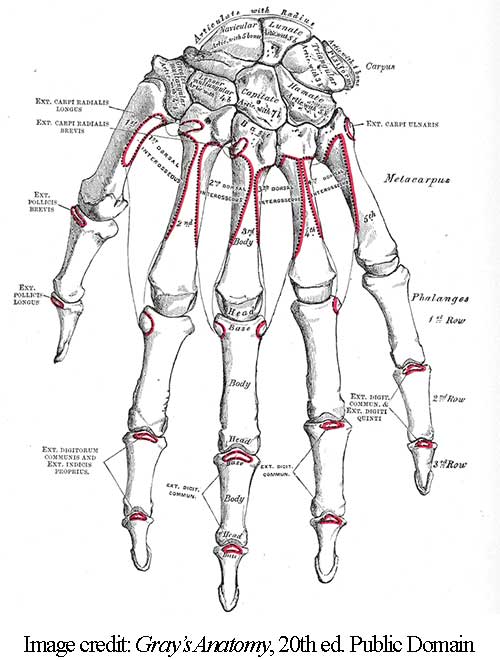 The researchers willingly admitted this metacarpal came from the body of an anatomical man, but secularists are much less eager to identify bones as human if they don’t align with evolution’s time frame. For example, in 2011 a different study group found a human foot bone dated to more than 3.0 million years ago. But because this age predated the supposed emergence of man—and in spite of the fact that the bone fits identically with human structure and not with known apes—they assigned it to an extinct ape’s body.7

Regardless of secularist’s disjointed dating differences, the most significant news from the latest hand-fossil find should be the simple fact that the oldest, widely recognized human hand bone shows no evolutionary change.8 This Kenyan fossil points to man originating…as man.