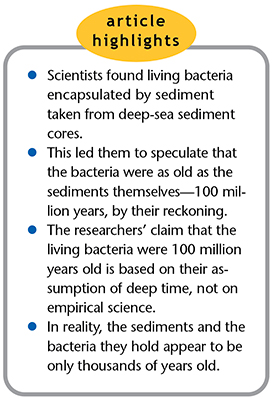 Evolutionary scientists recently claimed to have discovered bacteria that are 101.5 million years old. In 2010 researchers collected deep-sea sediment cores in the South Pacific as part of the Integrated Ocean Drilling Program, with the goal of examining seafloor life and habitability in one of the lowest-productive ocean areas. Sediment samples used in the analysis were taken from depths of up to 75 meters below the seafloor at several sites in water between 3,700 and 5,700 meters (12,100 to 18,700 feet) deep.1

Publishing in Nature Communications, Yuki Morono of the Kochi Institute for Core Sample Research, Japan Agency for Marine-Earth Science and Technology, and his colleagues added a special blend of nutrients to nearly 7,000 individual bacteria collected from the sediments. This food source contained a unique mix of carbon and nitrogen isotopes that allowed scientists to see if the bacteria were actively feeding.1 Co-author Steven D’Hondt, a University of Rhode Island oceanographer, said of the bacteria, “We didn’t know whether we had fully functioning cells or zombies capable of doing very few things.”2

Within 68 days, the distinctive tracer isotopes began showing up in the bacteria cultures, indicating the bacteria were feeding on the nutrients. The bacteria also reproduced, “increasing total numbers by four orders of magnitude” during the study.1

The scientists found this truly amazing since the bacteria had been taken from mud trapped between layers of impermeable porcellanite, a microcrystalline variety of quartz that no microbe could penetrate.1,2 This led the study’s authors to suggest the microbes could be as old as the sediments they were found in, essentially having been trapped in a time capsule. Colin Barras of NewScientist observed:

Many biologists are unsettled by the idea that individual bacterial cells could survive for 100 million years. There have been a handful of claims for even older microbes on Earth. One team claimed in 2000 to have resurrected microbes trapped inside 250-million-year-old salt crystals, but some researchers suspect that the microbes were seen as a result of sample contamination, which is unlikely to be the case in the new study.2

Claiming that bacteria can survive trapped in sediment for over 100 million years seems like science fiction. And yet, scientists have found cells, proteins, and flexible blood vessels in dinosaurs and other animals dated by secular scientists at 66 to over 500 million years.3 These discoveries question the great ages assigned to these creatures and instead suggest these fossils are just thousands of years old.

In light of these other fossil discoveries, there appear to be two possible solutions for these deep-sea bacteria: 1) the bacteria were not trapped for 101.5 million years, suggesting that there were fractures or conduits in the porcellanite that allowed bacteria to migrate in at a more recent date; or 2) these sediments and the bacteria found in them are not really millions of years old.

Either one of these scenarios better explains the presence of living bacteria in deep-ocean sediments compared to the tale spun by secular scientists. However, the earlier discoveries of so many original proteins and cells found in so-called ancient rocks makes solution number two the most likely one.

These bacteria, if indeed trapped in sediment at the time of deposition, are only thousands of years old. The ocean sediments, and possibly the bacteria too, were deposited during the global Flood described in Genesis. Claiming these bacteria are over 100 million years old is not based on empirical science but on a secular, deep-time worldview.