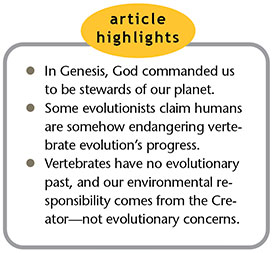 God gave humans a dominion mandate1 and expects us to exercise responsible stewardship “over all the earth.”2 After the Flood, God reaffirmed the mandate in Genesis 9:1-10.

You are alone on your branch of the evolutionary tree of life. Aardvarks, crocodiles, and kiwis were all separated from their closest evolutionary relatives tens of millions of years ago and bear a unique evolutionary history.3

The fossil record shows that aardvarks, crocodiles, and kiwis have always been aardvarks, crocodiles, and kiwis. However, “phylogenetic [evolutionary] relationships among the animal phyla are very difficult ones to resolve.”5 Their “closest evolutionary relatives” are unknown, conveniently existing tens of millions of years ago. A couple of evolutionists have clearly stated the problems:

Faced with these intrinsic obstacles and with little evidence from the fossil record to help, it is hardly surprising that disagreement over the origin of chordates [a large phylum containing all vertebrates] has been common.6

The emergence of gnathostomes [a superclass of the above-mentioned vertebrates] from jawless vertebrates marks a major event in the evolution of vertebrates. This transition was accompanied by many morphological and phenotypic innovations....How these novelties emerged and how they facilitated the divergence, adaptation and dominance of gnathostomes as the major group (99.9%) of living vertebrates are key unresolved questions.7

Vertebrates have no deep evolutionary past. The article addresses the threat to the world’s animals—a valid concern—but corrupts the issue unnecessarily with the unobserved process of vertebrate evolution and deep evolutionary time. “Using extinction-risk data for around 25,000 species, the researchers found at least 50 billion years of evolutionary heritage to be under threat.”3

The article also states, “The researchers found that regions under high human pressure coincided with those containing irreplaceable reptilian diversity.”3 It cryptically addressed “high human pressure” but didn’t mention, for example, that huge amounts of lava can release as much CO2 as mankind will produce for the entire 21st century.8

Paul tells us to worship the Creator and not the creation, warning against those “who exchanged the truth of God for a lie, and worshipped and served the creature rather than the Creator, who is blessed forever. Amen.”9 One does not have to bring up unknown and unobserved vertebrate evolution and its extreme ages in order to exercise care for the created environment and the animals it contains.