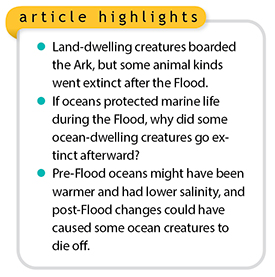 Genesis describes a one-time global catastrophe that completely inundated the world, destroying all air-breathing land animals. God made provision through Noah and the Ark to preserve all dry-land creature kinds during this tumultuous judgment. Genesis 6:20 tells us, “Of the birds after their kind, of animals after their kind, and of every creeping thing of the earth after its kind, two of every kind will come to you to keep them alive.” Clearly, two of every kind of land animal were taken on the Ark. But did God make any special provision for the ocean life?

Paleontologists have found many extinct forms of life fossilized in the rock strata—virtually all of them buried during the Flood. Some of these animals went extinct over many centuries after getting off the Ark, including the land-dwelling dinosaurs.1 But what about marine reptiles like ichthyosaurs, mosasaurs, and plesiosaurs? They weren’t on the Ark, and yet they also disappear in the rocks near the top of the Mesozoic, just like the Flood-fossilized dinosaurs do. Did these marine reptiles survive the Flood?

Then there are the many shallow marine forms of life that no longer populate today’s waters. There are trilobites, fusulinids, and rugose and tabulate corals, as well as many of the brachiopods and bryozoans.2 All of these animals disappear in the rock record near the end of the Paleozoic. There are also ammonoids, rudist clams, and even many planktonic formaminifera.2 These animals all vanish in the rocks near the end of the Mesozoic, just like some of the larger marine reptiles mentioned above. 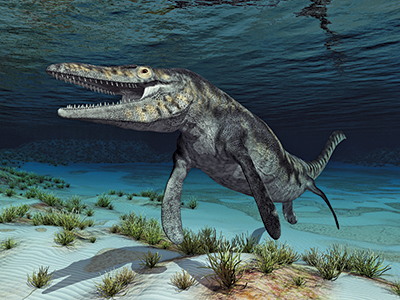 Were these disappearances caused by mass extinction events as secular scientists have proposed?2 It doesn’t appear so. These so-called extinctions are actually just the last appearance of a fossil in the rock record. The progressive destruction and burial of pre-Flood biomes likely formed many marine fossils, just like the land animals entombed later. Higher water levels would naturally destroy higher ecological zones and produce distinctive fossils. This was most likely true for the oceans as well. The earliest floodwaters would have buried marine life in the lowest elevations of the shallow seas, like many trilobites and brachiopods. But why don’t we see these same animals alive today?

Stromatolites, a form of algal deposit, are fairly common fossils in pre-Flood sedimentary rocks. Up until 1956, scientists believed they were extinct. But today they are found in a couple of places in the world—in areas that have a special water chemistry.3 It’s likely that shallow marine animals like trilobites, brachiopods, and rugose and tabulate corals also required an environment with a vastly different water chemistry—environments that were completely destroyed in the Flood.3 With their natural environment destroyed, many of the animals that inhabited these shallow seas went extinct.

Larger marine reptiles—like ichthyosaurs, mosasaurs, plesiosaurs, and the free-swimming ammonites—may have required large areas of warmer ocean water than we find today. It’s also possible they required lower salinity in their water. It seems reasonable to conclude that the pre-Flood oceans had lower salinity levels than modern ocean water.3 Post-Flood changes in temperature and salinity may have adversely affected some marine animals and ultimately caused their extinction, just like changes in climate after the Flood likely caused the dinosaurs to slowly die off.1

God preserved many life forms in the oceans. Many animals found refuge in the deeper water and were largely unaffected by the tsunami-like waves passing through. By His mercy, our oceans today are teeming with life. But the message of His wrath is still there for us to see. The many extinct marine animals, like the trilobites, should serve as reminders of the global Flood. Their fossils are evidence of a “world that then existed perished” (2 Peter 3:6), being completely destroyed by a watery judgment.