Hopefully you’ve been able to take some time off this summer for a much-needed vacation or at least a little break from your busy schedule. I just returned from Caddo Lake in Texas, where ICR’s DVD production team filmed some incredible scenes for our upcoming dinosaur series. (We’ll share more in the upcoming months—you can look for details in the fall.) While it wasn’t a vacation, it provided a nice change of pace from my normal work routine. 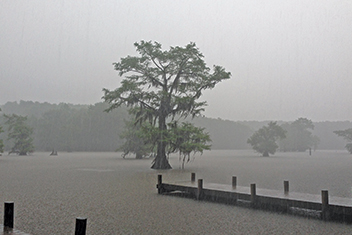 One day, the film crew piled into boats early in the morning and spent much of the day chasing down the perfect shot with just the right lighting on the beautiful water lilies, ethereal Spanish moss, and majestic cypress trees. Near the end of the day as the director called it a wrap, huge, dark clouds rolled in. We made it to the dock as raindrops began to pound the wooden planks. Most of our group hurried off to their rooms, but I stayed behind, watching the storm, mesmerized by the rhythm of the rain on the boathouse roof and the swaying of the trees that dotted the lake. As I looked across the lake, my eyes zeroed in on a lone cypress tree in the middle of the water.

In that moment, God brought to my mind His words about the cypress tree. He called it a mighty tree (Zechariah 11:2). The temple contained cypress wood overlaid with fine gold (2 Chronicles 3:5). In the Song of Solomon, the bride points out to her husband that the rafters of their houses are made of fir (Song of Solomon 1:17; some Bible scholars think that the fir and the cypress were the same tree). And Isaiah referred to the cypress when he described the renewed earth our coming Lord will bring: “Instead of the thorn shall come up the cypress tree, and instead of the brier shall come up the myrtle tree; and it shall be to the LORD for a name, for an everlasting sign that shall not be cut off” (Isaiah 55:13). Referring to this passage, ICR founder Dr. Henry Morris says, “The thorns were manifestations of God’s great curse on earth because of man’s sin (Genesis 3:17), but the curse will finally be forever removed (Revelation 22:3).”1

In this issue of Acts & Facts, we’re reminded that Jesus Himself believed and taught a recent creation (pages 5-7). We also take a journey into the realm of the smallest things in the universe in the first in a series on subatomic particles—God’s building blocks (pages 10-13). These amazing particles not only demonstrate the intricate genius of our Creator but also provide a demonstration of His faithfulness in “upholding all things by the word of His power” (Hebrews 1:3).

The very tree that Isaiah talked about so many years ago continues to remind us of the faithfulness of God. Slow down long enough to enjoy His presence and the things He whispers to you in quiet moments. Remember that He stands beside you every moment of every day—He’s always there to turn to and is interested in every detail of your life. God is never in a rush. Take time to marvel over His creation and His words this summer.