Life Sciences Research: Year One in Review | The Institute for Creation Research
Skip to main content

The Institute for Creation Research announced its new research venture into the life sciences in April 2010. Since then, the research team has made significant progress investigating the outstanding biology questions at the cutting edge of the creation/evolution debate.

The ICR life sciences research program was initiated due to current gaps in science-based apologetic knowledge.1 These gaps have not been addressed by past ICR research, which focused primarily on geology. Filling this void is the goal of ICR origins biology research.

We have been tracking our progress in this undertaking via the diagram below, which we term the “Research Cascade.” We began this process by identifying key origins biology questions for which answers remain unknown.2-5 Since then, we have initiated Hebrew word studies,6 and have undertaken a review of the scientific literature—evolutionary and creationist—to narrow our focus to a few feasible research projects that will aid in addressing these questions.7 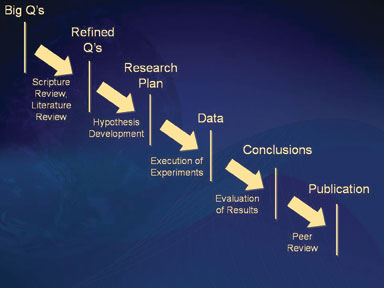 For example, the ultimate answer to most of our big questions appears to be hidden in the DNA and protein sequences of various creatures. We have been diligently studying related research papers and have even performed a number of our own biological sequence analyses of available data on computers in-house at ICR. These efforts support step two of the Research Cascade—producing more refined questions—and we anticipate arriving at this step in the next year or two, though this timeline is almost certain to change given the inherently uncertain nature of research investigations.

Given the calculated pace at which we have progressed in the Cascade, it should be apparent that research is a very protracted process. This stems from several factors. First, the enormity of the questions and the amount of data to analyze temper the speed with which we can pursue any one of them. Essentially, we are trying to replace the standard models of classification and genetic change with new paradigms; this is a large task.

Second, the labor force is small. Even if the “team” were expanded to include all full-time professional creation biologists outside of ICR, the size of this group still pales in comparison to the number of evolutionary labs dedicated to similar tasks. Third, we wish to use the precious funds of our donors most wisely. The path to research success is often littered with roadblocks and dead-ends, and we wish to diligently avoid them and take only those paths that yield apologetically useful answers. Hence, progress may appear somewhat slow, but it is proceeding at a steady pace.

In the next year, we plan to continue reviewing scientific literature and performing more bioinformatic analyses. Our initial results already look very promising. We anticipate creating a revised, more advanced research proposal by the end of 2012. Please keep us in your prayers as we seek the advancement of His kingdom through biblically based origins research.