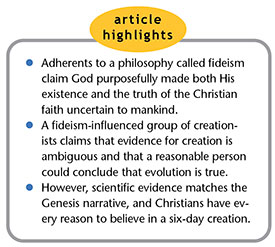 Is evidence for creation ambiguous? Could an honest seeker of truth reasonably conclude there is no God? Is the evolutionary old-earth story a reasonable inference from the scientific data?

The Institute for Creation Research would forcefully argue that the answer to these questions is no, but surprisingly some young-earth creationists claim otherwise. They have been called “young-earth evolutionists”1 (or YEEs) by their critics. This group is heavily influenced by a philosophy called fideism, which holds that it isn’t possible to make a truly logical or evidential case for the Christian faith.2

Fideists claim that true faith demands ambiguity.3 Although their reasoning isn’t always explicitly spelled out, they seem to think that ambiguity is necessary to preserve human free will. In other words, fideists would argue that God would not provide mankind with a self-evident case for His existence because that would rob people of the choice to accept or reject God’s love.

Advocates of this position also argue that God deliberately built ambiguity into His creation in order to show mercy to the rebellious. They reason that the condemnation of the unregenerate would be more severe if everyone knew there was a God, so He deliberately made the fact of His existence obscure or uncertain.4

Fideism is terrible theology. Regardless of where a Christian falls on the Calvinist-Arminian scale (the free-will-and-God’s-sovereignty spectrum), the Bible is adamant that God has not given us a choice when it comes to this fundamental knowledge concerning His existence. Romans 1:18-20 states:

For the wrath of God is revealed from heaven against all ungodliness and unrighteousness of men, who suppress the truth in unrighteousness, because what may be known of God is manifest in them, for God has shown it to them. For since the creation of the world His invisible attributes are clearly seen, being understood by the things that are made, even His eternal power and Godhead, so that they are without excuse.

Yes, people can choose to ignore or suppress their knowledge of God. But, like it or not, God has made this knowledge known to them, even to professing atheists. On the Great Day of Judgment, no mouth will “talk back” to God claiming He failed to make His existence sufficiently clear—“that every mouth may be stopped, and all the world may become guilty before God.”5

This passage also refutes the idea that God has veiled mankind’s knowledge of Him in order to protect humanity from judgment. In fact, it is precisely because “His invisible attributes are clearly seen” that the wrath of God is being revealed from heaven.

Oddly, YEEs will occasionally offer resounding affirmations of the above truth, but will then negate those affirmations by making contradictory statements such as “Truly, many people have doubted the existence of God because of the absence of logical and evidential proofs—because God hasn’t just come out and said so.”6 This suggests that a denial of God is somehow reasonable or understandable, which is flatly at odds with the testimony of Scripture.7

God might withhold additional revelation from us to protect us from further judgment, depending upon how we respond to the light we have already received. An example of this could be Christ’s use of parables to hide truth from the multitudes.8 However, Scripture offers no hint or suggestion that this fundamental “knowledge of God” is in any way ambiguous or uncertain. If it were, then sinful men and women might indeed have an excuse on the Day of Judgment.

What About the Flood?

YEEs might object that even if our knowledge of God Himself is certain, knowledge of the global Flood must be ambiguous since the only way we can know of the Flood is from Scripture. And since uniformitarians reject Scripture, so the argument goes, their denial of the Flood is reasonable or at least understandable. However, the Bible says otherwise. Scripture makes it clear that those who deny the Flood are “scoffers...walking according to their own lusts” who “willfully forget” this fact of history.9 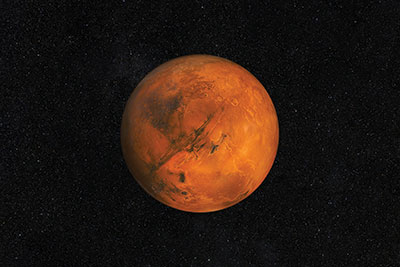 Figure 1. Uniformitarians think past catastrophic flooding occurred on Mars, even though today there is no liquid water on its surface.
Image credit: NASA

Yet, the same kinds of geological features that led them to infer flooding on Mars are also present here on Earth. More than 70% of Earth’s surface is underwater, and the continents are covered by water-deposited sediments that hardened into rock.12 Moreover, the fossilized remains of billions of plants and animals are entombed within those water-deposited rocks, and fossils of terrestrial and aquatic creatures are often jumbled together.13,14 Sedimentary megasequences stretch across entire continents (Figure 2).15 If flooding on Mars is a reasonable inference from the geological data, then how much more so is flooding here on Earth! Furthermore, the existence of these continent-spanning sedimentary sequences implies that this was at least a regional watery cataclysm.

Although it is certainly true that one needs Scripture to learn the historical details of the worldwide Flood, there is nothing ambiguous or uncertain about the geological evidence for that event. 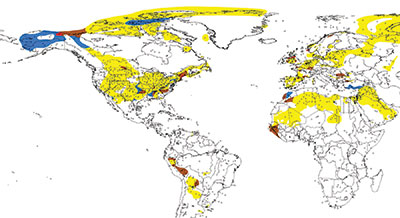 Can’t all Christians agree that biblical faith, or belief, at least implies a certain conviction that the claims of the gospel are true? How can you believe the gospel if you aren’t sure that it is true? Faith or belief seems to demand certainty. And the Bible places a great emphasis on certainty and assurance when it comes to faith.16 The Bible’s very definition of faith contains the word evidence in it.17 That doesn’t sound at all like the unsupported, subjective “faith” of the fideist.

However, some clarifications are necessary. One must be certain that the gospel is true in order to believe it, but belief does not necessarily require the ability to articulate why one believes. Yes, we are commanded to “be ready to give a defense”18 for our hope, but the very fact that the apostle Peter gives us this command makes it clear that Christians, unfortunately, might not always be fully prepared to do so.

Likewise, belief does not require that I know the answer to every objection that a skeptic could raise to Christianity or biblical creation. Given our limited knowledge, this is clearly impossible. However, it is possible to be so certain and confident in the truth of the gospel that I am not swayed even when presented with an argument or objection to which I do not know the answer.

If a fideist is convinced that faith is supposed to be uncertain, then he will oppose claims that the truths of Scripture can be known with certainty. This will be true not just of doctrinal truths but of the historical facts presented in Scripture. YEEs tend to be very critical of “traditional” creationist ministries like ICR, claiming that we frequently overstate the strength of our position. I once heard a fideist-leaning creationist tell a group of creationist college students that when he was young there were no creationist resources that he could trust, a not-too-subtle denigration of the work of creationist pioneers Drs. Henry M. Morris and Duane Gish. 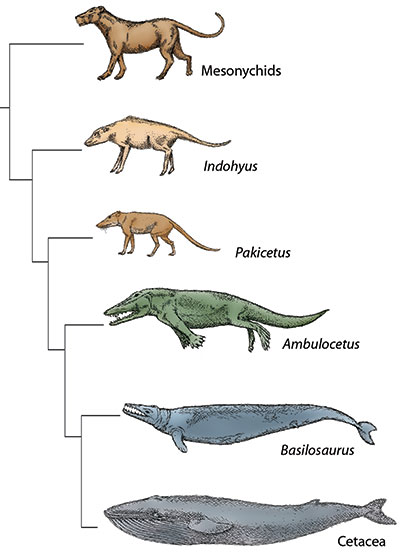 Yet, YEEs credulously accept absurd evolutionary claims at face value. One YEE suggested that “walking whales” on Noah’s Ark evolved into today’s whales after the Flood!19 When one considers the enormous anatomical challenges involved in such a transformation (Figure 3), the idea is simply preposterous. It’s hard to believe that a creationist would endorse it.

YEEs uncritically accept the claim that evolutionists have many fossils that are good candidates for “missing links.”20 They also claim the earth is young but looks old.21 ICR has addressed this fallacious claim elsewhere.22 Not too surprisingly, evolutionist and bitter opponent of biblical Christianity Richard Dawkins has given one YEE qualified praise for being an “honest” creationist.23

One notices a pattern: YEEs tend to play up supposed evidence for evolution while playing down evidence for creation. Is this because the evidence is truly equivocal and we creationists have been overstating our position? Or is it because YEEs are philosophically opposed even to the possibility that the evidence could strongly favor creation?

It’s easy to see why a world hostile to Christianity would embrace the notion that evidence for the Christian faith is lacking. It lets rebellious sinners off the hook. They have no reason to “flee from the wrath to come”24 if past evidence for God’s wrath displayed in the global Flood is ambiguous.

And it would certainly be tempting for persecuted Christians in academia to take this position. Likely it isn’t our belief in creation and the Flood per se that offends so many people, it is our claim that these things really happened and that the judgment of the Flood is a solemn warning of God’s future judgment. So, telling the world that our belief in a future judgment isn’t based on evidence would certainly make Christians more popular in academia. It would also be a quick and easy way to remove the “conflict” between the claims of Scripture and secular scientists.

However, the faithful Christian cannot do this. The Bible makes it clear that God-deniers are without excuse and that fearful judgment awaits those who do not repent and believe in Christ. Telling a hell-bound sinner that his denial of God is in any way reasonable is one of the cruelest things a Christian can do. It might be just as bad as saying “A loving God would never send anyone to hell.” To suggest that the evidence for creation and God’s past judgment of the earth is somehow ambiguous is to lull the lost person into a dangerous sense of complacency regarding the spiritual danger confronting him.

Here at ICR, we see evidence that young-earth evolutionism is bearing some very bad fruit. A reliable firsthand witness told me that a graduate student at a conservative creationist university is in danger of falling away from the faith after prolonged exposure to the YEE teachings of that school’s faculty members. Is anyone really surprised by this?

Biblical creationists cannot afford to get this wrong. Affirming a recent creation and a global flood is meaningless if one claims that evidence for these things is ambiguous or equivocal. Biblical creation is true, and the scientific and historical evidence strongly confirms this.