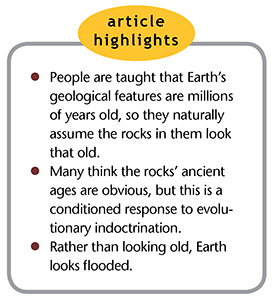 Some might argue that Earth’s rocks are obviously ancient even apart from radioisotope dating results. In response to creationist claims, they might ask, “If the earth was created just 6,000 years ago, then why does it look so old?” But does Earth really look old?

Many people see rock layers like the ones in Grand Canyon and immediately assume they’re millions of years old. But does anything about the rocks themselves indicate vast ages? If you think the answer is yes, take a moment and try to explain why you think that’s the case. Saying “Well, everyone knows the rocks are old” is not a good answer because then you have to ask “How is it that people ‘know’ this?”

The answer is indoctrination, plain and simple. Growing up, we’re taught this repeatedly through books, television shows, movies, and the educational system. So, it’s hardly surprising that many people reflexively think it’s obvious that rock layers are millions of years old. But is that conclusion drawn from scientific data, or is it a conditioned response to years of evolutionary claims?

Think about it. If someone is told since childhood that Grand Canyon rock layers are millions of years old, at some point this person mentally associates those rocks with “millions of years.” Later, when he is shown pictures of Grand Canyon, it seems obvious its rocks are extremely ancient.

Creation scientists would argue that clues within these rocks strongly suggest their water-deposited strata were laid down quickly and catastrophically, not slowly over millions of years. These clues include fossils embedded through multiple rock layers, lack of erosion between flat rock strata, and tightly folded layers.1-3

The carving of Grand Canyon is also best explained as a rapid, catastrophic process that didn’t take millions of years.4 Even recent erosion of the freshly deposited sediments in nearby Lake Mead resemble a miniature Grand Canyon, with vertical cliffs and slopes. These cliffs formed just in the last few decades.5

Many scientists claim radioisotope dating methods prove Earth’s rocks are millions of years old. However, these are calculated ages based on assumptions about the past. Creation researchers have shown that many of these assumptions are flawed. Different radioisotope dating methods give different ages for the same rocks, and age estimates often contradict both eyewitness testimony and common sense.6

Creationists have long pointed out that Earth doesn’t really look old. It is covered by a relatively thin layer of water-deposited rocks over much of its land surface, and more than 70% of its surface is underwater. Earth looks flooded, just as it should if the worldwide Flood described in Genesis was a real, historical event. Earth’s rocks don’t look old because they aren’t old.