In contrast to secular scientists, creation researchers think there was just one Ice Age that was caused by the Genesis Flood.1 Intense volcanism and rapid seafloor spreading during the Flood would have greatly warmed the world’s oceans. This would have resulted in a tremendous amount of evaporation. The increased atmospheric moisture produced intense snowfall on mountaintops and at high latitudes. Summer cooling caused by residual post-Flood volcanism prevented snow and ice from melting, allowing thick ice sheets to grow rapidly after the Flood.

Recent ICR research has highlighted a devastating problem with the main argument for the secular Ice Age theory, found fossil evidence in support of the Flood Ice Age model, and revealed clues that secular age models are assigning too much time to the deep Antarctic ice cores.2-4 ICR has also just published my book explaining the Flood Ice Age model and how it relates to the global warming debate.5

In many ways, the Flood Ice Age model is vastly superior to the secular model. It solves mysteries of Earth history that still puzzle uniformitarian scientists, such as the ability of millions of woolly mammoths to live in Siberia during the Ice Age.1 However, one area in which the creation model lags behind the secular model is in computer simulations of thick ice sheets. Recently, I extended ICR atmospheric scientist Dr. Larry Vardiman’s numerical creation-based ice sheet model, which assumes heavy post-Flood ice accumulation.6 I used a computer code and his ice accumulation model to estimate annual layer thicknesses in a simulated ice core. My resulting paper has been accepted for publication. 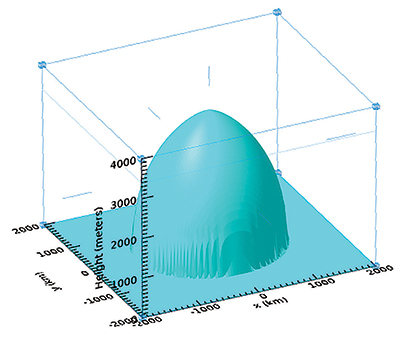 Growth simulation of a 3,400-meter-thick ice dome in the 4,500 years since the Flood. Height exaggerated for clarity.
Image credit: Jake Hebert

Uniformitarian age models for the thick ice sheets implicitly assume millions of years by treating the height of the ice sheet as more or less constant. This simplification makes the math much easier, but it is obviously invalid if the ice sheets are just 4,500 years old.

As Vardiman himself noted, his effort was preliminary, and it’s necessary to improve on those early efforts. It’s possible to directly calculate the growth and movement of an ice sheet by summing up the stresses (force per unit area) acting on the small parcels of ice that comprise the overall ice sheet. This approach doesn’t make the usual “millions of years” assumption, but it can require so much computing time that uniformitarian scientists would probably never use it to simulate the entire history of a millions-of-years-old ice sheet. However, one could use it to simulate the rapid formation of an ice sheet in the few millennia since the Flood.

I have done this in a second research paper. I used the simplest possible (and fastest) version of this approach, along with Vardiman’s ice accumulation model, to simulate the growth of a 3,400-meter-thick ice dome in the 4,500 years since the Flood. Not too surprisingly, a thick ice dome rapidly forms when accumulation rates are high. The next phase of the research is to do this again with a more sophisticated version of this approach.

As always, we thank you for your generous support of the Institute for Creation Research that makes this research possible.

Humans Used Fire Earlier Than Believed
According to standard notions of human evolution, the controlled use of fire represented a key turning point in the development of modern humans from...
BY: BRIAN THOMAS, PH.D.

Another Failure to Recreate Life's Origins
A new study by NASA scientists has just been published where researchers did nothing more than convert a pre-cursor chemical into a single type of amino...
BY: JEFFREY P. TOMKINS, PH.D.