ICR’s Column Project, which has been compiling stratigraphic data from across the globe, is currently examining Turkey’s geology, including the area around Mt. Ararat. One question of interest is when and where Noah’s Ark came to rest. Our results might surprise some people.

The Genesis Flood account says “the waters prevailed” for 150 days (Genesis 7:24) and decreased at the end of the 150 days (Genesis 8:3), leading us to conclude that’s when the Flood peaked. The Ark landed on the same day: “Then the ark rested in the seventh month, the seventeenth day of the month on the mountains of Ararat [‘al harê ‘arârât]” (Genesis 8:4). This was 150 days after the Flood started on the 17th day of the second month (Genesis 7:11). 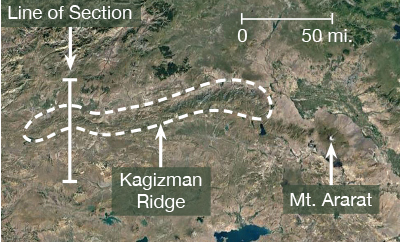 Figure 1. Google Earth image of the area around Mt. Ararat, including Kagizman Ridge. The line of the section depicted in Figure 2 is shown.

Northeastern Turkey is composed of tectonic plates that were squeezed together during the Flood as Africa and Eurasia collided. The crustal rocks consist of highly metamorphosed Mesozoic sediments and ocean crust that were caught between the colliding plates.2 Uplift of this crustal complex produced a prominent ridge—with “ridge” here matching the Hebrew phrase “mountains/hills of Ararat”—known as Kagizman Ridge. This ridge extends east-west for over 100 miles, with some peaks standing over 10,000 feet in elevation (Figures 1 and 2).3,4 This topographic ridge existed prior to the Eocene (Early Tertiary)4 and likely developed close to the end of the Cretaceous, placing its formation on or about Day 150 of the Flood.

Figure 2. Schematic of north-south section (from Figure 1) showing the geology of Kagizman Ridge. Adapted from reference 4.

After the ridge was emplaced, volcanoes spread lava and ash across the region that intermingled with Tertiary marine sedimentary deposits from the Flood’s receding phase—post-Day 150—creating the Erzurum-Kars Plateau.2 These Paleocene through Pliocene strata allow us to work out the relative timing of the volcanism in the area.4 What is today labeled Mt. Ararat was part of a later and final pulse of volcanism, much of which sits atop the earlier volcanic rocks of the Erzurum-Kars Plateau. Most of the eruptive activity at the current Mt. Ararat was after the Flood during the ensuing Ice Age.3 It appears the Ark couldn’t have landed there since it probably didn’t exist then, at least not to any large extent.

Where did the Ark land? The Kagizman Ridge is the most likely candidate because it was formed about Day 150 and is part of a continuous mountain belt that extends for over 100 miles west of Mt. Ararat (Figure 1), making it part of the “mountains of Ararat.” The Ark probably settled on one of the higher peaks of Kagizman Ridge as the area was thrust upward. Later, receding-phase sediments and subsequent volcanic activity filled in the basins on the flanks of the ridge. Mt. Ararat likely didn’t begin to form until well after Noah had vacated the Ark.

The Ark did land in the “mountains of Ararat,” just not on Mt. Ararat itself. Simultaneous development of a high topographic ridge at just the right time and location in the Flood year demonstrates the truthfulness of God’s Word and His perfect timing. God truly remembered Noah (Genesis 8:1).