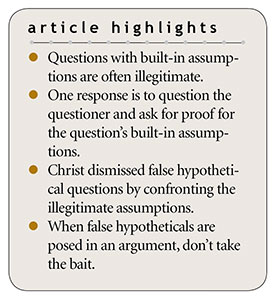 At a recent ICR event in Massachusetts, an attendee asked a trap-loaded question: “Some say that minor errors in the Bible are okay because they don’t hurt the Bible’s main message—but how do you deal with the Bible’s errors?” The scoffer added, “How do you fix your theology when new scientific discoveries prove that your literal belief in the Bible doesn’t work?”

Notice how the critic’s leading questions included built-in assumptions: “The Bible contains errors. Your theology is broken. Science disproves the Bible. A literal belief in the Bible is unreasonable.” They are similar to this unfair question: “Yes or no, have you stopped beating your wife?”

Beware! Before you let a critic’s question put your faith on trial, put the question itself on trial. Judge it for legitimacy—it might be deceptively illegitimate.

Speaking of trials, such sophistry is routinely rejected in real-world courtroom trials, such as when a witness is asked a question that prematurely presupposes unproven facts. What if the question assumes wet weather associated with some event yet there was no report of rain at that time and place? Or what if the question is about how certain medicine dosages affect humans yet there is no evidence of those dosages being tested on humans?

The proper response to a false hypothetical in a courtroom context is: “Objection, the question assumes facts that are not supported by the evidence.”1 However, most people don’t play by forensic evidence rules, so unsubstantiated assumptions (including groundless name-calling) are often used as a substitute for real proof.2 So, how should we, as believers, respond? Reply that such questions are defective and misleading as asked because they contain false hypotheticals that require assuming unproven allegations.

To the Massachusetts challenger, I countered: “You assume that Scripture contains scientific errors, but I reject that assumption. You need to identify a few examples of these so-called errors—or even just one—then we can discuss your question using specific topics that exist in the real world.” Unsurprisingly, the challenger had no example available despite his boast that Scripture contained lots of errors.3 Like him, other skeptics often ask similar questions using false hypotheticals as bait in debate-like discussions.

When they do, tell them they may be entitled to their own hypotheticals but not to their own universe—God rules the real universe. The Lord Jesus illustrated this when He dismissed a question as illegitimate while faulting the Sadducees for ignoring God’s Word and God’s sovereign power over human affairs.4 Random hypothetical scenarios are not guaranteed to occur in the universe just because we can imagine them.

In summary, don’t automatically assume that a hypothetical scenario can occur unless and until there is real evidence that it actually does occur. God’s Word is sure. God makes sure that the universe never contradicts what He has said in Scripture. God’s truth rules and matches the real world. So, don’t be baited by false hypotheticals!