A Well-Watered Land: Effects of the Genesis Flood on Precipitation in the Middle East | The Institute for Creation Research
Skip to main content

ACTS & FACTS     IMPACT     THE GLOBAL FLOOD IS THE KEY TO THE PAST
A Well-Watered Land: Effects of the Genesis Flood on Precipitation in the Middle East
BY LARRY VARDIMAN, PH.D. *  |
TUESDAY, MAY 31, 2011 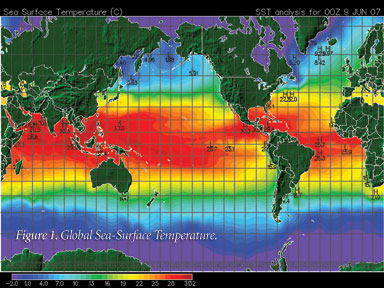 Scripture and paleoclimatology indicate that the Middle East had more trees and grass in the past. Several theories suggest that the climate is drier today because of overgrazing, cutting of forests, or geological change. However, no one has seriously considered the effects of the Genesis Flood.

This author and Wesley Brewer modeled a tropical cyclone in the arabian sea for hot sea-surface temperatures (SSTs) and showed that a warmer ocean would produce hypercyclones and greater precipitation over the entire Middle East.1 Catastrophic heating of the oceans during and following the Genesis Flood likely resulted in greater precipitation over the Middle East for over 1,000 years that supported more vegetation in North Africa, Egypt, Sudan, Israel, Saudi Arabia, Iraq, Iran, Pakistan, and Afghanistan.

In 2000 B.C. (approximately 500 years after the Genesis Flood), according to the Ussher chronology, Abraham and Lot decided to divide their flocks and go their separate ways because the land could not support their large herds and because of dissention among their herdsmen (Genesis 13:6-7). At that time they were living near Bethel in Canaan. Abraham gave his nephew Lot the choice of where he wanted to dwell. Lot chose the plain of Jordan in which to live.

Lot lifted up his eyes, and beheld all the plain of Jordan, that it was well watered every where, before the Lord destroyed Sodom and Gomorrah, even as the garden of the Lord, like the land of Egypt, as thou comest unto Zoar. (Genesis 13:10)

The Bible identifies the plain of Jordan as the region between Succoth and Zarthan north of Jericho (1 Kings 7:46). This area along the Jordan River from the Sea of Galilee in the north to Zoar at the south end of the Dead Sea is described as well-watered, like a garden. Zoar was one of the five cities of the plain (Sodom, Gomorrah, Admah, Zeboiim, and Zoar) on the southeastern shore of the Dead Sea. It is likely that the higher terrain to the west and east of the plain of Jordan would have been even wetter, because the hills would have been cooler and would therefore have received more rainfall.

The description of a moist, fertile landscape in Abraham’s day is in stark contrast to the dry, desert environment of the Jordan Valley that exists today. Only near springs and along the riparian boundary of the Jordan where modern irrigation is practiced are any trees and green vegetation evident. The rainfall in the Jordan Valley south of the Sea of Galilee is so sparse that practically no vegetation of any kind is possible without irrigation in the hot, desert environment. Yet, as late as 1,000 years after the Flood (~1500 B.C.), about the time the Israelites were to enter the Promised Land, Palestine was described as “a land flowing with milk and honey” (Exodus 33:3). In addition to the biblical hints of a wetter climate in Israel during the time of Abraham and Moses, paleoclimatological evidence also indicates that the entire Middle East experienced more precipitation, had more vegetation, and lakes were fuller.

In the 1960s, images of seafloor topography were first published showing a mid-ocean ridge on the bottom of the ocean that extends completely around the earth.2 It is about 40,000 miles long, up to 6,000 feet high relative to the ocean floor, and, in places, several hundred miles wide. It is composed of lava and magma that were ejected from the earth’s mantle between tectonic plates onto the ocean floor at temperatures over 900ºF. 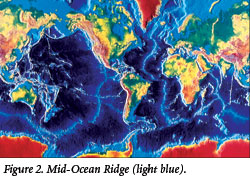 The catastrophic plate tectonics model of Austin et al proposed that the mid-ocean ridge is the result of cooled lava and magma formed in only a few years during and immediately following the Flood.3 The conventional view is that the molten rock was released during millions of years, warming the ocean only slightly. However, if the Genesis Flood occurred only a few thousand years ago, the heat would have been released from the mid-ocean ridges in a much shorter time, causing the oceans to warm dramatically. The average ocean temperatures derived from foraminifera in sea-floor sediments show that the oceans were indeed much warmer (as warm as 95ºF) during the Cretaceous Period. Hot oceans would have created hot SSTs and increased evaporation following the Genesis Flood.

This author previously modeled Hurricane Florence in the Gulf of Mexico that developed into a hypercane (gigantic hurricane) because of hot SSTs.4 I found that wind speeds for SSTs of 104ºF or hotter could form hypercanes with winds twice as fast and precipitation ten times greater than any observed today. Hot SSTs in the Arabian Sea near Saudi Arabia would be expected to form similar storms. 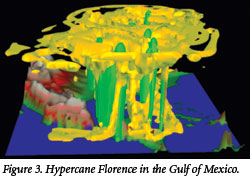 The computer model used to simulate the cyclone was the Weather Research and Forecasting (WRF) model provided by the National Center for Atmospheric Research. WRF is a mesoscale computer model that computes wind, humidity, precipitation, and many other variables over a three-dimensional grid at selected locations and resolutions on the earth. Tropical Cyclone Gonu, which occurred in the Arabian Sea in 2007, was successfully simulated at SSTs observed today. By increasing the SST to 104ºF, a hypercyclone was generated with much greater wind speeds and precipitation. The circulation pattern over the entire Middle East was also changed by the increased SSTs and the presence of the hypercyclone. This led to major increases in precipitation throughout the Middle East. 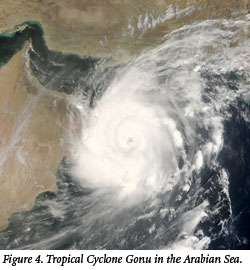 The closed circulation of simulated Hypercyclone Gonu entered Iran from the Gulf of Oman and the hot SSTs of the Arabian Sea established a large-scale, counterclockwise circulation at low altitudes over the entire Middle East centered on Saudi Arabia, as shown in Figure 5. After 18 days of simulation at 16,400 feet in altitude, a low-level jet of high-speed winds flowed southward over Egypt, eastward across the Gulf of Aden, and north-eastward through the Arabian Sea into Pakistan, Afghanistan, and Iran. Closed circulations and other disturbances flowed southward from the Mediterranean Sea into Egypt in the western portion of this large-scale circulation. Disturbances also traveled into Iran along the northward portion of the flow from the Arabian Sea.

The large-scale circulation over the Middle East in this simulation is thought to be due to the general heating from all the hot oceans surrounding Saudi Arabia. Smaller-scale circulations like the one that moved from the eastern Mediterranean southward over Egypt are due to localized organization of storms. It is also likely that short waves moving along the jet stream flowing from west to east in Europe can ride the larger circulation pattern around Saudi Arabia and move farther south, creating storms over the deserts of the Middle East. 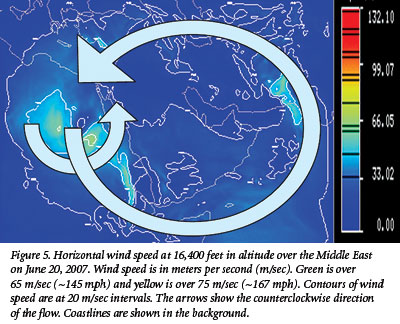 The large-scale circulation covering the Middle East in this simulation is not observed today. It was probably responsible for transporting water vapor and precipitation into the desert regions of the Middle East for 1,000 years or more after the Flood. This is probably the explanation for greater vegetation in these regions during the past. 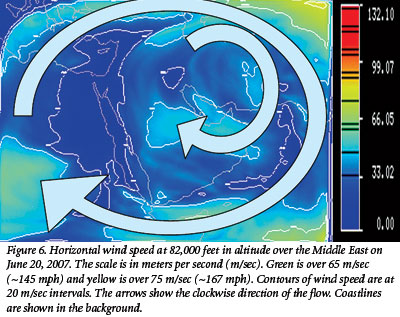 Figure 7 shows the relative humidity at 49,000 feet in altitude for June 20, 2007, after 18 days of simulation. High relative humidity is shown in red and low relative humidity in blue at a mid-level of the atmosphere. At surface levels and above the tropopause, high humidity is widespread. A large region of high humidity became permanently located over the eastern end of the Persian Gulf and the northeastern region of the Arabian Sea. This large area of high humidity occurred in a low wind-speed region and was caused by high evaporation over the hot SSTs in the Arabian Sea. This humidity drifted over Iraq, eastern Saudi Arabia, Afghanistan, Pakistan, and northward to the Himalayas. 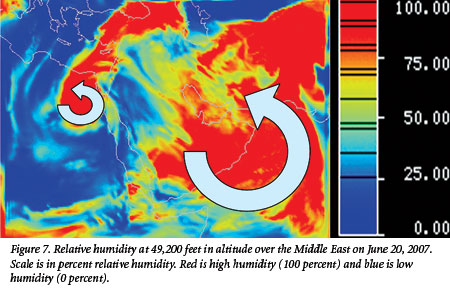 Because stronger winds to the east blew northward from the warm Arabian Sea uphill to the Himalayas, large quantities of precipitation likely flooded the Indus River Valley. The condensation of large quantities of humidity to rain over the Himalayas would have formed a permanent, highly efficient chimney to lift moisture into the upper atmosphere. This moisture would have been transported by upper-level winds horizontally to fall as rain for long distances downwind. In the western edge of Figure 7, a region of high relative humidity is associated with the cyclone near the surface that drifted southward from the Mediterranean over Egypt in the counterclockwise circulation. 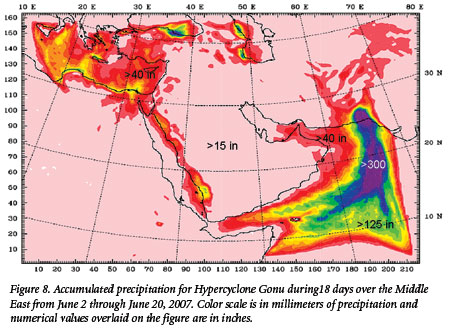 Figure 8 shows the accumulated precipitation over the Middle East from 00Z, Saturday, June 2, 2007, to 00Z, Wednesday, June 20, 2007. This was the entire period of simulation for Hypercyclone Gonu. The maximum accumulated precipitation for the 432-hour (18-day) period was over 300 inches in a north/south swath from the central Arabian Sea to Pakistan, centered over Karachi. This region of heavy rain occurred in conjunction with the continuous low-level jet from south to north over the Central Arabian Sea. The average rainfall rate was equivalent to about 0.75 in/hr. This rate of rainfall over the 18-day period would have produced massive flooding in the lower Indus River near Karachi.

A region of greater than about 40 inches accumulated precipitation for the 432 hours covered almost the entire Arabian Sea, the Gulf of Oman, and most of Pakistan. In addition, an accumulation of more than about 40 inches covered most of the Mediterranean region, northern Egypt, and the eastern shore of the Red Sea during the entire period. The average rate over the 18-day period for these regions would have exceeded about 0.1 in/hour, but was probably highly variable. Even in the driest deserts, the rate of rainfall over the 18-day period was greater than about 15 inches, with an average rainfall rate of about 0.04 in/hr. The Middle East was much wetter than today under these conditions.

Throughout all of the Middle East, more than 15 inches of rain fell during this simulation, producing much wetter conditions than are now present. There are places in the deserts of North Africa and Saudi Arabia today where no rain has fallen for decades. The only vegetation in these deserts is found at oases located at the foot of wadis or near subterranean sources of water. When occasional rain falls, vegetation springs up quickly, but only lasts for a short time. Under the conditions simulated in this study, it is likely that permanent vegetation would cover most of the sand and rocky soil in these regions. Hints of a well-watered land in Israel and throughout the Middle East seem to be borne out if catastrophic events of the Genesis Flood are taken seriously.

The mesoscale meteorology model (WRF) and topographical and meteorological data used in this study were provided by the National Center for Atmospheric Research. This research was funded by the Institute for Creation Research.

Summary of Megasequences across Africa and the Pre-Floo.,.
Dr. Clarey shifts focus from North America to Africa. How does the African continent show a similar geological story? How can we know the Flood...
BY: TIM CLAREY, PH.D.
More Impact